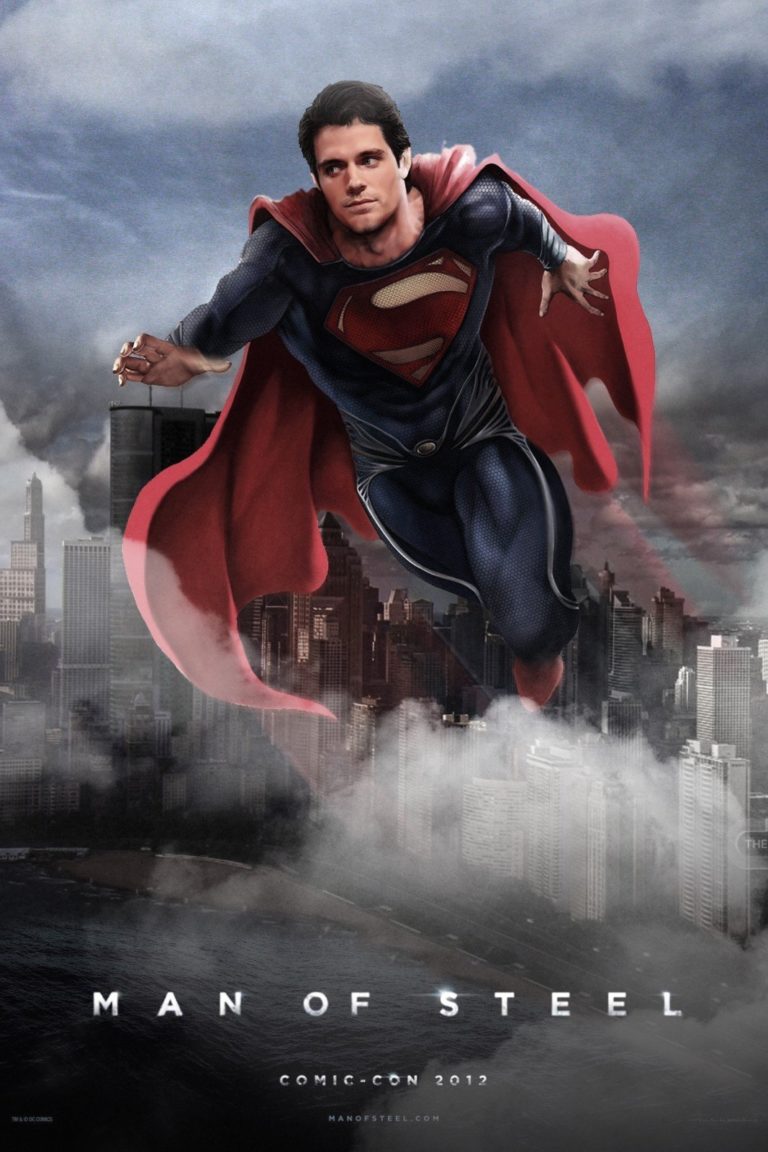 MAN OF STEEL brings Superman back, in a big way. Superman’s father launches his baby son in a spaceship to Earth, to save him from their planet’s destruction. The evil General Zod vows to find the son and take revenge. Years later, Superman keeps a low profile on Earth, but he can’t help himself saving people’s lives with his super powers. He’s just that kind of guy. Then, Lois Lane, the intrepid reporter from the Daily Planet, discovers Superman’s identity, and General Zod and his soldiers show up on Earth, demanding that Superman surrender to them. Will Lois reveal Superman’s identity? Can Superman trust General Zod if he surrenders?

Super-smart and super-cool, MAN OF STEEL is one of the most satisfying and most moving superhero movies yet. It has all the excitement you expect, but it also delivers a powerful, redemptive, heroic story. The script is brilliantly structured, with a great character arc for Superman. There’s even a major turning point scene in a church. MAN OF STEEL has some foul language and intense action violence, however. So caution is advised.

(CCC, BBB, PPP, LL, VV, N, A, M) Very strong Christian, moral worldview stresses faith, trust, hope, being a good role model, protecting the innocent, saving lives, sacrifice, and doing the right thing despite personal cost with an important turning point scene is set in a Christian church with a stained glass image of Jesus prominently displayed where a young priest with a clerical collar is asked about an issue of trust, and he says sometimes you have to make a leap of faith and the trust will follow and lead general says “Godspeed” to a group of people setting out on a crucial mission against the genocidal villain, plus very strong Pro-American, patriotic, positive view of America and Americans, especially people in “the heartland,” and a strong positive, patriotic view of American soldiers; 13 obscenities (just one “s” word and a few “a**” words) and two light exclamatory profanities (OMG twice); lots of strong action violence includes much fighting, gunfights, explosions, beings with super powers crash into buildings, tornado crashes cars and blows one man away, spaceships firing lasers, spaceships trying to destroy Earth, man strains to hold large oil rig structure, Superman and other Krypton people use their heat ray eyes; no sex but a couple kisses; upper male nudity in one or two scenes; alcohol use in bar scene; no smoking or drugs; and, bullying but rebuked.

Superman is back – in a big way – in MAN OF STEEL, written by David Goyer (BATMAN BEGINS and BLADE) and directed by Zack Snyder (300, WATCHMEN, and LEGENDS OF THE GUADIANS: THE OWLS OF GA’HOOLE). Super-smart, super-exciting and super-rewarding, MAN OF STEEL is one of the most satisfying, most redemptive, and most moving superhero movies made yet. It even includes some overt Christian content. There is some foul language and intense action violence, however.

Like the first huge Superman movie in the late 1970s, MAN OF STEEL begins on the planet Krypton. Superman’s father, Jor-El, is helping Superman’s mother give birth to little Kal-El, aka Clark Kent aka Superman. It’s the first natural birth in centuries on Krypton, a highly technological society that’s lost touch with its own humanity. The planet is being destroyed by its own people. The Kryptonians have stopped their exploration of space and turned inward, but in their search for energy, they have irreparably damaged the planet’s core.

Jor-El realizes the society and the planet are doomed. No one has listened to his warnings. So, he and his wife have decided to send their baby on a spaceship to Earth, where Jor-El has special plans for his son that no one can fathom.

Meanwhile, the evil General Zod tries to take control of Krypton, but Jor-El stops him. Zod and his officers are arrested and sentenced to the Phantom Zone. However, in the process, Zod kills Jor-El.

Cut to years later on Earth. Little Kal-El has become Clark Kent, from Kansas. Clark has tried to hide his growing superpowers, in fear that people won’t understand. Even so, he keeps using his powers to save people’s lives, then having to move on.

Everything changes when Clark discovers his Kryptonian heritage. Then, Lois Lane, the intrepid reporter from the Daily Planet, discovers Clark’s true identity. Soon, General Zod and his soldiers show up on Earth, demanding that Clark surrender to them. Will Lois reveal Clark’s true identity? Can Clark trust General Zod if he surrenders? What will the American military do?

MAN OF STEEL has all the bells and whistles moviegoers might expect from a new blockbuster action adventure movie about Superman. Most of the scenes play true and contain strong performances from all concerned. It’s also brilliantly structured, with a powerful character arc for the title character. Each encounter Superman has with other people, each life he saves, hones his character and influences the decisions he makes. When he’s asked to surrender to Zod, for instance, Superman seeks solace in a Christian church. Superman tells the priest he knows he can’t trust General Zod, but he’s not sure whether he can trust the humans. With a stained glass picture of Jesus behind them, the priest tells him that, sometimes, if you take a leap of faith, trust will follow. Other similar scenes contain a clever use of flashbacks. For instance, several times, the movie flashes back to important incidents in Superman’s life as a boy with his adoptive parents, Jonathan and Martha Kent. Eventually, Superman becomes the positive role model for the humans that his biological father wanted him to be, and his faith and trust are rewarded.

Hope is another theme in the movie. Superman tells Lois that the “S” on his chest is his family’s motto and it means “hope.” That’s what Superman gives the humans when Zod reveals that he intends to kill all the humans so that Earth can become a new home for the Krypton race.

All of this gives MAN OF STEEL a very strong Christian, redemptive and moral worldview. The movie extols many positive values, including faith, trust, hope, being a good role model, protecting the innocent, saving lives, sacrifice, and doing the right thing despite personal cost. MAN OF STEEL does contain some foul language, however, and intense action violence, so caution is advised. The worst foul language, though, seems to come from the bad guys, and never from Superman.

Rent or Buy MAN OF STEEL: