"Heroes Comes in All Sizes" 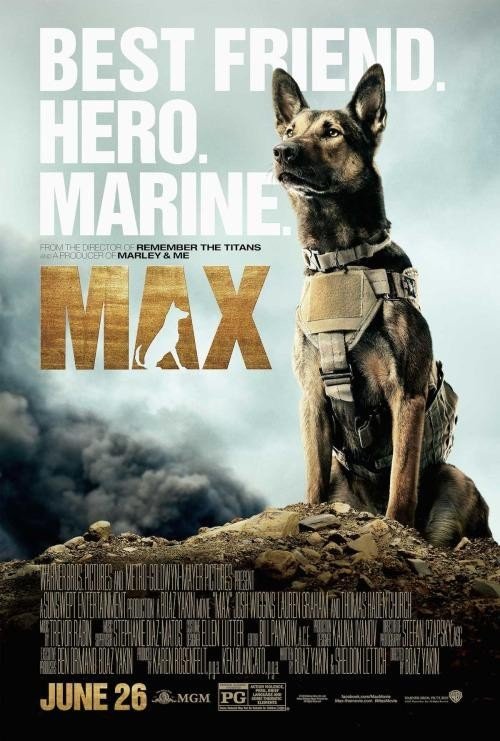 Primarily set in Texas, MAX follows Justin Wincott, a teenage boy who plays video games and gets in trouble from time to time. His older brother Kyle is fighting the war in Iraq along with his trusty army trained canine, Max. When disaster strikes in war, the Wincotts are heartbroken to find out their son, Kyle, has been killed in combat. At the funeral, Max, the army dog, is inconsolable, except by Justin. When the army is forced to put Max down, the Wincott family offers to take him in and Justin is put in charge of Max. However, trouble brews, and Justin and Max must save the day. MAX is both funny and heart wrenching. The Wincott family is very lovable and relatable. The worldview is strongly Christian, moral and patriotic. Max and Justin are courageous and risk their lives for each other and their friends. Because Kyle is in war, there are guns, explosions and a mean bad guy. Those times are few and far between, but cau-tion is advised for younger children when it comes to those scenes in MAX.

(CCC, BBB, PPP, L, VV, A, M) Very strong Christian, redemptive, moral worldview, including God is addressed in a biblical manner, woman makes comment to male character that “God knows what’s in your head and your heart,” main character’s friends talk about going to church, sacrifice and laying down your life for another is a major element, soldier sacrifices his life for his friend, dog sacrifices his life for Justin, and Justin risks his life for his dad, the father/son relationship holds a high priority as it’s mended throughout the movie; one use of “oh my God,” as well as a censored cuss word, along the lines of “frick” in which Justin’s mom corrects him for the use of the word; beginning takes place on war site with a lot of guns and explosions, soldier gets killed in combat, no blood, the viewer just sees his body in the aftermath, dog has war flashbacks, marine dog fights the “bad dogs,” man threatens boy and family; no sexuality; no nudity; a marine takes a flask out of his bag and takes a swig, character has a casual beer, no drunkenness; no smoking or drugs; and, friends call each other names, young teenager rips and sells pirated games but suffers the consequences, boy is disrespectful to his parents, confiscated army weapons are being sold illegally, a soldier’s best friend turns on the family, blackmail.

MAX is a Warner Bros. production, directed by Boaz Yakin (REMEMBER THE TITANS), that creates a heart-warming movie about a teenage boy, his family and his dog, Max. Primarily set in Texas, the Wincotts are living their everyday lives with their son Justin. Justin is the typical teenage boy, playing video games, being rebellious at times, hanging out with his friends. The other Wincott son is fighting the war in Iraq along with his trusty army trained canine, Max.

When disaster strikes in war, the Wincotts are heartbroken to see two marines making their way up to the front door of their home to tell them that their son, Kyle, has been killed in combat. At the funeral, Max, the army dog, is inconsolable, except by Justin. When the army is forced to put him down because of his PTSD, the Wincott family offers to take him. Justin is the most turned off by the idea, but is forced to be a responsible caretaker of Max and becomes very fond of him.

When a local thug threatens Justin about a few pirated video games, Max steps in to pro-tect him. However, it only escalates when a fellow marine of Kyle’s is forced to come home for unknown reasons. It comes to the knowledge of Justin quickly that this marine is attempting to sell confiscated war guns to the same thug. Unfortunately, Justin can’t do anything about this information because the marine and the thug threaten the safety of his whole family. MAX is funny, heartwarming and heart wrenching all at the same time. The Wincott fam-ily is very lovable and relatable as a troubled family attempting to function properly.

The worldview is strongly Christian and moral. Max and Justin are courageous and risk their lives for each other and their friends. Justin especially learns what it means to be heroic. These strong moments are inspiring and touching. There is PG violence in MAX that can be very scary for younger children. Because Kyle is in war, there are guns, explosions and a frightening enemy. Those times are few and far between, but caution is advised when considering young, impressionable children.