"A Spoonful of Sugar" 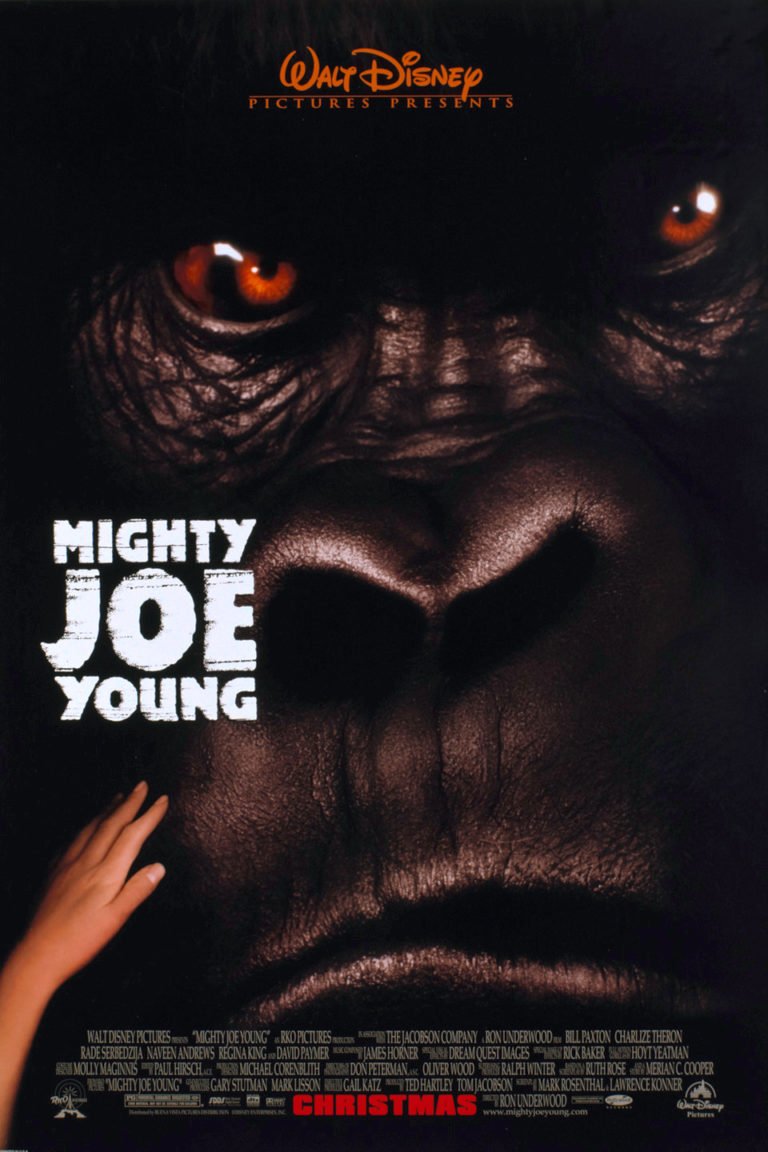 MIGHTY JOE YOUNG is not a monster movie; rather, it is a fantasy thrill ride about a big gorilla with a big heart. Jill Young, played when she grows up by beautiful Charlize Theron, takes care of a large, 15-foot-tall gorilla named Joe whose mother and Jill’s mother were killed twenty years earlier by an evil poacher. Zoologist Gregg O’Hara, played by Bill Paxton, convinces Jill to take Joe to California top keep him safe, but the evil poacher tracks Joe, leading to a final showdown and a scary moment where a child is threatened by a raging fire in an amusement park.

Although the details have changed, MIGHTY JOE YOUNG follows the pattern of the original 1949 fantasy. Unlike KING KONG, who is just a Hollywood ape, Joe is a compassionate gorilla. Thus, this story also has a clear environmentalist message. These messages are very low key, however. MIGHTY JOE YOUNG is a cut above recent Disney wildlife action adventure films, yet parents need to be cautious to point out some of the philosophic flaws to their children, after enjoying a very entertaining movie. Appropriate for seven and up, this movie contains some violence, a few very mild obscenities and scary scenes

(E, BB, Pa, Ev, LL, VV, A, D, M) Environmentalist worldview with strong moral points as well as some paganism & evolutionary elements; 8 mild profanities all of which are exclamatory “Oh, God” & “Oh, my God” type semi-appeals to Deity to save the speaker & 3 very mild obscenities; moderate violence which was not glamorized though sometimes heart-breaking such as the death of Mighty Joe Young’s mother & Jill Young’s mother, also some violence to physical property & out of control fire, children threatened by fire, & threatening gorilla, a man’s finger is bitten by gorilla, & man eventually killed by gorilla; some kissing & a rapport between Joe & the girl; some alcohol; some smoking; and, evil rebuked.

MIGHTY JOE YOUNG is not a monster movie; rather, it is a fantasy thrill ride about a big gorilla with a big heart.

In the beginning, the audience learns about a legend about a sacred guardian and defender of the wild life and the natives of a small African village. Dr. Ruth Young lives in the village with her little daughter Jill and studies the great gorillas that live on the mountain.

One day, Jill points out to her mother that the larger than average baby gorilla is the one that they named Joe. After checking out her daughter’s observation, Ruth notes that clearly there is a recessive gene making Joe grow bigger than his relatives.

Soon, an evil poacher named Strasser is leading some poachers up the mountain. They start shooting at the gorillas. Jill and her mother run to rescue the gorillas. Strasser shoots Joe’s mother. Joe retaliates by biting off Strasser’s thumb and index finger. Dr. Ruth grabs Joe and pulls him away, only to be shot by Strasser. Jill promises her dying mother that she will protect Joe.

Cut to twenty years later as zoologist Gregg O’Hara, played by Bill Paxton, drives into the village to track down the legend. He works for a California animal conservancy, which wants to help protect these rare gorillas. He hires a group of natives to go up on the mountain and finds 15-foot-tall highly intelligent gorilla with a heart, Mighty Joe Young. Joe gets upset that Gregg’s trackers have imprisoned a leopard. Joe opens up the cage and sets the leopard free, and then causes a little bit of havoc just to tell Gregg not to mess with his animals. Rather than be intimidated, Gregg tracks Joe, finally finding himself in a very precarious position. Upside down, he sees a vision of extraordinary beauty, the grown Jill Young played by Charlize Theron. He asks Jill to save him, and Jill tells Joe to drop him.

When he recovers from the fall, he follows Jill into the jungle only to find her playing hide and seek with the 15-foot gorilla. Gregg tries to explain to Jill that only by taking Joe to a nature conservancy in California can they protect him from the evil poachers. Jill finally relents after some poachers arrive in town.

When they get to California, they find that that the head of the conservancy wants to use Joe for fundraising. Jill is concerned that Joe is not ready.

Strasser in Africa sees a picture of Joe on TV. Somehow he recognizes him and goes to California as a wealthy benefactor to get revenge.

Joe recognizes Strasser immediately and becomes agitated. The night of the big party, his guests include a gentleman played by Ray Harryhousen, the father of stop action animation. Joe crashes the party to get Strasser, upsetting some of the guests.

The benefit turns out to be a bust. Some of the wealthy benefactors want Joe to be put to sleep, i.e., killed.

Jill and Gregg engineer a breakout and unwittingly enlist Strasser in their plans. The movie ends in an exciting chase sequence, followed by some fiery, nail-biting adventures in an amusement park.

Although the details have changed, MIGHTY JOE YOUNG follows the pattern of the original 1949 fantasy starring the legendary Ben Johnson. Unlike KING KONG, who is just a Hollywood ape, Joe is a compassionate gorilla. The story also has a clear environmentalist message: we must protect the environment from the evil poachers, capitalists, Germans and all those other bad guys. To a degree this is a good message, as far as protecting them from poachers, but the message becomes skewed when it develops religious and political overtones. The hints of religious beliefs not only manifest themselves in the talk about sacred legends, but also in the “evolved” development of Joe, who seems to understand and communicate with humans on a moral level, although he never speaks. The political message is the slightly veiled German/South African bashing, as well as calling on little children to give to their local environmental cause.

These messages are very low key, however. This movie is not a blatant in-your-face propagandistic movie. Perhaps, the reason for this is that there were several Christians on the movie including director Ron Underwood who attends a Presbyterian church in Los Angeles, and Ralph Winter, a supervising producer, who goes to a congregational Church. Therefore, the movie works very well as an action-adventure fantasy.

The acting is especially good. Not only by Joe, who is an incredible work of art, but also by Charlize Theron, who actually grew up on a farm in South Africa and is at home with animals in the jungle. As Bill Paxton noted in an interview, “Charlize is so good, that when she coaxes Joe out of the truck, saying ‘Come on out, big guy,’ you expect a guy to walk out of the truck, if you didn’t know that the truck was empty.”

Therefore, MIGHTY JOE YOUNG is a cut above recent Disney wildlife action adventure films such as KRIPPENDORF’S TRIBE. Clearly, this is a Disney film with an environmental agenda, and that merits some caution, even when it’s as well made as this movie. Children were cheering in the theater, and 13-year-old Robby Baehr loved MIGHTY JOE YOUNG (thirteen-year-olds are the target audience for this movie). Parents need to point out some of the philosophic problems to their children, after enjoying a very entertaining movie. Appropriate for seven and up, MIGHTY JOE YOUNG does contain some violence and scary scenes.