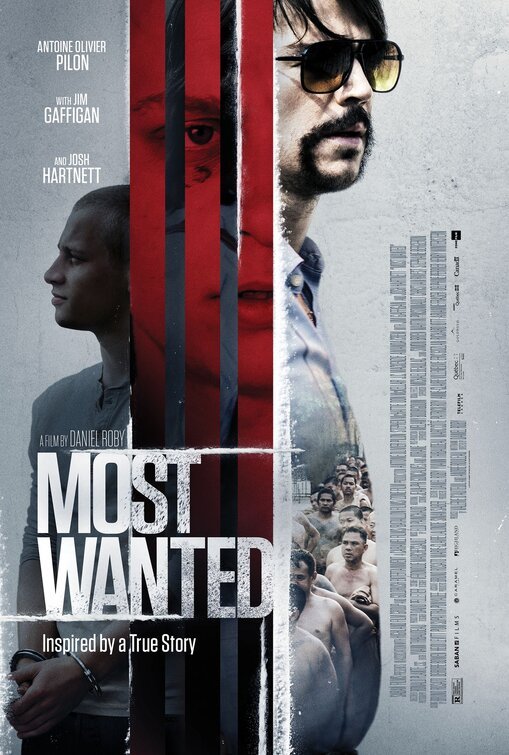 Set in 1989, MOST WANTED focuses on investigative journalist, Victor Malerek, as he tries to uncover the truth about a drug bust in Thailand. Daniel is the suspect. He claims he was working with the Canadian authorities at the time of his arrest, but they deny their involvement. Something smells fishy to Victor, so he travels to Thailand to see about things for himself. Will the threat of his family’s safety and the exposure of the Canadian officials prove too much for Victor and Daniel?

MOST WANTED has a strong moral worldview where one character in particular wants to uncover the truth to bring an innocent man home from prison. The movie extols family when a new father says that his wife and daughter come first. There are also strong humanist elements where characters rely on their own skills and abilities. In Thailand, Buddhists are seen praying at a Thai prison, and a character says that Zen Buddhism helped him through a hard time. Finally, MOST WANTED has lots of foul language, intense violence and drug content. So, MOVIEGUIDE® advises extreme caution.

(BB, HH, FR, C, Ho, LLL, VV, SS, N, A, DDD, MM):
Dominant Worldview and Other Worldview Content/Elements:
Strong moral worldview where one character in particular wants to uncover the truth to bring an innocent man home from prison, family extolled when a new father says that his wife and daughter comes first, with some humanist elements where characters rely on their own skills and abilities to accomplish a drug bust that goes south Buddhists seen praying at a Thai prison, and a character says that Zen Buddhism helped him through a hard time, one character seen with a cross tattoo, and two women dance seductively in the background of one scene, but it’s not clear if they’re lesbians, and a character makes a comment about his boat not being a gay cruise.
Foul Language:
125 obscenities (mainly “s” words with some “f” words) and 11 profanities including some strong Jesus profanities
Violence:
Strong violence includes two high stakes car chases, mention of suicide, character hits his face with a rock, male characters fight in prison including stabbing one another with some blood, but the stab wounds aren’t fatal, two men fall out of a moving truck causing one to die from a head injury, guns fired after a sting operation goes south, man’s face gets sliced, someone gets kicked in the face during a fight, robber tries to break into a house
Sex:
Two characters almost have intercourse but don’t go through with it, and two women dance seductively
Nudity:
Upper male nudity in several scenes, and one instance where a man is only in his underwear, and a woman is shown in a bra in one scene
Alcohol Use:
Characters have wine during dinner, character takes a beer after being offered one, and alcohol depicted on a houseboat
Smoking and/or Drug Use and Abuse:
Characters smoke drugs, cigarettes and cigars sporadically, man seen with needle sticking out his leg, character snorts drugs in jail, and heroin dealing forms the basis on the plot; and,
Miscellaneous Immorality:
Character steals a bike, character fakes getting beat up so that he won’t have to come clean to his boss, lying, corrupt government officials try to protect their own skin, but the truth wins out in the end.

MOST WANTED focuses on an investigative journalist as he tries to uncover the truth about a drug bust in Thailand and help an innocent man get out of jail. MOST WANTED has a mixed worldview with elements of morality but also some humanism where some characters look out for their own interests and contains lots of foul language, some intense violence and drug content.

The movie opens with a disclaimer that the story is based on true events from 1989. Cut to the action on screen. Daniel Léger, a young Canadian man works out in the forest. When Daniel gets off work, he steals someone’s motorcycle then goes to visit his mother who doesn’t let him inside. In the meantime, an investigative journalist named Victor Malerek jets off from work to be with his wife who’s just given birth to a baby girl.

Next, Daniel, who’s been clean from drugs for six months, goes to a houseboat where he meets a drug dealer named Picker who’s secretly working with the Canadian authorizes. Reluctantly, Daniel takes some drugs under Picker’s urging and wakes up the next morning with a job offer from Picker to work on the boat. Occasionally, though, Daniel exchanges his earnings for drugs. As Picker learns that Daniel is quick on his feet, he cuts him in on a drug sting operation the Canadian feds are working. Regrettably for Daniel, the deal goes south while they’re abroad in Thailand, and he winds up in jail.

Victor tells Daniel that, no matter what, he must please guilty. Daniel listens and winds up with a 100-year sentence. However, Victor doesn’t stop trying to get Daniel released, even though there are threats against his family’s safety.

MOST WANTED has compelling main characters helped by good performances from Josh Harnett as Victor and Antoine Olivier Pilon as Daniel. However, the movie follows an independent filmmaking style. For instance, many scenes are filmed with handheld cameras. This doesn’t distract but is obviously different from a major motion picture. Also, the order of events isn’t laid out for the viewer. Rather, the viewer sometimes has to piece together what’s present day or what’s the past.

MOST WANTED has a moral worldview where one character in particular wants to uncover the truth to bring an innocent man home from prison. The movie also extols family when a new father says his wife and daughter come first. There are also strong humanist elements where characters rely on their own skills and abilities. In Thailand, Buddhists are seen praying in prison, and one character says Zen Buddhism helped him through a hard time. Finally, MOST WANTED has lots of foul language, intense violence and drug content. So, MOVIEGUIDE® advises extreme caution.