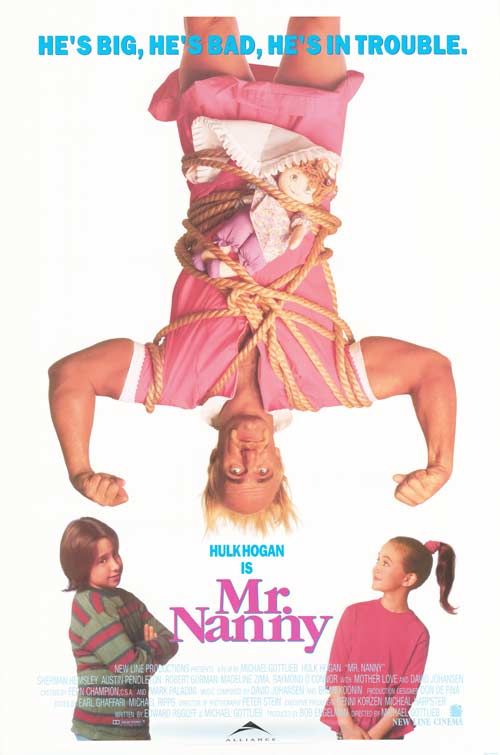 In the film MR. NANNY, wrestler Shawn Armstrong (Hulk Hogan) baby-sits two children when their nanny walks off the job, and the children, in turn, play some life-threatening tricks on him. Although the film contains foul language and slapstick violence, it does not have any sexual situations, nudity or sexual language.

In MR. NANNY, wrestler Shawn (Terry “Hulk” Hogan, the real-life wrestler) reluctantly agrees to serve as a body guard to help out a friend. He watches over a wealthy businessman’s two mischievous children when their nanny walks off the job. The two spoiled brats play tricks on him like jolting him with electricity and hitting him in the head with a bowling ball. Some attention and discipline, however, by Shawn seem to go a long way toward redirecting the children’s energy. Another plot involving the theft of the businessman’s top-secret computer chip operates on a parallel level. Violence erupts and it is a madcap scene to the end. Unfortunately, the humor in MR. NANNY falls flat.

This film loses focus and spends too much time on violence and malicious tricks by the young children. The movie starts with a recurring nightmare of a wrestling match containing beatings, scary costumes and leering faces. Even the cook dishes up violence, going after Mr. Nanny with a huge meat cleaver, a pan and a large metal rod. Although both children and adults utter foul language, the film does not have any sexual situations or nudity. The message is clear that children need love and discipline. Nevertheless, this movie continues the genre of the spoiled, bratty children with little respect for anyone, and the gratuitous violence and crude language spoil its meager merits.