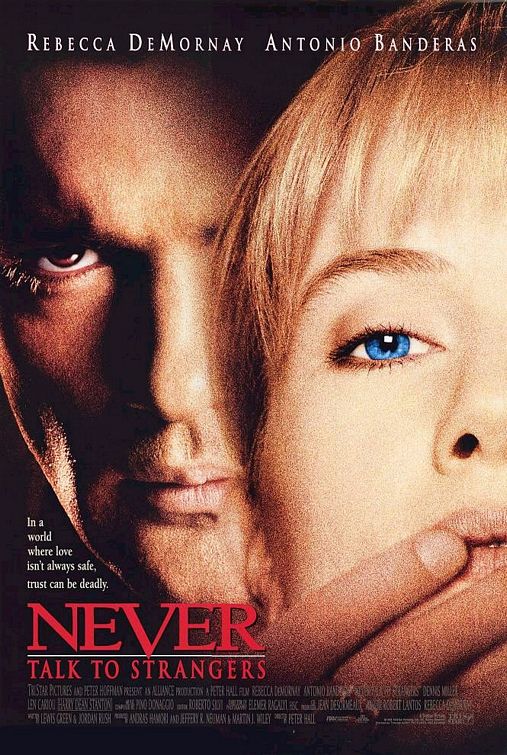 NEVER TALK TO STRANGERS is a psycho-sexual thriller starring Rebecca DeMornay and Antonio Banderas. The plot involves a psychiatrist suffering from multiple personality disorder who ends up stalking herself and wreaking havoc in her relationships. It is filled with sex and nudity and should be rated NC-17.

In NEVER TALK TO STRANGERS, psychiatrist Sarah Taylor (Rebecca Demornay) is having a problem with the people in her life. Her case work involves a rapist with a multiple-personality disorder. Her long lost alcoholic dad is attempting to make-up for the lost years. Her latest lover may be stalking her. Also, she has several personalities of her own to sort out. The plot builds when Sarah receives unwelcome packages in the mail such as dead roses and her mutilated pet cat. She even finds her own obituary in a newspaper. As the psychotic gifts and threats intensify, the film becomes a soft-porn, sado-masochistic mess. The surprise twist to this sordid tale is not that any of these men are endangering Sarah. She is out to get herself. She is a psychiatrist with an undiscovered multi-personality disorder, and it appears that one of the personalities is looking to rob, kill and destroy.

NEVER TALK TO STRANGERS is a nightmarish psycho-sexual thriller starring Rebecca DeMornay and Antonio Banderas. The plot takes a back seat in this thriller to the chemistry and fleshly antics of DeMornay and Banderas. There are numerous sexual scenes, embarrassingly excessive and that is, unfortunately, where the heart of this movie lies. NEVER TALK TO STRANGERS is a shocking film, not by any means for its good quality but because it attempts to push its R-rating to its furthest reaches.