"Thrilling Triumph of the Will" 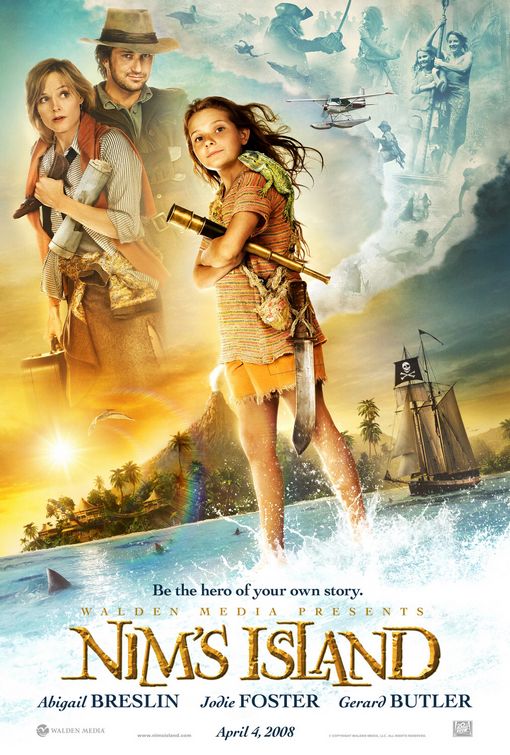 In NIM’S ISLAND, a little girl named Nim and her father, Jack, sail around the world to find her missing oceanographer mother. They turn an uncharted volcanic island in the Pacific into a paradise. One day, while Jack is out sailing studying micro-organisms, the author of Nim’s favorite adventure novels, Alex Rover (who is really housebound in San Francisco), strikes up an email conversation with Nim, thinking she’s Jack. Alex asks Nim about their volcano, so Nim climbs the volcano, but seriously injures her leg. With her father caught in a storm and cruise ship operators threatening to populate the island, Nim cries out for help from Alex, who’s hundreds of miles away.

NIM’S ISLAND is the type of fanciful adventure yarn that keeps you on the edge of your seat, making you laugh and cry. The fanciful filmmaking works. The acting is superb. The movie teaches self-reliance, loyalty, keeping one’s word, and love for one another, but also an environmentalist message that animals are people too. Furthermore, God is strangely absent from the movie’s secular world. Despite its faults, MOVIEGUIDE® notes that NIM’S ISLAND is wonderful entertainment for all ages.

(Ro, H, BB, Cap, E, L, V) Light Romantic worldview with a humanist non-supernatural perspective stressing self-reliance, as well as some strong moral elements such as loyalty, courage, heroism, love for one another, keeping one’s word, and an appreciation for private property, and some light environmentalist elements, such as very sentient pelican, lizard and sea lion; two light profanities; action violence but not much blood includes father gets caught in an ocean squall, lead woman gets caught in ocean squall, little girl falls down outside of volcano, and flashbacks to fictional hero fighting villains by the score; no sexual activity; no nudity but men and women on bathing suits on cruise ships in the distance; no alcohol; no smoking; and, nothing else objectionable.

NIM’S ISLAND is a terrific, well-made, emotional adventure comedy filled with jeopardy and danger. The movie uses an interesting approach to storytelling. Some of it is voiceover, some of it occurs in flashback, some of it is sort of a bird’s eye view of three different journeys taking place, some of it is cartoon, some of it is painting, and so forth.

The movie opens with a picture of a beautiful oceanographer. The woman’s daughter, Nim, tells how this beautiful woman in the still picture went to sea to discover what was in a whale’s stomach, but was threatened by a buccaneer ship and then got swallowed by the whale. This sequence goes from the still photograph to childlike drawings to very stylized animation.

Nim says her father took her sailing around the world three times to find her mother. They finally discovered an uncharted volcanic island in the middle of the Pacific. They have turned the island into an island paradise.

While Jack is a marine scientist only interested in micro-organisms, Nim plays with a sea lion, a pelican and Fred the lizard. Her animal friends seem very intelligent and prove their intelligence throughout the movie.

Nim loves reading Alex Rover adventure stories. Alex is an Indiana Jones character who gets into and out of impossible adventures. While she is reading about him, he gets loose from Arab bandits. While still bound and tied, he sends them flying in all directions, including over her bed.

Cut to San Francisco where Alexandra Rover, played by Jodie Foster, is trying to finish the next Alex Rover novel. Alex is about to be thrown into a volcano, but this time Alexandra can’t figure out how to get him out of the problem. Her editor is after her, and even Alex appears to her constantly, asking her to finish the novel. Alexandra is severely agoraphobic, the opposite of her adventure persona. She even is afraid of going out of the house to get her own mail.

Alexandra reads a scientific article that Jack wrote about their volcanic island and emails Jack under her pen name Alex Rover. Nim is delighted and answers Alex.

Jack goes off in his sailboat to research a rare plankton phenomenon. Nim stays, and Alex asks her what the volcano is like. So, Nim climbs the volcano but falls down on the way down, badly cutting her leg. Jack does not return because of a squall that destroys his boat.

Alex figures out that Nim is just a young girl who is badly hurt. Nim, thinking she’s emailing the big adventurer, begs Alex to come to her. Alex has to overcome her agoraphobia and impossible odds to come to this remote island. Jack has to survive the sharks and the squalls to get back to Nim. Nim has to survive her cut, and an Australian cruise ship named The Buccaneer that wants to take over the island. She fights for her life and her home.

NIM’S ISLAND is that type of fanciful adventure yarn that will keep you on the edge of your seat and make you laugh and cry. It is, in fact, a coming of age story telling how a young child learns how to deal with an unknown world. The fanciful filmmaking works. There’s only one scene that seems a little silly, but it quickly passes. The acting is also superb. If this was a serious adult movie, Jodie Foster would be considered for an Academy Award, as would Abigail Breslin, who plays Nim. And, the animals deserve awards too.

The movie teaches self-reliance, loyalty, keeping one’s word, never giving up, and love for one another, but also an environmentalist message that animals are people too. This message is not so convincing if you get bit by a lizard or bonked by a sea lion. Furthermore, except for two “Oh, My G*ds,” God is strangely absent from this movie. Jack, when he’s at the worst possible position, screams out not to God, but to himself that he will keep his word. Nim, when she is in extreme dire distress, tells her animal friends that she will solve the problem. These are almost Ayn Randian type characters, self-sufficient to a fault. The difficulty is that we expect others to and all of us need to ask for help when we are in dire circumstances. It seems unnatural to have a world so cut off from the supernatural, especially from God’s saving grace.