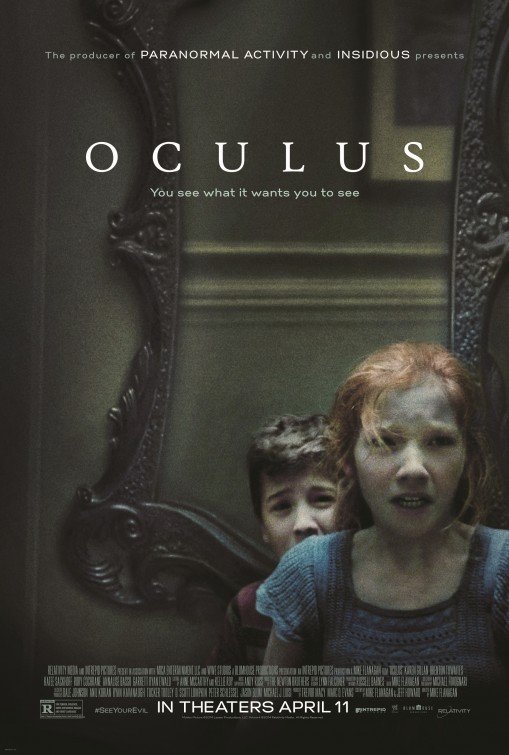 OCULUS is a scary horror movie about an evil mirror haunting a middle-class American family. A haunted mirror drives the father of two children mad enough to torture and murder their mother, forcing the little boy to kill the father. Years later, the sister figures out an elaborate way to destroy the haunted, demonic mirror while proving that her father and brother are innocent, but the mirror is more powerful than she imagines.

The creators behind OCULUS brilliantly exploit the classic horror movie formula, but their movie loses steam in the third act. This may be due to the fact that the mirror is so powerful, it can manipulate time and reality. Thus, no matter what the sister or brother try to do, the haunted mirror is able to counteract it. As a result, the protagonists become more and more ineffectual, and the movie starts losing its suspense. Worse, because the mirror is so powerful, the evil demonic powers in OCULUS are able to easily overcome the protagonists, causing more murder and misery. So, OCULUS has an abhorrent, unacceptable, uninspiring conclusion.

(OOO, B, LL, VVV, S, A, MM) Very strong occult worldview where demonic forces win out, plus some moral elements wherein protagonists want to defeat demonic forces; five obscenities, three strong profanities, and two light profanities; some strong and very strong bloody, scary violence includes characters shot and impaled, man accidentally fatally stabbed in the neck, woman goes mad and is chained up in bedroom by her mad husband, it’s implied woman’s been tortured and has had her teeth knocked out, fantasy scene with blood, where woman takes bite of an apple, but it turns out to be a lightbulb, ghosts with demonic eyes haunt people, fantasy gash in woman’s tummy, dogs are scared by haunted mirror and the demonic ghosts living in it, etc.; no implied or explicit sex, but young woman shown to be living and sleeping with her fiancé, and a beautiful woman who’s really an ugly ghost seems to be hugging a married man; alcohol use; no smoking or drugs; and, possessed people lie and say false things as well as do bad things, possessed parents driven insane repeatedly scare their two children.

OCULUS is a horror movie about an evil mirror haunting a middle-class American family. The movie cleverly employs some classic horror movie tropes, but the ending is a letdown. Also, the occult evil faced by the protagonists is much too powerful, so evil inevitably wins out in the end. By doing this, the filmmakers have not only offended a big portion of the moviegoing audience, but also diluted the power of their story’s suspense.

The movie opens with a young man, Timothy, finally being released from a mental institution after killing his father when he was young. His sister, Kaylie, believes Timothy had no choice but to kill their father, who had been driven mad by an old haunted mirror in their house. However, the humanist psychiatrists at the mental facility have convinced Timothy that Kaylie’s belief about a haunted mirror isn’t real. They’ve given him a completely naturalistic interpretation of everything that happened when his father tortured and murdered their mother, and Timothy shot his father.

Despite this, Kaylie reminds Timothy he promised her years ago he would help her destroy the mirror and kill the demonic ghost lurking within it. She has bought the mirror back and put it in their father’s office in their old house, where the tragic deaths occurred. To thwart the ghost inside the mirror and prove to the world that their father and Timothy are innocent, Kaylie has set up cameras all over the house. If things get bad, she has also rigged a heavy automatic device that will come down and shatter the mirror into a thousand pieces.

Of course, the best-laid plans often go astray, as the old Scottish poet once wrote. Timothy at first refuses to go along with Kaylie’s plan, but once inside the house, he’s magically, and horrifically, compelled to stay. The evil mirror, with its demonic spirits, continues its rampage with a vengeance.

Within the classic conventions of the horror movie, the characters are often faced with a potentially fearful situation where the “normal” order of things is disrupted. This disruption can be graphed by “binary oppositions,” i.e., Life/Death, Human/Animal, and Civilization/Jungle. For example, Dracula the vampire upsets the boundary between Life and Death because he’s both alive and dead, the Wolf Man confuses the line between the Human and the Animal because he’s both a wolf and a man, and King Kong upsets the boundary between Civilization and the Jungle when he escapes his chains to wreck havoc on New York City and its denizens. Faced with this chaos, the characters in a horror movie try to restore order by repairing the balance, frequently by killing or banishing the monster responsible for the disruption. Once the chaotic monster is destroyed or banished, the characters are then able to begin their lives anew.

The filmmakers brilliantly exploit this disruption of Past and Present, and Reality and Fantasy. It provides almost all of the movie’s most intelligent spooky atmospherics and frightful scares.

That said, the movie seems to fall apart in the third act, which becomes rather predictable. Part, or much, of the problem stems from the increasingly apparent fact that the haunted mirror is just too powerful. After all, a mirror that can manipulate both time (Past/Present) and existence (Reality/Fantasy) is a pretty powerful mirror indeed. Thus, no matter what Kaylie or Timothy try to do, the haunted mirror is able to counteract it. As a result, the protagonists become more and more ineffectual, and the movie starts losing its suspense. Also, it’s pretty hard to sympathize with people who run toward serious danger in a vain or conceited attempt to overcome it.

Eventually, OCULUS makes it clear that the forces Kaylie and Timothy try to overcome are demonic. For example, at one point, the father says that, when he looks in the mirror, “I’ve met my demons, and they are many. I’ve met the Devil, and he is me.”

Because the mirror is so powerful, the evil demonic powers living in it are able to easily overcome the protagonists, causing more murder and misery. This means that OCULUS has an abhorrent, unacceptable, uninspiring conclusion. Therefore, media-wise viewers should want to stay away from OCULUS and its scary occultism.

Ultimately, OCULUS leaves the classic horror movie formula behind. In doing so, it neither satisfies nor inspires. Such dark horror movies seem to have increased in our modern world, probably because so many people have forgotten or forsaken God, including His Law and His Salvation, not to mention His Holy Word, the Bible.