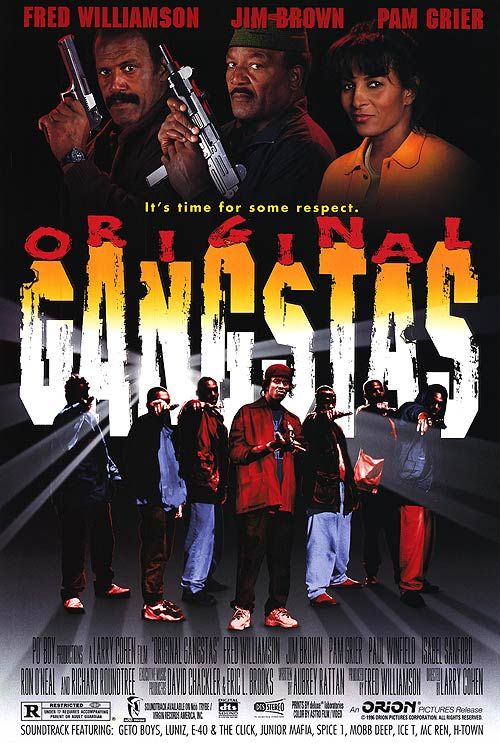 Despite a strong anti-gang approach, ORIGINAL GANGSTAS loses any positive moral attributes in its overriding plot of vengeance and violence. After a teenager is murdered and his father is shot by gang members, John Bookman returns to his hometown to take back the neighborhood from gangs with the help of some former gang members and neighborhood residents.

ORIGINAL GANGSTAS opens with teenagers pulling a basketball hustle against members of a gang. When the gang members find out they were hustled, they seek revenge through a drive-by shooting. The gang’s violence brings two of the original Rebels to town: John Bookman, played by Fred Williamson, the father of the slain teenager, and Jack Trevor, played by Jim Brown, boxng coach and the biological father of the murdered teenager. A mediator between the gangs and the community, the Rev. Marshall Dorsey, “sells out” the neighborhood in his desire to keep the gang members content. In frustration, Bookman leads some of the original Rebels, including Laurie Thompson, played by Pam Grier, the mother of the murdered teenager, into using guns, fraud and even murder to fight the gangs.

The movie is reminiscent of the 1970’s “blaxploitation” movies aimed at African-American audiences, and the music evokes memories of SUPERFLY. The movie does provide some positive messages about life in urban neighborhoods: gang members are portrayed as negative characters, and mediation through the church is explored. These positive attributes, however, cannot overcome the overriding message of revenge through violent means. The movie offers no moral solution to gang violence.