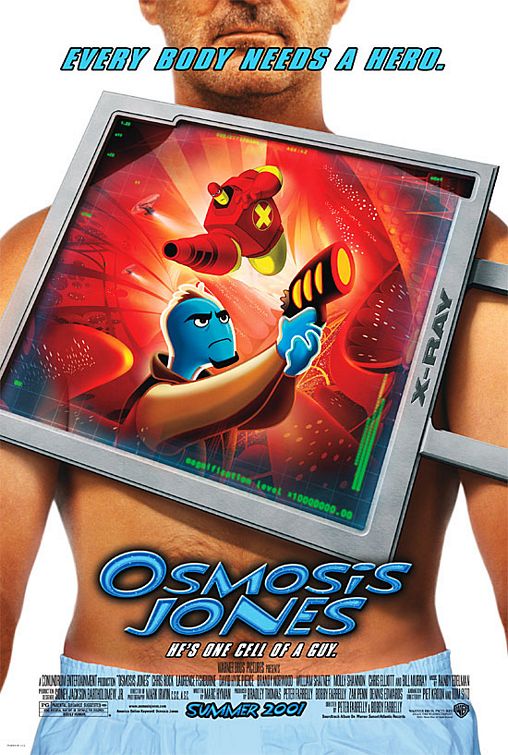 In OSMOSIS JONES, Bill Murray plays Frank, an overweight, slobbish single parent working as a zoo keeper while taking care of his little preteen daughter. Frank gets infected by a deadly virus. Inside Frank’s body, Osmosis Jones, an animated white blood cell voiced by comedian Chris Rock, tries to stop the virus, with help from a pompous 12 hour cold tablet, voiced by David Hyde Pierce of TV’s FRASIER. Frank’s eating habits hinder their efforts, as does the pompous mayor inside Frank’s brain, who’s voiced by William Shatner of STAR TREK and T.J. HOOKER.

The animated world in OSMOSIS JONES is not as disgusting as one might expect. The animated sequences, in fact, are actually well-produced and often entertaining. The poorly-directed, live action sequences, however, contain scenes of strong gross-out humor. These scenes are directed by the juvenile-minded Peter and Bobby Farrelly, who did the R-rated THERE’S SOMETHING ABOUT MARY. Thus, despite a clever idea and some colorful animation, families should steer clear of OSMOSIS JONES, which deserves an extreme caution, especially when compared to something like SHREK, which also had some body humor, though not on the same level as this

The new PG-rated family movie, OSMOSIS JONES, presents a mixed bag for parents, families and children. Although it contains a well-produced, entertaining animated adventure, it also has live action scenes with some very strong gross-out comedy that should have earned it a PG-13 rating.

Despite the problems with the live-action sequences, Bill Murray looks perfect in his role as Frank, the dirtiest, grubbiest slob in recent movie history. Frank is an overweight single parent working as a zoo keeper while taking care of his little preteen daughter Shane, played by Elena Franklin. Shane already has lost her mother to poor eating habits and is deeply troubled because her dad seems to be steadily following in her steps. In fact, Frank’s idea of good hygiene is so twisted that he stuffs a hardboiled egg into his mouth which had been slobbered by a monkey and fallen on the extra filthy floor of the monkey’s outdoor cage. Frank excuses his behavior by telling Shane that it’s okay because he followed “The 10 Second Rule,” which means that “As long as you pick up something from the ground within 10 seconds it cannot harm you.” That’s where Frank’s problems actually begin, because, unknown to him, a very nasty virus had just landed on that dirty egg and is about to seriously threaten Frank’s very own life.

The movie follows the partially masticated egg through Frank’s mouth and into his body, where the action deftly switches into a colorful cartoon world replete with germs, bacteria, dust spores, and bodily fluids . . .yuck. Of course, the initial reaction is to squirm and look away from the screen, but to the animation directors’ credit, this cartoon world becomes an exciting, fascinating new dimension to watch as the movie reveals a world replete with highways, airports, a police department operated by white cell policemen who protect the system, and a Mayor who runs the entire body’s functions from his office in the cerebellum.

The title character, Osmosis Jones, played by comedian Chris Rock, is a white cell detective who has fallen on hard times after causing Frank to violently throw up all over Shane’s school teacher, Mrs. Boyd (Molly Shannon), to protect him from a rotten oyster he had just eaten. Jones now finds himself delegated to remote regions of the body on routine patrols. Officer Jones does not know it yet, but he will soon become the most important white cell in Frank’s body as he gets on the trail of “Thrax”(Laurence Fishbourne), the deadly virus that has invaded “the City of Frank.” Jones also faces roadblocks at every turn, even from the calculating Mayor (William Shatner) who is perfectly comfortable with Frank’s unhealthy lifestyle. “A fat Frank is a happy Frank,” the Mayor tells his constituents.

At first, the virus takes the form of a mild sore throat, so Frank swallows a Drixenol capsule, played by David Hyde Pierce of TV’s FRASIER with deadpan charm as a naïve, duty bound, but potent, 12 hour time release medication. Upon his arrival, Drix soon becomes Osmosis’ loyal and colorful sidekick in their quest to find and destroy the virus before it’s too late.

Although the animated world in OSMOSIS JONES turns out to be not as disgusting as one might expect, it does contain some images of waste material in Frank’s body and a scene where it is implied that one animated character exits Frank’s body because of flatulence. It is, however, the poorly-directed, live action sequences in this movie that contain several very strong gross-out scenes. The two worst ones are a scene involving vomiting and a scene with a festering pimple on Bill Murray’s forehead. Of course, another animated movie earlier this year, SHREK, also had about three scenes regarding some bodily humor, but those scenes in no way match the strong gross content of the gross live action scenes in OSMOSIS JONES. These live action scenes in OSMOSIS JONES are directed by the Farrelly Brothers, Peter and Bobby, who did the awful THERE’S SOMETHING ABOUT MARY and ME, MYSELF & IRENE. Apparently, they just couldn’t let well enough alone and had to add their stupid juvenile touch to what could have been a much better family movie.

Thus, mostly because of these live action sequences, MOVIEGUIDE® has to give an extreme caution to OSMOSIS JONES. The rest of the movie, however, has some moral elements in it. For example, Frank eventually redeems his bad behavior, and Osmosis Jones and his buddy Drix work desperately to stop the villainous virus infecting Frank’s body. Please consult our content section for other material that might be inappropriate.

There are no great performances in OSMOSIS JONES. Bill Murray as a veteran actor is both loveable and disgusting at the same time. Molly Shannon, from SATURDAY NIGHT LIVE TV fame, and Bill Elliott as Frank’s beer guzzling dimwitted buddy are both competent and appropriate. Elena Franklin as Shane does not show special acting skills either, but is also likable and warm in her role as the sober young girl who loves her dad and wants him to change his self destructive ways. Viewers are also treated to the recognizable voices of William Shatner, Lawrence Fishbourne, Ron Howard, and music star Brandy Norwood.

It is the idea that really steals the show, however, by bringing to the screen a really innovative concept by writer Marc Hyman whose own creative juices must have been flowing feverishly as he applied life from without to life from within, and by the dazzling colors and imagery representing Frank’s internal body organs and functioning. In a way, audiences have seen it all before in precursors like FANTASTIC VOYAGE and a hundred other cop movies, but Hyman, together with animators Piet Kroon and Tom Sito, cleverly borrows a little bit from each to come up with OSMOSIS JONES.