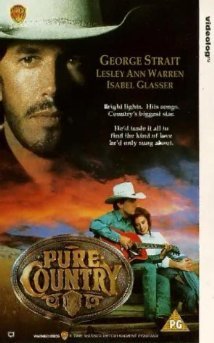 PURE COUNTRY is the story of Dusty Chandler (George Strait), a popular country music star who "takes a walk" from his glittery Vegas-style stage act and controlling manager and hitches a ride to the heartland. This warm romantic drama upholds honesty and integrity, but contains some mildly offensive language, one scene of drunkenness, an implied sexual relationship, and 2 fist fights.

(B, L, VV, A/D, S, H) The message that integrity and honesty are more important than fame and fortune is marred by 4 obscenities & 6 profanities; fist fights; alcohol consumption but only 1 scene of drunkenness (most unusual for a movie about musicians); implied sexual relationship; and, humanistic nihilism.

PURE COUNTRY is the story of Dusty Chandler (George Strait), a popular country music star who becomes disgusted with his glittery Vegas-style stage act and his manager LuLu’s tight-fisted artistic control. Dusty sees that he is losing his identity to LuLu’s ambition and his audiences’ fantasies, so he hitches a ride to the heartland, where Dusty visits his spry grandma and the old juke-joint where he used to play. In a desperate measure to avoid cancelling the tour, LuLu puts roadie Buddy on stage to impersonate Dusty. Drummer Earl leaves to search for Dusty. Earl is followed by LuLu and some of the crew, who hope to bring Dusty back.

For all its well-worn dramatic turns, PURE COUNTRY is good news since conspicuously missing are the excessive drinking, drug use, profanity, sex, suggestive dancing, and rebellion that mars most music movies. However, Dusty’s drunken brawl and LuLu’s affair will turn off many people. Curiously, the film contains no references to Christianity or the church. Over all, though, PURE COUNTRY is a most pleasant surprise. Its message of the triumph of honesty and sincerity, coupled with its avoidance of many negative elements common to “musician” movies, makes for enjoyable entertainment.