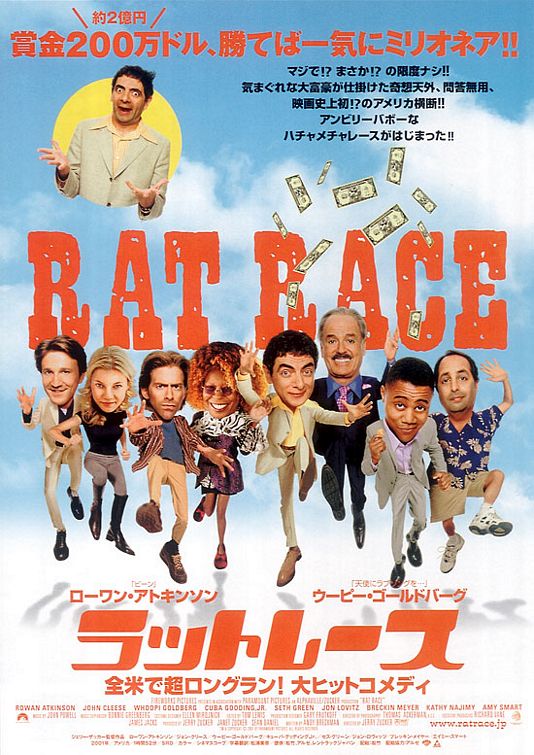 Nearly all of the characters in RAT RACE lie, cheat, steal, and do other immoral things to get there first for the money. Most of the time, however, these greedy acts land them in even more trouble. Also, the story ends on a strong moral note, in a slightly redemptive fashion. More troubling, perhaps, is some really inappropriate foul language and some crude humor, especially three adult-oriented sexual jokes. There is also some slight ethnic humor, jokes about Wayne Knight carrying a heart for an emergency organ transplant and humor regarding a group of mentally handicapped people on an outing.

(B, Pa, Ho, C, LLL, VV, S, N, A, D, MM) Moral worldview exposing the frailties & sins of human beings with a moral ending in the movie’s very last scene which teaches, “It is much better to give than to receive,” but movie contains some crude humor, especially three sexual jokes, one of which is an oblique reference to pedophilia, another involves a prostitute & a third involves a reference to the title of a pornographic video called “Afro Whores,” plus effeminate man dresses up as Lucille Ball in a busload of women dressed likewise for an I LOVE LUCY convention & person says God bless you & people are ironically compared to “the 12 apostles” when they finally do a good deed; 22 obscenities, 1 strong profanity/blasphemy & 3 mild exclamatory profanities; lots of comic violence such as pratfalls, getting entangled in machinery, vehicle crashes, fighting, perilous hot-air balloon ride involving a cow, man gets an electrical shock, & mishandling a heart being shipped for an organ transplant; some sexual references, including cross-dressing character; man shows off his skin ring on his naked breast & woman does likewise, but movie only shows an obscured side view of her chest; alcohol use; smoking; and, cheating, lying, deceit, stealing, gambling, ethnic humor, etc., done in a comic vein, plus brief humor about a group of mentally handicapped people & an encounter with some Nazi skinheads, which leads to a series of jokes about Adolph Hitler, Nazi Germany & World War II.

With the new movie RAT RACE, Paramount Studios brings back the ensemble comedy genre of such 1960s movies like IT’S A MAD, MAD, MAD, MAD WORLD. Although it’s strongly reminiscent of those classic G-rated movies, the filmmakers have still inserted some contemporary racy PG-13 moments, modern ethnic humor and foul language that takes away from the family friendliness of their product. They’ve done this even though box office statistics show that G and PG movies with a more old-fashioned spirit can often be blockbusters. That does not mean, however, that RAT RACE doesn’t rely mostly on the classic comedy style developed by those 1960s movies. It does, and it has a morally uplifting ending that those other movies sometimes did not have.

An eccentric Las Vegas tycoon, Donald Sinclair, played by English funnyman John Cleese, puts six specially minted gold coins in six different slot machines in his casino. The tycoon has concocted a human “rat race” for the six random people who win the coins. Sinclair needs to keep his wealthy high rollers happy. So, he lets them bet on which one of the people will win the $2 million that his associate Mr. Grisham has stashed in a duffel bag 700 miles away in a locker located in Silver City, New Mexico.

A large, diverse cast of comedic actors plays the six contestants and the relatives, friends and acquaintances who travel with some of them. For example, Jon Lovitz plays a family man who drags his wife and two kids on the frantic chase for the money. Whoopi Goldberg is a woman meeting the daughter she gave away for adoption twentysomething years ago. Meanwhile, Cuba Gooding, Jr., plays a professional football referee who steals the uniform of a bus driver taking a bunch of women dressed up like Lucille Ball for an I LOVE LUCY convention. Breckin Meyer and Amy Smart are an attorney and a female helicopter pilot who get sidetracked by her cheating boyfriend (Dean Cain). Finally, Rowan Atkinson, who plays Mr. Bean in TV and movies, is an Italian tourist who hitches a ride with Wayne Knight of TV’s SEINFELD and THIRD ROCK FROM THE SUN, who’s rushing a heart to a hospital for an organ transplant.

Among some of the funniest situations these people and the other cast members get themselves into include encounters with an airport radar dish, a cow, a hot-air balloon, a lady selling squirrels to people by the roadside, and a group of Nazi skinheads who own some interesting artifacts from World War II. Furthermore, lest we forget, if you know your I LOVE LUCY reruns, you can well imagine the crying and wailing that happen on the bus among the Lucille Ball fans when Cuba Gooding’s character manages to foul up the trip to the I LOVE LUCY convention.

Regrettably, however, there are a fair number of mostly mild obscenities and one strong profanity in RAT RACE. There is also some crude humor. Some of that humor is lightweight toilet humor or ethnic comedy, but some of it is sexual. For example, when the attorney tries to check out of his hotel room before he gets his coin, he discovers that his bachelor party friends had rented a porn tape from the hotel – several times. The title of the tape has something to do with prostitutes who happen to be African Americans, which embarrasses the straitlaced white attorney further because a black family is standing in line behind him at the reception desk. The attorney repeatedly insists that he did not order the tape, but the desk clerk keeps repeating the title of the tape for everyone to hear. Also, there is an oblique reference to pedophilia when the Italian tourist loses his key to the money locker to a precocious infant. When the tourist tries to get the key back, the child’s parents misunderstand what he’s doing, which gets him kicked off a train.

In addition, nearly all of the characters in this frantic comedy lie, cheat, steal, and do other immoral things to get there first for the money. Most of the time, however, these greedy acts land them in even more trouble. Finally, the story ends on a strong moral note. In fact, in the movie’s redemptive ending, somebody says, “God bless you,” and somebody compares the surviving contestants in the “rat race” to the 12 Apostles. Also, the eccentric, devious tycoon who started it all appropriately gets his comeuppance. Of course, the tycoon probably is the Judas figure in this little morality play.

The ultimate message of RAT RACE seems to be that it is much better to give than to receive. That message is good, even though some of the humor in this movie is not. Apparently, director Jerry Zucker has tried to combine the morality of his previous movie FIRST KNIGHT (a MOVIEGUIDE® Award winner) with the outrageous comedy of the first movie he directed, the trend-setting AIRPLANE. As someone recently pointed out on TV, AIRPLANE is itself reminiscent of another icon from the 1960s, the great TV spy spoof GET SMART.