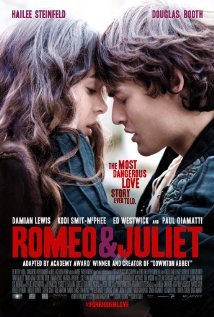 ROMEO AND JULIET is a new version of Shakespeare’s beloved play about two young “star-crossed” lovers who find themselves in an impossible situation. It’s time for Juliet to marry. Her parents throw their daughter a fancy ball, where she meets Romeo. Romeo and Juliet come from rival families, so their love is forbidden. However, they continue to fall in love and secretly marry, but tension builds between their families. This leads to tragedy.

ROMEO AND JULIET is a beautiful rendition of the classic play by Shakespeare. With wonderful performances, the play is brought to life. The movie includes incredible sets and costumes, a must for any rendition of Shakespeare. ROMEO AND JULIET has a Romantic worldview, dependent on lust. The two lovers seem to act on impulse and feeling, falling “in love” after glimpses of each other. They also take extremes to be with each other.

Though this is the case, Romeo and Juliet get married within a church and take counsel from a priest. ROMEO AND JULIET also shows that revenge can completely destroy a family, to the point of death.

(RoRo, CC, BB, L, VV, S, A, MM) Romantic worldview, following the passion of the moment, with Christian, moral elements of marriage in the church, counsel from a priest, signs of the cross, crucifix, prayer, images of Mary and baby Jesus, ‘God bless you’ is said, and the bad consequences of revenge are shown; one profanity, one obscenity; sword fighting, two men killed in sword fight, main character takes poison, other stabs herself, man slaps other man; kissing, implied sex inside of marriage; no nudity; drinking; no smoking nor drug use; and, revenge.

Juliet Capulet is coming to an age she must marry. Her parents throw a ball to introduce her to the man she’s destined to marry, Paris. Instead, Juliet takes interest in Romeo. Instantly, Romeo and Juliet fall in love without even knowing each other’s name.

When Juliet learns of Romeo’s name, she learns that he’s a Montague. The Montagues and the Capulets have been rivals for years, to the point of even killing one another. Knowing the risk, the two see each other secretly at night, where Romeo declares his love for Juliet. With the help of Romeo’s priest, Friar Lawrence, and Juliet’s nurse, the two are able to exchange messages and meet.

Falling madly in love, Romeo decides to marry Juliet. All the while the two families are fighting, specifically Juliet’s cousin, Tybalt, who knows about Romeo’s interest in Juliet. Tybalt is an incredible swordsmen and kills one of Romeo’s greatest friends, Mercutio.

Completely overcome with revenge, Romeo kills Tybalt. As punishment the Prince exiles Romeo from Verona. Knowing that he will be away from Juliet, Romeo is completely distraught, but Friar Lawrence thinks of a scheme to get them together.

ROMEO AND JULIET is a beautiful rendition of the classic play by Shakespeare. With wonderful performances, ROMEO AND JULIET is brought brilliantly to life. The tale that we all know so well is beautifully depicted, with incredible sets and costumes. The language is slightly modernized for this version, but the movie retains the essence of the original language.

ROMEO AND JULIET has a romantic worldview, dependent on lust. The two lovers seem to act on impulse and feeling, falling “in love” after mere glimpses of each other, and taking extremes to be with each other. Though this is the case, Romeo and Juliet get married within a church and take counsel from the priest.

ROMEO AND JULIET also shows that revenge can completely destroy a family and brings about death. Finally, Shakespeare’s story shows that hasty, impetuous decisions can have disastrous consequences.