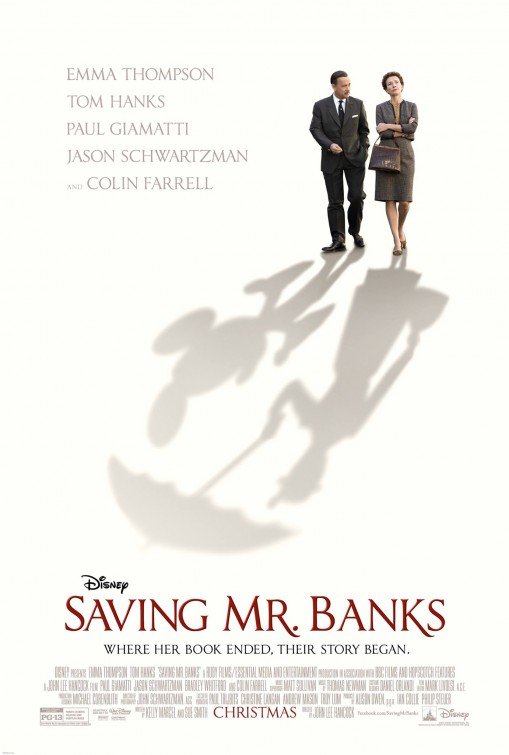 In SAVING MR. BANKS, Walt Disney wants the movie rights to the Mary Poppins children’s books from the author, Mrs. P.L. Travers. Travers has kept the movie rights for the novel for 20 years from Walt, but her funds are running low. Though hesitant, Travers decides to fly to Los Angeles to start selling the rights. Walt has made a promise to his children he will make Mary Poppins into a movie. He’s willing to give Mrs. Travers whatever she requests, but the two have very different views on how to make the movie.

SAVING MR. BANKS has a brilliant script, showing the characters depth and arch. Emma Thompson and Paul Giamatti give strong performances. However, SAVING MR. BANKS has a mixed worldview with some New Age, Buddhist, and occult content, but also some overt Christian content stated by Walt Disney’s character. The movie shows Mrs. Travers interest in Buddhism, bringing a Buddhist icon with her everywhere she goes. At the same time, Walt is always stating Christian themes of salvation, redemption, hope, love, and forgiveness. SAVING MR. BANKS warrants strong caution.

(PaPa, FRFR, C, BB, L, S, AA, D, MM) Strong mixed pagan worldview with some Buddhist and New Age content such as a Buddhist icon, a mystical guru’s book is shown on a desk, there’s discussion of life being an illusion, girl meditates to be a hen laying an egg after being told she can be whatever she dreams, father tells story of a witch turning a man into a horse, but also with some Christian, moral content, such as mentions of the Saints and Apostles, and themes of forgiveness, love, hope, sacrifice, giving, and honesty; two obscenities and four profanities; no violence man coughs up blood; no sex, just a kiss between a married couple; no nudity; alcoholism is addressed in the movie; smoking, but no drug use; and, there’s the portrayal of a dysfunctional family where the mother almost commits suicide and the father is an alcoholic.

SAVING MR. BANKS tells the true life story of Walt Disney trying against all hope to convince the author, P.L. Travers, to give him the movie rights to her popular Mary Poppins books for children. SAVING MR. BANKS is extremely poignant and even heartrending, but has a mixed worldview with some New Age and Buddhist content as well as much Christian dialogue.

P.L. Travers is the writer of the beloved Marty Poppins books. She has kept the rights from Walt Disney for 20 years, but her funds are running low. Though she’s very hesitant, Mrs. Travers decides to get on the plane and go to Los Angeles to start the process of selling the rights.

Mrs. Travers is very specific about how she wants Mary to be portrayed, and she will not let Walt drift from that image. Once arriving, Mrs. Travers is greeted by Ralph, a kind limo driver who constantly states optimistic comments that Mrs. Travers immediately refutes.

When Mrs. Travers arrives at her hotel, she’s overwhelmed by Disney Paraphernalia, such as giant stuffed Disney characters like Mickey Mouse, which she stuffs away in the closet. Finally, Walt Disney warmly welcomes Mrs. Travers to his office, telling her he promised his children he would get the rights and make the movie for them. He’s willing to give Mrs. Travers whatever she wants to make a Mary Poppins movie.

Throughout the whole experience with Walt, Mrs. Travers experiences flashbacks to her youth in Australia with her father, whom she loved dearly. At such a young age, Travers didn’t see the harm of her father’s excessive drinking. Her father tells her that this life is an illusion, and she can be whatever she dreams. In reality, Mrs. Traver’s father was living a lie and destroying his life from alcoholism.

Finally, when Mrs. Travers shows some interest in fully giving Walt the rights, something goes wrong. Walt has to truly show his kind nature in order to work with Mrs. Travers.

SAVING MR. BANKS has a brilliant script, in which the story truly unfolds, showing the characters’ depth and arc. The music and cinematography are also executed well. Emma Thompson and Paul Giamatti do extremely strong performances. Overall, the movie is very well made, and, though there are flashbacks, they flow perfectly together to create depth.

Overall, SAVING MR. BANKS has a mixed worldview with some New Age and Buddhist content, but also some Christian content from Walt Disney’s character. The movie shows Mrs. Travers’ interest in New Age nominalism and Buddhism, with a copy of one of the amoral, mystical guru George Gurdjieff’s books on her desk and a Buddhist icon she takes with her everywhere she goes. Flashbacks of her childhood show that her father too had an interest in such nominalism. He says life is an illusion, and, if she meditates, she can be whatever and whoever she would like to be. However, her father’s lack of a real worldview causes him to die from self-deception manifested in alcohol abuse. Also, it is suggested that history is cyclical, and the dead will always be one with the universe, much like Buddhism.

In real life, P.L. Travers was a pen name for Helen Lyndon Goff. Goff was caught up in the occultism of her age and followed Gurdjieff, studied Zen Buddhism, lived with the Hopi Indians, and seems to have had bisexual affairs. Goff felt that the Walt Disney Company’s Mary Poppins was too joyous, frivolous, and happy. Her Mary Poppins was darker, more serious, more strict, and even pompous, with magical powers resembling a form of sorcery or witchcraft.

Considering how susceptible some children are to this message, parents need to be very cautious about both movies, MARY POPPINS and SAVING MR. BANKS, although too many parents are too naïve about the occult. MOVIEGUIDE® Publisher Dr. Ted Baehr’s parents were Hollywood and Broadway stars. His father Robert Allen aka Bob “Tex” Allen aka Ted Baehr won the box office award in 1936. Both parents were interested in Gurdjieff, spiritualist Madame Blavatsky, and other occult leaders. Thus, the occult was a very real and often very destructive force. Even Dr. Baehr’s early academic life at Dartmouth, Cambridge, and so forth was influenced by these false religious ideas and streams of thought. However, Jesus Christ set Dr. Baehr free from occult, left-wing, and other bondage in February, 1975.

It should be noted, however, that in SAVING MR. BANKS, Walt Disney’s character is always stating Christian themes of salvation, redemption, hope, love, and forgiveness. These are the themes that really drive the movie’s character arcs and transformations. These are the themes that rescue SAVING MR. BANKS, Walt, and Mrs. Travers.