"An Issue of Destiny" 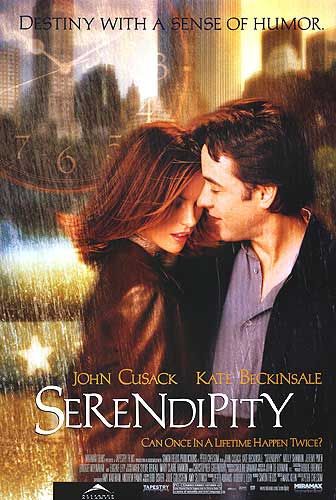 SERENDIPITY stars John Cusack of HIGH FIDELITY and Kate Beckinsale of PEARL HARBOR as two people who accidentally meet during the Christmas shopping rush in New York City. Cusack’s character Jonathan really hits it off with Beckinsale’s Sara, even though they are both involved with other people. Sara is into a New Age mystical Fate. If we’re meant to be together, Sara tells Jonathan, he’ll be able to find her address in a book she’s reading that she intends to sell back to a used bookstore. Years later, they decide to search for one another before they both get married to other people.

Although there are a couple important references to God, SERENDIPITY places the idea of Fate and Destiny squarely in a pagan context. This, in addition to some foul language and an immoral view regarding premarital relations, will offend family audiences who take their faith in God seriously. The acting, script and direction are fine and funny enough, however, to earn a degree of probable popularity for SERENDIPITY. This movie isn’t a classic, but many people may be attracted to this kind of story, especially in these tragic times in which we live.

(PaPa, C, Ho, LL, V, S, NN, A, D, M) Solid fatalistic pagan worldview (including a few brief references & jokes to New Age & living together before marriage is seen as okay), but there is also dialogue about the idea of a “Master Plan” & movie has some Christian references, including one point where heroine makes a plea to God & her “prayer” appears to be answered; homosexual joke & reference; about 12 obscenities & 9 profanities, including 3 strong profanities; mild slapstick violence such as golf ball hits woman on head; hero comes upon a couple taking off their clothes in preparation for fornication plus implied cohabitation; partial nudity from behind in a sexual context; alcohol use; smoking; and, some miscellaneous problems or immorality, such as “Fate” appears to bring people together & a metaphor about love being “in the stars.”

SERENDIPITY is not a classic romantic comedy like SLEEPLESS IN SEATTLE or IT HAPPENED ONE NIGHT, but it probably will be a reasonably popular one. It is a likeable, nicely acted romantic comedy that, however, has significant worldview problems. It also contains some strong profanities and a crude, gratuitous implied sex scene, about two-thirds of the way through the story, that’s played for laughs. These bad elements in the story are not done in a malicious way, but they will nevertheless send a wrong message to many people. This is especially true of the movie’s fatalistic, pagan worldview.

SERENDIPITY stars John Cusack of HIGH FIDELITY and Kate Beckinsale of PEARL HARBOR as two people who accidentally meet during the Christmas shopping rush in New York City. Cusack’s character Jonathan really hits it off with Beckinsale’s Sara, even though they are both romantically involved with other people. Sara, however, is into a New Age mystical philosophy regarding Fate. If we’re meant to be together, Sara tells Jonathan, he’ll be able to find her address in a book she’s reading that she intends to sell back to a used bookstore the next day somewhere.

Several years later, Jonathan has still been unable to find the book, and now both he and Sara are engaged to be married to other people. They both feel drawn, however, to make one last stab at finding one another. A funny, ironic series of coincidences and missed opportunities leaves them wondering, until the very last minute.

SERENDIPITY explores the idea of Fate and Destiny in an entertaining, often funny way. At one point, someone talks about whether there is a Master Plan for one’s life. A Master Plan implies the idea of a Master Plan Maker, or Creator God. Furthermore, at another crucial moment, Sara asks God to help her effort to be with Jonathan, and her prayer appears to work. Other than these two brief moments, however, SERENDIPITY places the idea of Fate and Destiny squarely in a non-religious, pagan context. It, therefore, represents a missed opportunity for Miramax Films, which could use another family-friendly blockbuster like this year’s SPY KIDS.

This isn’t the only bad thing about the movie’s worldview, regrettably. Although Sara’s friend mocks New Age beliefs, the idea of Fate and Destiny also seems to have some positive New Age connotations in SERENDIPITY, despite the references to God mentioned above. This adds to the ambiguous pagan nature of the overall piece.

Of course, God does indeed have a Plan for our lives. His Plan for us is to seek first His Kingdom, or rule, over our lives and let His justice and goodness reign over the whole world, through the Good News (or Gospel Message) of Jesus Christ. Once we do that, then all of our other concerns and worries will fall within God’s Divine Perspective, Sovereignty and Providence.

SERENDIPITY also contains three strong profanities misusing the Name of God, including that of Jesus. There is also a scene, about two-thirds through the story, where Jonathan accidentally happens upon a couple undressing one another in a bedroom. The scene ends crudely, though Jonathan’s actions during the scene are not salacious. It is clear in the other parts of the movie, however, that both Jonathan and Sara live together with their respective romantic partners.

Artistically speaking, John Cusack does his usual good job as the romantic hero. Kate Beckinsale is much more fetching in this movie than she was in PEARL HARBOR, though she wasn’t bad in that movie either. She demonstrates in SERENDIPITY, however, that she can play a variety of attractive leading roles. If she plays things right, she could become an English Julia Roberts. Finally, although the script is generally fine and the direction competent, the development of the story could use a more memorable collection of incidences building up to a more funny, more moving climax. Thus, MOVIEGUIDE® can only give SERENDIPITY three stars out of a possible four.