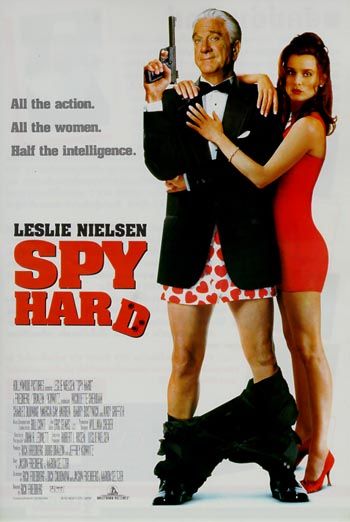 SPY HARD tells the familiar story of a secret agent (Leslie Nielsen) who must save the world from the desires of an evil dictator as well as save the beautiful girl in distress. Within this general outline, the main point of the film is to enact humorous parodies of as many action movies as possible. Regrettably, the writing does not compare with earlier Nielson parodies such as NAKED GUN.

SPY HARD seemed much funnier when I was younger, and it was called NAKED GUN. Here, Leslie Nielsen gets an opportunity to give his comedic impression on the spy movie. SPY HARD tells the familiar story of a secret agent who must save the world from an evil dictator as well as save the beautiful girl in distress. Actually, the point of the movie is to parody as many action films as possible. In the movie, Leslie Nielsen plays Dick Steele, a.k.a. “Agent WD-40”, who is pitted against the evil General Rancor (Andy Griffith). The General plans to launch a missile with Agent Barbara Dahl on top of it unless Agent WD-40 can stop him. To stop Rancor, Dick Steele enlists foreign Agent Veronica Ukrinsky, a.k.a. “Agent 3.14”. Will Agent WD-40 succeed? What do you think?

As in THE NAKED GUN series, Leslie Nielsen does an ample job playing the silly spy. Regrettably, the writing is not nearly as funny as the original NAKED GUN — often, it is contrived just to set up the next pratfall and parody. Also, there is no compelling love story to compare with the original NAKED GUN. Andy Griffith is well chosen as evil General Rancor. SPY HARD features cameos from a whole range of celebrities from Mr. T to Dr. Joyce Brothers, but once again it seems as though their only purpose is to spice up a rather lifeless picture.