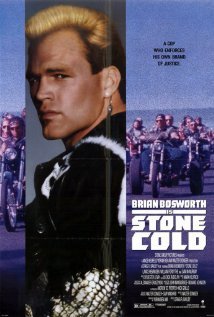 In STONE COLD, an ex-con biker teams up with the FBI to crack a Mafia-biker brotherhood that kills randomly and traffics in big drug deals. This movie, with its excessive violence, full-length nudity and foul language, was changed from NC-17 to R. Undoubtedly, some of the scenes were edited to warrant the change.

STONE COLD, the first major studio biker-action film to be released since EASY RIDER in 1969, gets its title from the places the hero has to go. As actor Brian Bosworth (of football fame) says: “My character, John Stone, has to become cold, calloused and very much like the biker world he has to infiltrate.”

Stone gains the biker’s acceptance (especially by the leader, Chains) when he beats their champion in a knock-down-drag-out fight. The gang’s toughness comes through in these “games” as they shoot beer cans out of each other’s hands and off the tops of heads in a variation of Russian roulette.

Shortly, Stone fills the police in on the biker’s intentions and also wins over Chains’ girl, Nancy. However, his new-found relationship with Nancy sours when she discovers he’s a cop. Thus, the night of the big heist, the bikers discover Stone’s real identity, thanks to Nancy, and they capture Stone which enables them to pull off the heist without interference.

When a gang member comes to trial a short time later, Chains gets into the courtroom disguised as a priest. Several other bikers get in as well. At the time of the hated D.A.’s verdict, they open fire and cut down numerous law officials.

At the same time, bikers outside the courthouse launch an all-out attack on the Mississippi supreme court with bikers charging the court house and a helicopter hovering overhead. This spectacular episode turns out to be a gigantic finale for this action-packed film and is complete with running gun fights in and through the court house.

STONE COLD, with its excessive violence (including close-up brutal killings), full-length nudity and foul language, was originally rated NC-17 and cut to an R. Considering all the sex and violence the question arises, Did they really cut it?

This film bears out Judges 17:6: “Every man did that which was right in his own eyes.” In short, since STONE COLD promotes rebellion, violence and sexual looseness, stay “cold” toward this movie.

Rating: R (STONE COLD was originally rated NC-17 and cut to an R. Considering all the sex and violence the question arises, Did they really cut it?)