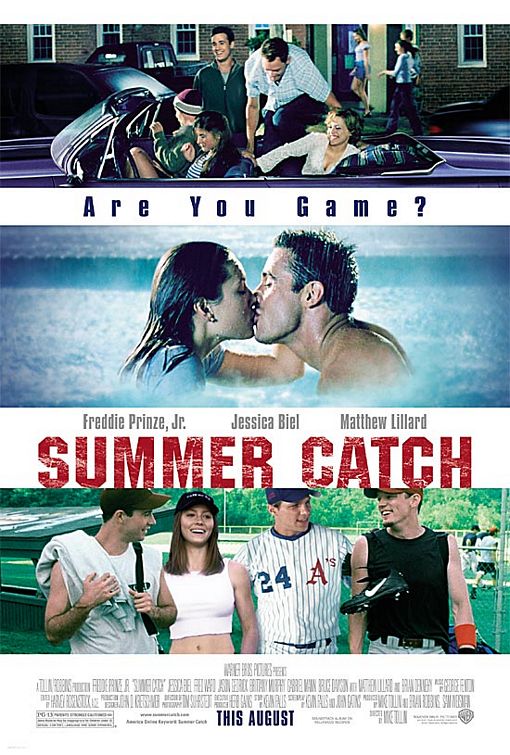 SUMMER CATCH stars Freddie Prinze, Jr., as Ryan Dunne, a working class college baseball player trying to make it into the Major Leagues in Cape Cod in an elite league that attracts pro scouts. A wealthy Vassar girl named Tenley Parish, played by Jessica Biel of TV’s 7TH HEAVEN, sees Ryan mowing her father’s lawn and sets out to make him her trophy of the summer. As friction builds between his loyal townie friends and his cocky teammates, college superstars jockeying for attention, and between Ryan and Tenley’s father, Ryan’s rivalry with hotshot pitcher Eric Van Leemer nears the boiling point. The sexually promiscuous local girls, however, are all too willing to cool off the boys when the ninth inning ends.

SUMMER CATCH is another one of the paint by numbers, Hollywood-follow-your-heart, fornication-will-help-you-achieve-your-goals, muddled movie. It combines a few sweet virtues with perverse and abhorrent sexual immorality, trying to make everyone happy. Mike Tollin's direction is serviceable, but he loses his actors frequently. Elevating SUMMER CATCH above the usual B-movie production values is some beautiful cinematography on the beguiling Americana of Cape Cod and lithe young bodies engaged in SUMMER CATCH.

(PaPa, B, Ab, LLL, V, SS, NN, AA, DD, MM) Pagan worldview with many immoral sexual elements & perversions, plus a few moral elements, such as a son reconciles with father & brother, young man gives up his big game to rescue a friend & young man rescues four people from fire, but woman successfully seduces Christian baseball player; 8 profanities & 45 obscenities as well as numerous double entendres for sex, several ribald sex gags, & borderline blasphemies; very light violence, such as scuffling between baseball players & burning building; constant sexual activity with no displayed fornication but plenty of before & after shots, girl pours beer held between legs into boy’s mouth in a sexual manner, older nymphomaniac attempts to seduce young baseball players by discussing her kinky sexual activities, young baseball player with very fat girl hops into bed with her, & much more; upper male nudity, women in revealing thongs, & women in wet T-shirts; lots of drinking; smoking & discussions of drug use; and, prudish Christian, fathers made to look bad when they want the best for their children, deception by children of parents, and possible PC slant against Southerners.

SUMMER CATCH is another one of the paint by numbers, Hollywood-follow-your-heart, sex-will-help-you-achieve-your-goals, muddled movie. It combines a few sweet virtues with abhorrent perversions, trying to make everyone happy.

According to the hero/narrator, Ryan Dunne (Freddie Prinze, Jr.) every year the hottest ball players descend on Cape Cod to play in the Cape’s elite baseball league so that they can possibly be picked up by a major league baseball team. Ryan is a lawn boy, which he notes is something less than a gardener, who has tried for years to make the Cape league. This year the coach (played by Brian Dennehy) gives Ryan a break. Ryan must go up against some tough players from around the country.

Ryan is up against a terrific pitcher named Eric Van Leemer. Eric knows that he is good because he was offered $2 million to be in a major league team, but wants more. Ryan gets his shot at pitching only because Eric is constantly getting himself into trouble off field, which the coach will not tolerate.

Ryan’s father wants Ryan to settle down to a normal life, but Dad secretly promotes Ryan’s baseball career to a Phillies scout. Ryan’s brother runs a bar and wants Ryan to mature so that he will get a shot at the big game. A wealthy Vassar girl named Tenley Parish sees Ryan mowing her big estate and sets out to make him her trophy of the summer.

Another player, the innocent Mickey “Domo” Dominguez, finds himself lodging with the town’s Mrs. Robinson. Night after night, he tries to resist her advances by reading his Bible surrounded by his crucifix and pictures of his family. Eventually, he is seduced by her perverse antics and his game improves dramatically. In fact, by the end of the movie, fornication has helped everyone improve their game, a big lie if there ever was one.

This paint-by-number movie is elevated above the usual B-movie by beautiful cinematography which focuses on the beguiling Americana of Cape Cod and the lithe young bodies engaged in SUMMER CATCH. What also brings it up a notch in terms of entertainment quality is the young characters frolicking together. This is not morally good, but it did capture the attention of the premiere screening audience. One of the players likes fat women and this gets many laughs as he preapres to bed his behemoth. The Mrs. Robinson type and Dede also received many laughs for their sexual antics. Even two local buffoons added to the action on the field. This is vulgar vaudeville brought to the screen in the tradition of AMERICAN PIE.

Mike Tollin’s direction is serviceable, but he loses his actors frequently. Often, they seem to be acting to someone off-camera. Consequently, the acting looks staged, which when coupled with the mundane dialogue and predictable crises, makes the movie dull in places.

The action on the field also detracts from the movie. The director doesn’t seem to know how to make the baseball games interesting. At one point, he cuts continually between the important baseball game and Freddie Prinze playing catch with Jessicia Biel; thus, enlivening the mediocre direction of the game with some shots of Jessica’s nubile body.

There are a limited number of positive moral moments in the movie as well. Ryan reconciles with his father and his brother, rescues four people from a fire, and saves his girlfriend from getting a job she doesn’t want.

SUMMER CATCH is much like its name, filled with double-entendres, and the premiere screening was filled with children. If, as Ravi Zacharias says “pluralism destroys reason,” then these children have been seriously confounded in their reasoning abilities by this portrait of sex solving life’s problems.