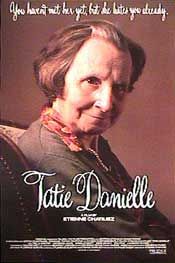 In this enjoyable French comedy, a malicious old woman comes to live with her nephew and his family in Paris, making life miserable for them, along with everyone else she meets. Recommended with extreme caution for some sexually explicit material and rough language

“You haven’t met her yet, but she hates you already.” So runs the teaser for this French comedy about a spiteful old lady whose only joy in life is taking the joy out of others’ lives.

We first meet Tatie Danielle at home somewhere in France, grumpily living out her final years with none but her faithful housekeeper, Odile, and her vicious attack dog to keep her company. From the start, we see that she is difficult, to put it mildly. Among other things, she deliberately tramples Odile’s flowers, sics her dog on the mailman and opens doors just so she can accuse Odile of carelessness.

Tired of her current situation, she gives Odile the dangerous job of cleaning the chandelier. Sure enough, Odile falls and breaks her neck, assuring Tatie a move to Paris where her only relatives live.

Moving in with her nephew Jean-Pierre and his kind but status conscious family, Tatie quickly drops the sweet-old-lady act she has given them for years and starts making life rough. She refuses her little grandnephew’s colored pictures, leaves him on the playground, kicks the family dog, and stuffs herself at dinner so she will throw up all over the place during the night.

Jean-Pierre and wife Catherine bend over backwards to please her, but when she ruins a dinner party by coming into the living room and turning the TV on as loud as it will go and then deliberately loses control of her bladder on the couch, the family decides they need a vacation. They hire a street-smart young woman named Sandrine to look after Tatie. Tatie soon discovers, however, that this girl won’t put up with her nonsense. When Sandrine hauls off and smacks her one, Tatie learns to behave herself, and the two become friends.

They clash once more, however, and Sandrine quits in a huff. Tatie proceeds to absolutely trash the house and set it on fire, landing herself in the hospital and her nephew in trouble with the law for “abandoning” her.

The film ends with Tatie escaping the hospital with the aid of Sandrine. The charges against Jean-Pierre are dropped, and everyone is glad to be rid of the geriatric sadist who nearly ruined their lives.

There are surprisingly few elements to offend in TATIE DANIELLE considering the usual promiscuous standards of European cinema. There is, however, some rough language and one scene in which Tatie barges in on Jean-Pierre and Catherine in bed together. While there is no nudity, the scene is graphic enough to make it unsuitable for children.

Having said that, there is much to recommend in TATIE DANIELLE. Though the film is paced much slower than the typical Hollywood comedy, the laughs are good and plenty, and the subtitles do not detract from them at all. Also encouraging is a scene in which Jean-Pierre and Catherine exhort an unwed mother to give birth to her baby despite her difficult situation.

TATIE DANIELLE provides a rare opportunity to experience a truly entertaining European film that does not take itself too seriously. With caution, then, TATIE DANIELLE is a film worth seeing.