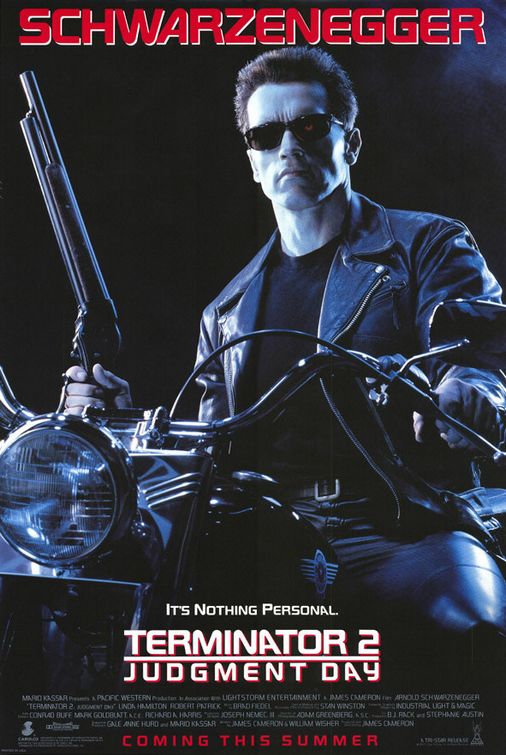 In TERMINATOR 2: JUDGMENT DAY, Arnold Schwarzenegger reprises his role as the unstoppable cyborg from the future who is sent back in time; this time to protect teenage, future-hero John Connor from the evil Terminator. The film, despite spectacular special effects, fails due to ruthless, graphic violence, slow pace, unclear message and faulty role models for children.

True to his words, “I’ll be back,” in the 1984 TERMINATOR original, Arnold Schwarzenegger does just that in TERMINATOR 2: JUDGMENT DAY. Understandably so, since TERMINATOR 2, estimated at a cost of $85 to 100 million dollars (biggest budget tally ever–much of which went to Arnold), is this summer’s most hotly anticipated sequel.

The title refers to an August 29, 1997, nuclear holocaust that wipes out over 3 billion people. Schwarzenegger’s cyborg, back from the shop and reconstituted as a good guy, makes for an effective killing machine in his new mission of protecting teenage future hero John Connor (born of the Connor-Reese liaison in 1984 TERMINATOR) from alien forces.

Meanwhile, Connor’s mother, Sarah, languishes at Pescadero State Hospital for the mentally insane in California. Seems she keeps talking about “Terminators” and the world being destroyed in a nuclear holocaust on August 29, 1997. Of course, no one believes her, so she is kept heavily sedated in solitary confinement.

The scene shifts to John and his foster parents’ house where John’s foster father tells him to do some chores. Ignoring him, a surly and rebellious John takes off with a friend on his cycle. So much for the Proverb “Children obey your parents” (Ephesians 6:1).

Shortly, a clean-cut policeman comes to the house and asks for John but will not say why he wants him. When he locates John a little later, the chase is on, since he is the evil Terminator who wants to kill John. He is also Schwarzenegger’s deadly antagonist. Connor, according to TERMINATOR I, is destined to lead the humans against the machines in the mother of all battles on August 29, 1997.

Fortunately, for John, Schwarzenegger comes to his rescue. Not wanting to divulge the film’s outcome, suffice it to say that a chase makes up the rest of the film with the evil Terminator assuming various shapes, ruthlessly killing any human in his way, and becoming nearly impossible to destroy.

The sci-fi effects in TERMINATOR 2 are dazzling and remarkable. Not only are the pyrotechnics impressive in certain scenes with huge blazing fires and thick, billowing smoke, but the evil Terminator’s “oozing” in and out of various materials, such as flooring, as he first melds with the substance, then resumes his own silvery robotic shape, takes one’s breath away.

Although TERMINATOR 2: JUDGMENT DAY, for Sci-fi buffs, is probably the ultimate in its genre, it also has a down side. The distorted view of women and mothers as depicted by Connor is deplorable. She curses like a sailor and physically attacks everyone in her way (after escaping from the hospital). The mother-son relationship, understandably, turns out to be strange. How does a child relate to a violent, foul-mouthed mother? The example set for young people in this regard is unfortunate.

The film also contains considerable violence which limits its audience. One of the questions that needs to be asked in light of film’s violence and killing (the Terminator, for example, skewers people with his sword-like arms): Can young people separate the fantastical, unreal elements (such as the Terminator being repeatedly shot or “killed” in another way but always emerging seemingly unscathed) from the truth of our own mortality? Extensive research emphatically says, “No,” which is especially disturbing when we look at the effects of such violent role-modeling on our youth and consider that over 130,000 teenagers carry a gun to school every day in the United States.

The so-called superhumans in so many movies today becomes quite disturbing when one tries to separate the real from the unreal. To the child or young person unable to make the distinction, the results could prove disastrous as he attempts to leap off buildings, play with fire, or even shoot at a friend, thinking the bullets will not harm him.

Near film’s end, Sarah Connor claims to have learned from a machine not to fear the future. As Christians, however, we don’t have to fear the future because we know the God who holds the future. Thus, the Lord says in Revelation, “I am Alpha and Omega, the beginning and the end” (21:6). We can trust Him with whatever the future holds instead of being anxious and worried about it like Sarah in this film.

Chances are you will want to skip TERMINATOR 2 (despite the special effects). In addition to the earlier problems, the pace slows to the point of boredom, the message becomes garbled and Schwarzenegger’s role switch is, finally, quite unbelievable. Despite the criticism, however, TERMINATOR 3 is undoubtedly in the works and will surface in the near future (surely before August 29, 1997!).