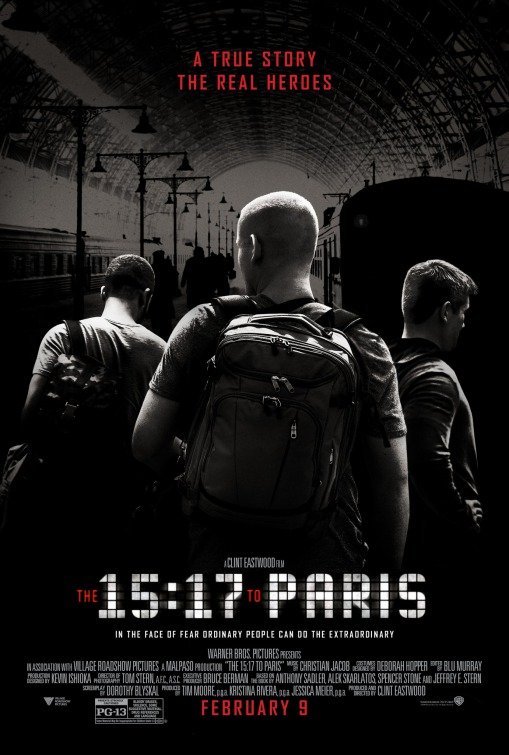 THE 15:17 TO PARIS reveals the lives of three good friends who are eventually confronted by a dangerous, life-changing situation. Alek and Spenser are best friends. At a Christian school, they are sent to the principal’s office, where they meet Anthony, who is often in the principal’s office. The three boys bond, play war games and talk about school. Years later, Alek and Spenser join the military. They meet up with Anthony to tour Europe. Everyone tells them to avoid Paris, but will the group follow God’s leading and put their lives on the line?

THE 15:17 TO PARIS is well directed by Clint Eastwood, with several emotional points. It has a strong Christian, moral worldview about sacrifice and helping others. The movie stresses God’s pre-ordained purpose in our lives. It also has a wonderful message that anyone can accomplish great, heroic deeds. One of the men twice prays a beautiful prayer, and Alek, Anthony and Spenser’s mothers are strong Christians. Even so, there’s some foul language and an unnecessary nightclub scene in THE 15:17 TO PARIS. So, MOVIEGUIDE® recommends caution for children.

(CCC, BBB, PPP, ACAC, LLL, VV, S, N, AA, D, M):
Dominant Worldview and Other Worldview Content/Elements:
Very strong Christian, moral and patriotic worldview opposes terrorism and stresses the importance of sacrificing for others and fulfilling God’s purpose in our lives, the mothers of the main characters mention God speaking to them and that God is bigger than anything, and one main character also prays several times but when the boys go to a Christian, school, the school is too strict;
Foul Language:
26 obscenities and six strong profanities (GD, and Jesus’ name used in vain);
Violence:
Strong violence includes a character gets shot in the neck and bleeds profusely, another character is stabbed in the neck and cut in his hand and bleeds, a third character is beaten and subdued, a fake body has blood all over it;
Sex:
No depicted explicit sex, but there’s some kissing and dancing at a club;
Nudity:
Upper male nudity, some girls in risqué outfits;
Alcohol Use:
Some drinking and drunkenness;
Smoking and/or Drug Use and Abuse:
Some smoking; and,
Miscellaneous Immorality:
Some overly strict Christians, strict military officers, and amoral lifestyles.

Based on a true story, THE 15:17 TO PARIS shows the lives of three good friends, Alek, Anthony and Spenser, who go on an adventure that sends them into a dangerous, life-changing crisis. THE 15:17 TO PARIS has a moral, prophetic Christian worldview promoting sacrifice, but it does have some scenes that demand caution.

Alek and Spenser are neighbors and best friends. Alek and Spenser’s teacher tells their mothers that the boys may need Ritalin, but Spenser’s mom responds, “My God is bigger than drugs.” They transfer to a Christian School. Unfortunately, the two boys keep being sent to the principal’s office, where they meet Anthony, who’s often in the principal’s office too. The three boys bond, play war games and talk about school. The boys eventually move away from each other, but Spenser keeps in touch with Alek and Anthony.

Years later, Spenser has always had the desire to join the military, but Anthony doesn’t believe Spenser will persevere in that environment. This motivates Spenser to push himself as much as he can. Finally, Spenser is accepted into the United States Air Force and starts training. Though Spenser is seen as the odd man out, he works hard because he believes that being in the military will lead to helping others. Spenser also senses that something, a great force, is pushing him towards a purpose in life. Alek, meanwhile, has joined the Special Forces.

Spenser, Alek and Anthony decide to travel Europe together. Before Alek leaves, his mother tells him she heard from God that Alek would do something great.

When the three tell people about their plans to go to Paris, many people say they should skip it. The question is, if Alek, Spenser, and Anthony will follow the advice of those people, or follow their destiny to go to Paris?

THE 15:17 TO PARIS has a strong Christian, moral worldview, with a great message of sacrifice for others. The main characters are willing to do whatever it takes to help others. The movie stresses that God’s purpose in our lives is to help and love others. Also, there’s a wonderful message that anyone is capable of doing great, heroic things. The main character prays a beautiful prayer multiple times, and the mothers of the boys are strong Christians as well. Though this is the case, there is some cussing and one scene in a club that could have been avoided. Therefore, MOVIEGUIDE® recommends caution for younger audiences.

Clint Eastwood does a great job directing THE 15:17 TO PARIS, which has several emotional high points. The real men play themselves. They do a great job acting, especially considering that it’s their first role. It’s clear that Eastwood helped them produce their best work. Though this is the case, the movie lacks some jeopardy in the middle. However, watching the movie felt like watching these three men in their everyday lives. Eastwood (SULLY, AMERICAN SNIPER, JERSEY BOYS) has become a master at making real people come alive on screen.