THE ADVENTURES OF PINOCCHIO 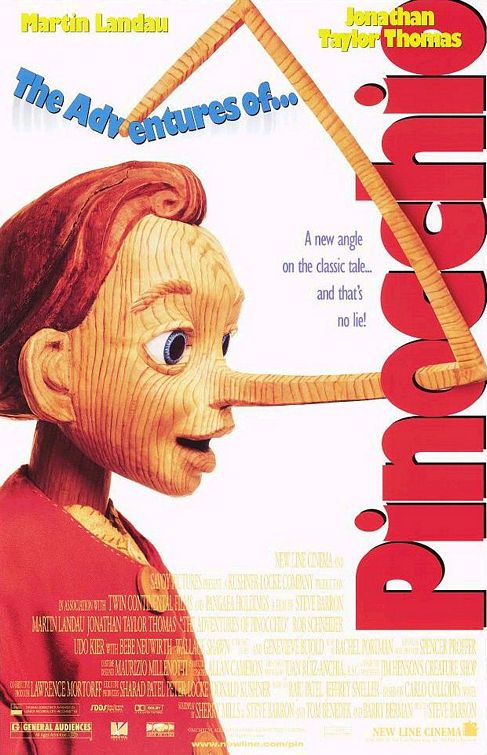 THE ADVENTURES OF PINOCCHIO is a faithful, live-action adaptation of the classic children's novel. Marred by some questionable plot devices including magic and lying, the movie nevertheless teaches many biblical principles, including the principles that lying is wrong, fame is not love and that other people are more precious than gold. Pinocchio learns these lessons as he travels a moral journey from puppet to human.

(BB, O, L, V, M) Moral worldview teaching several clear moral principles such as "you should not lie," "you have to stand for your convictions" & "people are more important than money" marred by lying used to solve a plot problem & vengeful lying to get back at thieves, also some magical thinking, a reference to witch & magical elements; no language; fairy tale violence including punching, shoving, frightening fire sequence, frightening carnival sequence; and, lying, cheating & stealing, which are all rebuked

Produced in Italy, THE ADVENTURES OF PINOCCHIO is a compelling story for children of all ages. The story opens with Geppetto carving the initials of the one he loves, Leona, on a tree in the forest. Years later, he carves Pinocchio from this tree, and the puppet comes to life. Two thieves notice Pinocchio and decide to sell him to Lorenzini the puppet master. With his conscience, Pepe the cricket in tow, Pinocchio learns that fame is not love and that other people are more precious than gold. Geppetto goes looking for Pinocchio, thinks that the puppet has been washed out to sea and heads after him. Meanwhile, Pinocchio causes Lorenzini to fall into his own magic potion which turns him into Monstro , the giant fish. Pinocchio heads out after Geppetto and becomes a real boy.

This is a very well-made movie with Martin Landau giving a superb performance. Although it is a powerful morality tale, the movie is flawed by magical elements and the fact that Pinocchio consciously lies to extend his nose so that Geppetto and he can get out of Monstro . On the other hand, the movie teaches that lying is wrong, love your brother, put others before yourself, do not succumb to temptation, do not be seduced by fame, and many other biblical principles.

Rent or Buy THE ADVENTURES OF PINOCCHIO: