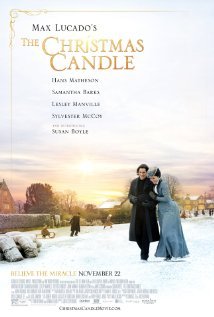 THE CHRISTMAS CANDLE is a faith inspiring movie that tells a heartwarming story of Reverend David Richmond, who’s brought in to be the minister of the small English town Gladbury in the late 1890s. The town is known for their Christmas candle, a candle that’s supposedly blessed with healing powers by an angel every 25 years. As David goes about ministering to the town, polarizing views of God’s healing power causes friction. In the process, both David’s faith and the faith of Gladbury are tested.

THE CHRISTMAS CANDLE is entertaining and incredibly moving. Except for a rough and confusing beginning, every other part of the movie is praiseworthy. The acting is believable, the sets are immersive, and the story is powerful. Best of all, the movie upholds faith, prayer, God’s providence, and redemption. The faith of both the Reverend and the townspeople are tested as they learn more about God’s real healing power. The movie is void of objectionable content and only contains one intense scene involving a fire. THE CHRISTMAS CANDLE is an engaging, faith-building movie the whole family can enjoy.

(CCC, BBB, V) Very strong Christian, Biblical worldview upholding and exhibiting prayer, faith, and redemption, several scenes take place in a church during a service, multiple references to God’s providence and sovereignty, and God’s power through healing and miracles is also seen; no foul language; a few intense scenes, one involves a fire in the church that causes a man to have a heart attack, and the other takes place in a blizzard where a carriage crashed; an unmarried woman is pregnant and a light kiss at the end; no nudity; no alcohol; no smoking or drugs; and, nothing else objectionable.

Gladbury is a small English village with a vibrant Christmas tradition. Legend has it that, for over two centuries, every 25 years, an angel visits the local candlemaker and touches a single candle. That candle is then given to someone in need, and if they light it and pray, their prayers will be answered on Christmas Eve.

In 1980, technological advances, such as electricity are a thing of the future, and church is a thing of the past, or so some think. David Richmond, a young minister who gave up preaching because of a past tragedy, chooses to serve God by serving the poor instead. That is, until a longstanding member of Gladbury convinces David to use his gift of preaching to reinvigorate the faith of Gladbury by becoming the town’s minister.

Upon arriving in Gladbury, David realizes how important the Christmas candle is to the people. Immediately, he questions their superstitious belief in the candle and proceeds to correct their old-fashioned thinking.

Meanwhile, the candlemaker, whose family has carried on the Christmas candle legacy for two centuries, fights to keep its flame alive amid the changing times. As Reverend Richard pushes more change on the town, and Gladbury pushes their tradition on him, tension rises and everyone’s faith is tested.

Despite a rough and confusing beginning, THE CHRISTMAS CANDLE develops into a wonderfully entertaining and incredibly moving movie. Hans Matheson as Reverend David is charming. Also, the lovely Samantha Barks (LES MISÉRABLES) is pleasant and witty as David’s unlikely skeptic ally, Emily Barstow. The rest of the cast, including singing sensation Susan Boyle in her feature film debut, is also memorable in their different roles. The sets, costumes, and production design in THE CHRISTMAS CANDLE make the audience feel as if they are in the late 1800s.

Though the story occasionally moves in too many directions and focuses on too many characters, the movie still manages to pull everything together into a gratifying, uplifting conclusion.

Best of all, THE CHRISTMAS CANDLE upholds faith, prayer, God’s providence, and redemption. Reverend David is kind and caring to all those in need, but he no longer believes in God’s supernatural healing because of a past tragedy. In contrast, the people of Gladbury put their faith in this one candle and, at times, lose sight of God, who is capable of healing anyone at any time. As these two polarizing views clash, sometimes comically, the story ultimately leads the characters to Christ. The movie is also void of objectionable content and only contains one intense scene involving a fire that causes a man to have a heart attack. Otherwise, THE CHRISTMAS CANDLE is an engaging faith-building movie the whole family can enjoy.

Rent or Buy THE CHRISTMAS CANDLE: