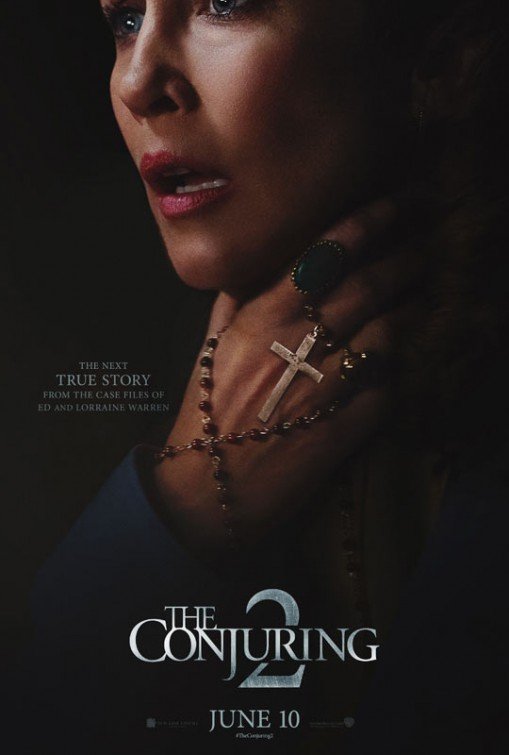 THE CONJURING 2 is a masterfully directed horror thriller about real-life Catholic demonologists Ed and Lorraine Warren, who investigate possible supernatural activity in Enfield, England in 1977. Asked by the Catholic Church to see whether the case is a hoax, the Warrens look into strange happenings at a house. Committed to their faith and to saving the demonically oppressed family living in the house, Ed and Lorraine face their darkest, deadliest spiritual battle.

What sets THE CONJURING 2 apart from typical Hollywood movies is the perfected, suspenseful timing, pace and rhythm Director James Wan brings to his stories. The most pleasant, positive aspects of THE CONJURING stories are always Ed and Lorraine’s faith in Jesus, which is the only power we have over supernatural evil. MOVIEGUIDE® advises extreme caution, however, because of some scary and intense elements, brief foul language and a few theologically weak, occult points, including a watered-down version of spiritual warfare. Hollywood often applies a certain levity to this kind of subject matter, so spiritually sensitive moviegoers should be cautious before choosing to watch movies like THE CONJURING 2.

(CC, BB, O, FR, L, VV, D, M) Strong Christian, biblical worldview of fighting against supernatural evil, and the only power shown over evil is the name of the Holy Trinity, woman reads her Bible, Christian Christmas carols are played throughout, woman says the demon is trying to “attack her faith,” and her husband says her visions are a “gift from God,” husband also tells boy, “God will be there for all who need,” and biblical and moral messages about family, love and marriage, with some borrowing from occult practices such as channeling, and children use a Ouija board which is the start to their demonic oppression, and an old man’s spirit haunts a house, and some theologically weak elements where crosses and chants are used more as a weapon against demons, and less of an emphasis on a personal relationship with Jesus; four light obscenities, five light profanities, and British slang like “bloody” and “wanker”; moderate violence includes woman sees a vision of man who shot his whole family while they were sleeping, some blood splatter, a vision of a man being impaled by a branch, very scary images of demonic possession and oppression, girl is possessed and speaks in low raspy voice, a demon with a disturbing face wearing a nun outfit haunts characters, furniture is thrown across the house, and girl levitates, multiple people are bitten by demon, and many scary images; no sex scenes, but a reference to a man’s affairs; no nudity; no alcohol use; no drug use, young girl smokes cigarette, but gets in trouble; and, school boy calls a girl a “lesbo.”

THE CONJURING 2 is masterfully directed horror thriller about the Catholic real-life demonologists Ed and Lorraine Warren who investigate a case of supernatural activity in Enfield, England in 1977. Stateside, the Warrens are looking into The Amityville Horror case that gained a lot of press, but much of which claimed the case was a hoax. The cases start to wear on Lorraine, especially when an evil spirit communicates its desire to hurt Lorraine by killing Ed. She asks Ed if they can stop taking cases.

Meanwhile in England, Peggy Hodgson, a single mother of four is struggling to get by since her ex-husband won’t pay child support. One night, the second oldest daughter Janet plays around with an Ouija board that sets off unusual happenings during the night. It begins with little things like sleep walking, or hearing thumping noises around the house. The demonic disturbance escalates when Janet’s sister Margaret hears Janet talking in weird voices and furniture starts flying across the room. Peggy seeks help from a neighbor and the police show up. Much to their dismay, the police also witness the strange activity.

The stories of the “house of strange happenings” reach the press, leading to one infamous interview with Maurice Grosse, a member of the Society for Psychical Research. Gross and his team interview Janet, and a ghastly voice of a 72-year-old deceased man named Bill Wilkins speaks to the investigators through Janet.

Even with a number of witnesses and documentation, many are skeptical of the Hodgson story. They claim the children are playing pranks or using ventriloquism for the sake of publicity or money. Catholic Church officials approach the Warrens. They don’t want to get involved in the case until the Warrens can confirm it’s not a hoax. Reluctantly, the two agree to take on another case.

Arriving in Enfield, Lorraine doesn’t notice anything particular sinister or evil about the house where the Hodgson’s live, even though they do communicate to Bill Wilkins through Janet. However, as they continue to investigate, they begin to uncover a demonic entity so determined to destroy Lorraine’s faith that it may very well kill Ed.

A few things must first be said about THE CONJURING 2 before it can be properly analyzed. The screenwriters smartly address the critics of this particular case who claim it was a hoax. While the movie doesn’t side with the critics for obvious reasons, this purposeful inclusion reminds viewers not to immediately believe every claim of supernatural activity. While demonic evil does exist, discernment must be practiced so as not to fall prey to deceivers. Also, the Warrens’ actual involvement in the Enfield case has been a disputed topic for a number of years, but, hey, why should that stop Hollywood?

That said, what sets THE CONJURING 2 apart from typical Hollywood movies is the perfected timing, pace and rhythm of suspense Director James Wan brings to his stories. The most important part of a story is always character, however, and Ed and Lorraine are extremely compassionate and likable characters. This sequel puts their love and marriage at the front and center. This raises the stakes. Add in a component of mystery, fluid and immersive camera work, and very scary music, and the movie is a thrilling ride, though deeply disturbing.

The most pleasant and positive aspects of THE CONJURING stories are always Ed and Lorraine’s faith. For example, Ed describes Lorraine’s visions as a “gift from God.” Also, Lorraine says the demonic entity has taken on a “blasphemous form to attack her faith.” Finally, Lorraine is seen reading her Bible, and invoking the name of the Holy Trinity a strong power in the movie. While this is good, there are two problems with THE CONJURING 2 that don’t ruin the movie, but does hinder it.

First, while faith is integral, it’s a weapon more than anything else. Ed and Lorraine practice their faith, but never do viewers see them turn to God in prayer, or encourage those being demonically oppressed to do so as well. In the end, they turn to each other and state they couldn’t have won without the other person. For Christian viewers, you may be wondering, “What about Jesus? Are you going to give Him any credit?”

Secondly, the examples of supernatural activity and how Lorraine specifically battles it are sometimes borrowed from occult practices. For instance, at the very beginning of the movie, Lorraine channels the murderer in the Amityville Horror case in a fashion that looks very similar to a psychic circle. This is just one of a number of situations that is clearly influenced by Hollywood storytelling rather than orthodox teaching on demonic powers and how to engage with it.

Both of these caveats are important to mention to remind readers that, while THE CONJURING 2 may be based on a true story, and demonic evil is very real, the movie is a Hollywood tale. Thus, it shouldn’t be used as a “how to” on overcoming spiritual oppression.

Even with all the Hollywood elements, however, watching THE CONJURING 2 viewers probably will get a strong sense that the filmmakers truly believe in the spiritual subject matter they’re addressing. Before production began on the sequel, James Wan tweeted a photo of a priest blessing the set and praying over anyone who wanted prayer before they started filming. Even so, there’s a levity to this subject matter that shouldn’t be taken lightly. So, spiritually sensitive moviegoers should be cautious before choosing to watch movies like THE CONJURING 2.

All in all, while THE CONJURING 2 has no explicit gore and very little foul language, the movie’s subject matter, scary images, extremely tense moments, and theologically weaker elements require extreme caution.

1. What does the Bible say about demonic evil?

2. How can we protect ourselves from dabbling with spiritual darkness?

3. What does Hollywood typically get wrong about the supernatural, and what do they get right?