"Promoting Assisted Suicide for the Elderly" 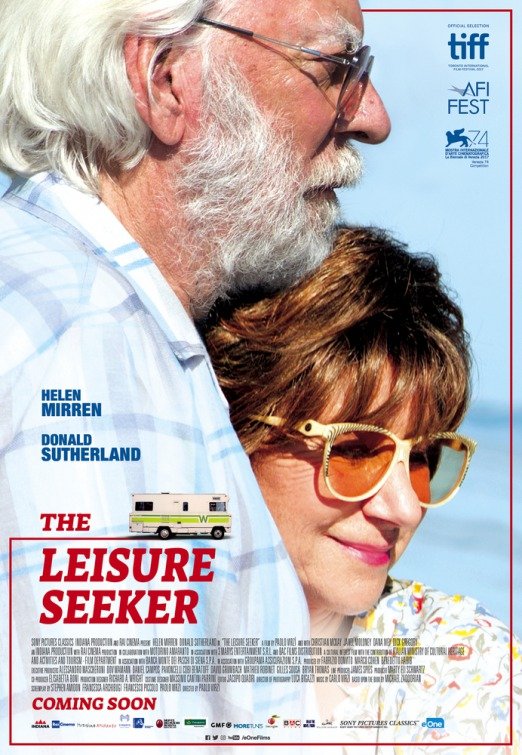 THE LEISURE SEEKER follows the adventurous road trip of a senile couple, John and Ella Spencer. Determined to see the home of John’s favorite author, Ernest Hemingway, the two take the family RV and head down to Florida, throwing all caution to the wind. John suffers from dementia. As he loses more of his memory, Ella finds it too difficult to handle, especially when John accidentally leaves her at a gas station. Ella must decide whether to stand by her husband after all these years and continue to love him without any conditions.

Helen Mirren and Donald Sutherland make the elderly married couple fun to watch, but THE LEISURE SEEKER is dominated by a Romantic, politically correct worldview. The elderly couple is guided completely by their hearts. The movie also contains lots of foul language, many sexual innuendos and references, some crude humor, and themes of assisted suicide. It also mocks Trump supporters at a Republican rally. The hateful mockery of Trump supporters is false leftist propaganda, but the movie’s support for euthanasia is truly abhorrent. THE LEISURE SEEKER is not acceptable entertainment.

(RoRoRo, PCPCPC, B, FRFR, LLL, V, SS, AA, DD, MMM) Very strong Romantic, politically correct worldview with some moral elements but promoting assisted suicide for the terminally ill (in this case the elderly) as an elderly married woman and her husband suffering from dementia abandon all reason or logic in order to be together with each other as much as they can and to pursue one last time of pleasure before the old man’s desired mercy killing/suicide, the desires of the married couple are portrayed as what is “right” even though it might not necessarily be morally or biblically right, and Republicans at a Trump rally are depicted in a superficial light as white trash, who hate Muslims and immigrants; at least 27 obscenities (including one “f” word), plus some name-calling and potty humor as the two main characters enjoy the occasional toilet, scatological jokes about passing gas, burping and body parts; light violence on a few occasions such as the main characters are robbed at knife point by some “punk kids,” the wife gets her shotgun and threatens them right back, husband makes his wife promise to stick a shotgun in his mouth and kill him when his memory loss becomes too much to bear, husband threatens his wife at gunpoint to take him to her ex-boyfriend from 50 years before, and upon finding the ex-boyfriend he then threatens him at gunpoint, although it’s done in a humorous way, and he’s unaware the gun isn’t even loaded; moderate and light sexual content includes husband becomes aroused as his wife cleans him after he wet his pants, and they proceed to have intercourse, many innuendos regarding the sexual activity of the older married couple, crude phrases, during one of the husband’s memory loss spells he essentially confesses that he was having an affair for years with their neighbor while his wife was pregnant with their son, and insinuations about oral sex; no nudity; married couple enjoys drinking whiskey, they have celebratory champagne and the wife becomes too drunk and vomits on the carpet, the wife makes comments throughout about needing a drink, and drinks by herself when she learns some disturbing news, the couple stumble upon a Republican Party rally, and people in the crowd are all drinking canned beers; no smoking but the elderly married couple are older and on a lot of prescription medication, and they don’t always use it solely for its intended purpose; strong miscellaneous content includes moral relativism, a few examples of family dysfunction as the children yell at and scold their parents for what they’re doing, and a few examples of lying and deception.

THE LEISURE SEEKER follows an inseparably close married couple, John and Ella Spencer, as they decide to run away and have one last road trip adventure together while they still can. Their son arrives at their house prepared to take his father to a home where he can be cared for as he deals with sporadic memory loss, only to find that no one is home and the family RV is gone. The couple is back on the road, any caution or reason being thrown to the wind as they embark on a road trip down to Key West in Florida so that John can finally see the home of his favorite author, Ernest Hemingway. Their children are mildly panicking as their father pilots this massive vehicle in his condition, but Ella assures them, through untraceable payphone calls, that she and their father are fine, and that they need to take this last trip together.

As John and Ella make their way to Florida from Massachusetts, their senile state proves to make things quite a bit more challenging for them than it was before. The people they encounter along the way really don’t know how to respond to their nonsensical chatter and eccentric personalities. The poor diner waitresses and gas station attendants reluctantly listen to their unnecessarily extensive stories, showing how unjustifiably lonely people tend to become with age. With John’s memory loss becoming more and more difficult to handle, Ella tries very hard not to get frustrated with him. This proves to be quite the challenge when he doesn’t remember her name, leaves her at a gas station and makes a startling confession when he believes she’s someone else. Ella has to decide whether to choose love over all else, even when she doesn’t want to.

THE LEISURE SEEKER begins a bit rocky, as the viewer is not immediately drawn in by the son’s unconvincing dialogue delivery. However, Helen Mirren and Donald Sutherland take the story and make it impossible not to strongly empathize and love these characters. They are bonded together by a lifetime of love, and it’s very easy for the viewer to believe their history and their unwillingness to be apart from each other. The audience can easily see their own grandparents in these characters, which makes for quite an entertaining story to follow.

However, the story is dominated by a very strong Romantic worldview with strong politically correct elements. John and Ella follow their hearts and the love that they have for each other to guide them. There is very little of a guiding compass, as the moral code by which they live is quite relative, and they’re just acting on what they believe their hearts are telling them. THE LEISURE SEEKER contains an extremely high amount of questionable content throughout the entire movie. It includes lots of foul language, a strong amount of sexual references, jokes and innuendoes, and a politically correct story guided by moral relativism. The movie not only promotes assisted suicide and suicide for the terminally ill; there’s also a scene where the husband cheers during a Republican rally for Donald Trump, where Trump supporters are depicted as white trash who hate Muslims. The hateful mockery of Trump supporters is over the top leftist propaganda, but the movie’s support for euthanasia is truly abhorrent. So, THE LEISURE SEEKER is far from acceptable entertainment.

By the way, the movie’s title is what John and Ella affectionately call their RV.