THE MAZE RUNNER: THE SCORCH TRIALS

"Escape to Freedom and Danger" 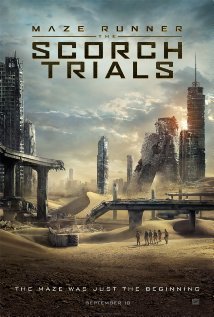 MAZE RUNNER: THE SCORCH TRIALS is the second part of a popular series of Young Adult novels. After being rescued, the main teenage hero, Thomas, sees his friend, a female named Teresa, led away by their rescuers. He and another boy, Arris, find rows of teenagers, including Teresa, in suspended-animation comas with fluid being drained from them. Fearing for all their lives, they rescue Teresa and go on the run with their friends in search of a rebellion group’s camp in the distant mountains. They must cross a harsh and enormous desert, encountering numerous dangers and pockets of human civilization along the way.

MAZE RUNNER: THE SCORCH TRIALS features exceedingly well-shot action and solid acting across the board, but the final battle is a bit confusing. The addition of zombie-like creatures is cliché, but the addition is nonetheless fun. The story extols many positive moral, redemptive values, including courage, kindness, selflessness, teamwork, and sacrifice. It’s also free of the usual depictions of teenage sex and lust. However, there is some foul language, scary images and intense violence. So, strong caution is advised.

(BB, C, LL, VV, A) Strong moral worldview with some redemptive elements where courage, kindness, selflessness, teamwork, and sacrifice are exhibited in the characters; 15 obscenities, three light profanities, and one character gives a villain a “middle finger”; strong action scenes includes numerous zombie-like creatures attacking the teenagers and being fought off with punching, kicking, throwing, and hitting with pipes and other objects, teenagers subjected to peril as they are chased on foot and by numerous vehicles as they race to escape medical experiments, numerous gunfights using both real guns and guns with an extended electrocution Taser-like effect, multiple bombings and explosions affect major property damage, some explosions used by villains and some are used by heroic people in self-defense and to provide cover during escapes, disturbing images of teenagers hanging in suspended animation in mid-air with body fluids being drained from them by machines while tubes put them in a coma, and one teenager attacked by the zombie like creatures becomes infected, asks for a gun, the others reluctantly agree, and a gunshot is heard in the distance after they walk away, indicating he shot himself; no depicted sex but teenage boy kisses two girls in a dream and girls turn into one girl; no nudity, but shoulders of teenage boy shown during a shower, and girl changes her top; teenagers are bribed to drink some kind of alcoholic beverage; no smoking or drugs; and, nothing else objectionable.

MAZE RUNNER: THE SCORCH TRIALS is the second part of a highly popular series of Young Adult novels, about a futuristic group of teenagers trying to cope with a mysterious plague turning people into zombie-like creatures and a mysterious group of scientists. MAZE RUNNER: THE SCORCH TRIALS has a strong moral worldview with redemptive elements where courage, kindness, selflessness, teamwork, and sacrifice are extolled, but there is some foul language and intense violence.

The movie is nearly non-stop action and starts with the main teenage hero, Thomas (Dylan O’Brien), having a nightmare about the rapid-fire elevator ride that brought him to a hidden outpost for fellow teenagers called The Glade in the first movie. He wakes up, only to find that he and the other boys are being evacuated by what appears to be a rescue team taking them to a seemingly civilized outpost with beds, decent food and lots of other teenagers.

Most of the boys around Thomas are excited by their new location, and the fact that the rescuers claim it’s just the beginning of their new lives in their post-apocalyptic world. However, Thomas sees his friend, a female “Glader” named Teresa, being led away from the overall group at the new facility. When he isn’t allowed by guards to go near her, he starts to wonder if their new home is safer than the old one, and the mystery deepens about why he keeps getting shuffled around from one strange place to another.

A mysterious loner named Arris (Jacob Lofland) sneaks through the building’s grates and offers to show Thomas what’s really happening to the teenagers who are led away, ostensibly to their new and better lives. They find many rows of teenagers, including Teresa, hanging in suspended-animation comas with tubes attached to their heads and fluid being drained out of them.

Thomas and Arris overhear a secret conversation where the head physician, Dr. Paige (Patricia Clarkson), orders the overseers to ramp up their experiments on the teenagers, who are believed to be immune to both a virus that’s turning much of humanity into zombie-like creatures, with environmental devastations in the outdoors. Fearing for their lives and the lives of others, Thomas and Arris rescue Teresa and go on the run with their Glader friends in search of a rebellion group’s camp in the distant mountains. To get there, they have to cross a harsh and enormous desert, encountering numerous dangers and pockets of human civilization along the way.

MAZE RUNNER: THE SCORCH TRIALS features exceedingly well-shot action, and solid acting across the board, in the service of an exciting thriller and mystery story as the heroic teenagers strive to find out what really happened to earth when it was hit by devastation. The addition of zombie-like creatures could be seen as clichéd in a culture awash in apocalyptic zombie tales, but the addition is nonetheless fun.

The movie also is free of the usual depictions of teenage sex and lust, keeping the movie appropriate entertainment for viewers who can handle the almost relentless action. The zombies are particularly gruesome, however, with several having their eyes poked out, which is a factor that Teresa explains in a heartbreaking story about a relative.

Beyond that, these MAZE RUNNER movies set up an interesting moral dilemma. Apparently, the scientists are using the teenagers, who are strangely immune from the problems besetting most of humanity, as a means of finding a cure for the greater populace. Therefore, the villains aren’t entirely evil, and the teenagers’ attempt to save themselves from experimentation is heavily debated as the teenagers ask themselves whether they’re just being selfish. There is some foul language, however.

The movie’s only weak spot comes in the final 15 or 20 minutes, during its extended climactic battles. So many fights, bombs, explosions, and gunfire are happening all at once in such a short time, with so many betrayals and plot twists about who’s surviving and why, that it all becomes a bit confusing. This takes away from what should have been a rousing conclusion to an otherwise superb chapter in the series. There is also a troubling scene where a teenage boy opts to shoot himself dead, albeit off-screen, rather than turn into a zombie.

Nonetheless, MAZE RUNNER: THE SCORCH TRIALS is highly effective science fiction entertainment with lots of action and smart, moral elements found throughout. Overall, THE SCORCH TRIALS is solid fun for older teenagers and adults, with a strong caution for some foul language and intense violence.