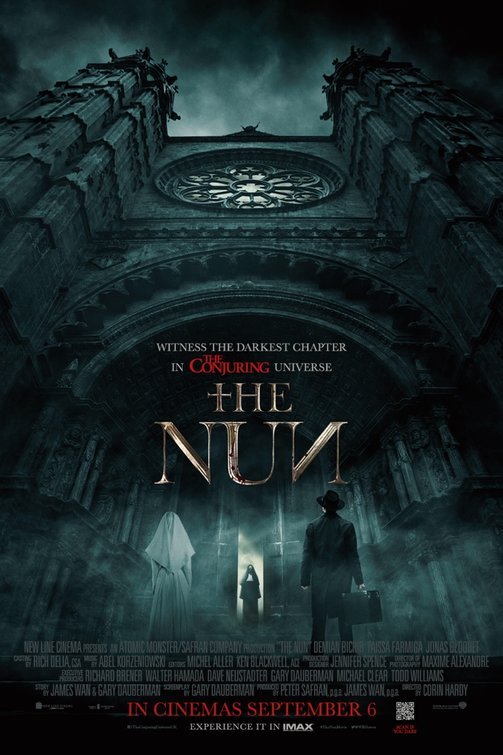 THE NUN is the prequel horror movie to the Conjuring series, this time a young nun and a priest go to an abandoned convent to see if evil exists. After a nun is found dead at an old convent in Romania, the Vatican sends Sister Irene and Father Burke to investigate. They meet a young man they call Frenchie, who takes them to the convent. It’s revealed that the building was first made for witchcraft, so Sister Irene and Father Burke must cast out the demon inside the convent.

THE NUN has some Christian, moral themes of good versus evil but doesn’t always have clear theology. The main character has a beautiful profession of faith in the middle of the movie. Also, the blood of Jesus Christ ultimately is shown to be more powerful than any evil. Despite this, many nuns die because of the demon, which implies their faith didn’t protect them. Also, for example, one nun kills herself, so the demon can’t possess her. Christians know, of course, that Jesus has already won the battle for us on the Cross.

(CC, BB, O, FR, L, VV, M):
Dominant Worldview and Other Worldview Content/Elements:
Strong Christian, moral worldview overall in a Catholic context includes Jesus Christ’s blood triumphs, sacrifice, prayer, nun has a profession of faith, nun has visions from God, and prayer leads to answers, mentions of the Bible being God’s love letter to us, a Hail Mary and an Our father said, man carries cross to protect himself, symbols of the Cross are shown, but some occult content where nuns die from demonic/satanic attacks, occult images of the satanic star, a cross is turned upside down, plus icons of the Virgin Mary lead the way, and one nun commits suicide to avoid ultimate demonic attacks;
Foul Language:
One light obscenities and one character says, “Oh Lord,” but it sounds more like a prayer cry;
Violence:
Some strong and light scary violence includes boy dies from an exorcism, bloody nun, nun hangs from a rope, some blood, nuns look like they are being killed while praying and a character is seen praying and getting whipped in the back but (SPOILER) it turns out to be a Satanic deception, nun commits suicide to avoid final demonic attacks, and (SPOILER) much of the violence turns out to be deception from Satan and his demonic forces;
Sex:
No sexual content;
Nudity:
No nudity;
Alcohol Use:
Alcohol use;
Smoking and/or Drug Use and Abuse:
No smoking or drugs; and,
Miscellaneous Immorality:
Nothing else objectionable.

THE NUN is the prequel horror movie to the CONJURING series, where this time a young nun and a priest go to an abandoned convent to see if evil exists. THE NUN has some overt Christian, moral references and themes of good versus demonic evil, but the theology is not always clear, and there are many scary scenes.

Entering the convent, Father Burke and Irene see a nun dressed in all black covering her face. She tells them they are now in vespers and no one can leave the convent, but the two of them can stay in the sleeping quarters. Once Irene goes to bed, she starts to have nightmares and wakes up hearing Father Burke buried alive. Father Burke is deceived by a demon and pushed underground into a coffin. Irene has to hear the ringing bell and find him, though the demon is deceiving her and ringing all the bells at the tombstones. Praying, Irene feels directed to a specific coffin and digs Father Burke out.

The next day, Father Burke does more research on the convent, finding out it was originally built by a man who used witchcraft and called on Satan, who is the Ultimate Deceiver of everyone. From this, they know they must clean this place of evil and bring in the Holy Spirit.

THE NUN has a Christian worldview of good versus evil. The main character has a beautiful profession of faith in the middle of the movie. Ultimately, the blood of Jesus Christ is shown to be more powerful than any evil. Despite this, many nuns die because of the demon, implying that their faith didn’t protect them, including one nun who kills herself so the demon doesn’t possess her. We know, as Christians, that the battle has already been won on the cross. Having the Holy Spirit, we can’t be taken down by Satan, unless we aren’t following God’s Will and are walking in darkness.

THE NUN is an intense, scary horror movie. The movie overall is well done, with great lighting to create a mood and good cinematography. Viewers who enjoy horror movies will enjoy this one, but it may not be quite as scary as the first CONJURING or ANNABELLE 2. Also, there are a few flashbacks that seem unnecessary and take viewers out of the story.