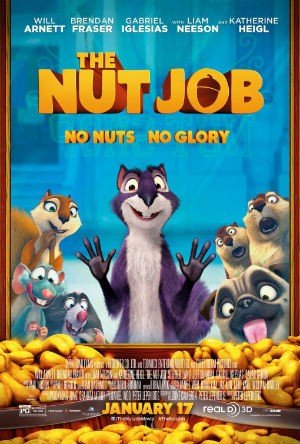 THE NUT JOB is an animated movie set in a 1950s city park. Surly is a devious, troublemaking squirrel. The park animals have been storing up food for winter, but their supply isn’t enough. When Surly gets greedy, he accidentally destroys their home and all their food with it. Because of this, they banish him from their park. When he comes across a giant nut store in the city, he decides to plan a heist. To do so, he’ll need some help. The question is, will Surly be willing to share the food with others in need?

THE NUT JOB is great fun. It has a very strong moral worldview with biblical virtues taught throughout. There’s also some redemptive elements. For example, Surly starts out greedy and proud, only looking out for his own interests. By the end, he learns what it means to be a friend and the importance of sharing rather then taking. He even sacrifices his own life for the safety of his friends. THE NUT JOB does have some light comical slapstick violence and brief scatological humor.

(BBB, C, V, M) Very strong moral worldview, with some Christian, redemptive content and values, promoting honesty, giving, justice, sacrifice, repentance, forgiveness, and discouraging pride and greed; no foul language, but several passing gas jokes and the song "Gangnam Style" is played at the end with lyrics "Sexy lady"; light action violence such as a bad guy fights with a girl scout, scary looking rats attack the squirrels, a car chase involves some gun fire between bank robbers and police, a man falls over a waterfall, a tree explodes into flames, and other light slapstick humor; no sexual content, just light kissing; no human nudity but the cartoon animals are not dressed; no alcohol; no smoking or drugs; protagonist is rude and greedy, but transforms by the end, squirrels try to rob a nut store, and an animal tries to control others through manipulation.

THE NUT JOB is a family animated movie that surprises with its heartfelt inspiring message. It’s set in the 1950s fictional town of Oakton City.

Surly is a devious, troublemaking squirrel. All the park animals, led by Raccoon (Liam Neeson), are preparing for winter by storing their food in the big oak at the city park. Surly, a greedy outcast, sets out to find his own food. Raccoon warns the park animals that there won’t be enough food for winter, so he sets two squirrels on a food mission. They include Andie, a smart, strong willed female squirrel, and Grayson, the sly “Park Hero” who’s secretly incompetent and afraid of everything.

Andie, Grayson, and Surly simultaneously try to raid a nut cart. Surly’s greed causes an accident that destroys the park oak tree and all the food inside. Raccoon decides that Surly must be banished from the park and into the city for good. Andie objects to the harsh punishment, but the animals agree, and Surly is forced to leave.

City life is dangerous for a park squirrel like Surly, but his pride keeps him from apologizing and trying to make up for his mistake. When Surly and his rat friend, Buddy, come across a giant nut store, they decide to plan a heist to steal the nuts.

Andie and Grayson show up and agree to help them with the heist, as long as Surly agrees to share the food with the park animals. Little do they know is that the human owners of the nut store are planning their own heist – a bank across the street. As the two heists take place, plans are set and true character motives are revealed.

THE NUT JOB is a lot of fun. The animation isn’t on par with Pixar or DreamWorks, but like the 2005 animated hit HOODWINKED, the fun characters keep the story immersive. The only flaw is that the heist plot gets a little hard to follow near the end because of the plethora of characters.

Happily, the movie has a very strong moral worldview with Biblical virtues taught throughout. Surly starts out greedy and proud, only looking out for his own interests. By the end, he learns what it means to be a friend and the importance of sharing rather then taking. He even sacrifices his own life for the safety of his friends. Other positive values include Andie sticking up for Surly, stating it’s unjust for him to be banished without a proper trial.

Additionally, the movie does a great job establishing its villains. However, the entire plot of the movie revolves around animals stealing from a nut store owned by humans. It becomes more complicated when the nut store and the nuts themselves are fronts for the evil bank robbers. Even so, the movie does all this without vilifying all humans, unlike the politically correct animated movie ESCAPE FROM PLANET EARTH and FREE BIRDS. THE NUT JOB avoids clichés by teaching positive lessons through fun, well-developed characters in an entertaining and safe way. A light caution for young children is advised due to a chase sequence at the end and some light scatological humor.

Rent or Buy THE NUT JOB: