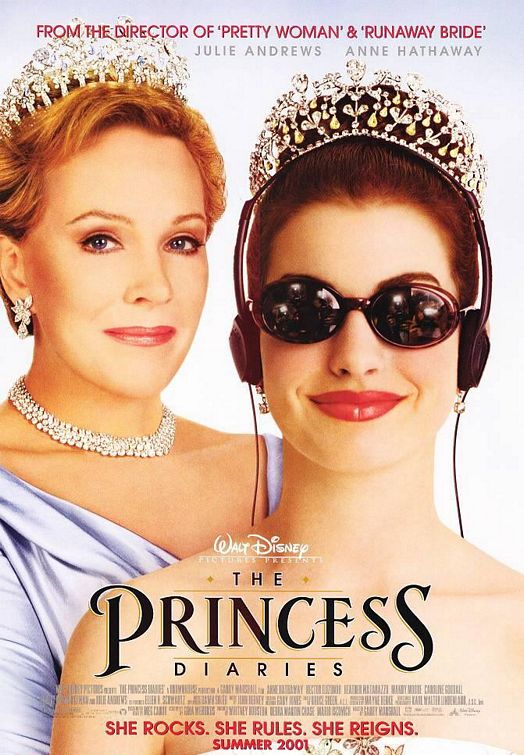 Newcomer Anne Hathaway stars in THE PRINCESS DIARIES as Mia Thermopolis, an awkward 15-year-old girl in San Francisco. One day, Mia is stunned to learn that her grandmother has just shown up and wants to have tea with her. Mia is resentful. She feels that her father abandoned her and that her grandmother never took interest in her. When she goes for tea, she finds out that her grandmother is Queen Clarisse Renaldi, played with aplomb by Julie Andrews. Queen Clarisse tells Mia that she is a princess and has to assume her rightful role now that her father has died, or the Kingdom of Genovia will cease to exist. The Queen and her entourage have only two weeks to turn Mia into a real princess.

THE PRINCESS DIARIES is a delightful discovery. This movie has been carefully crafted. The script is coherent. The plot is intriguing. The unexpected carries viewers along, and the acting is good. In fact, the whole process of turning Mia into a princess is a process of learning how to be responsible for your actions, live a virtuous life and do the right thing in the face of adversity.

For anyone who says they don’t make movies like they used to, especially for teenagers, THE PRINCESS DIARIES is a delightful discovery. This movie has been carefully crafted. The script is coherent. The plot is intriguing. The unexpected carries viewers along. The acting is good. With proper marketing, it should be a hit with young women and boys.

That being said, it must be noted that we give four stars to THE PRINCESS DIARIES for the high quality of its entertainment. This is an entertaining movie, and the team that put it together are experts. However, it is not a great movie, though it doesn’t have the flaws that would take away a star. THE PRINCESS DIARIES is what it is, a wonderful example that you can make a really fine G-rated movie for teenagers.

Every little girl wants to wake up some day and discover she’s a princess, to be treated with respect and love. In this ugly duckling turns into a beautiful swan story, our heroine, Mia Thermopolis, played wonderfully by newcomer Anne Hathaway, discovers not only that she’s a princess but that being a princess means more than what you get. It means that you start serving the people around you.

Complete with frizzy hair and Catholic school uniform, 15-year-old Mia has not yet reached her puberty and is invisible to the “A crowd” in her private San Francisco school. When she says “hi” to the teacher, the teacher ignores her. One student almost sits on her by mistake, saying, “I didn’t see you.” Her self-consciousness is so intense that she can’t even get a couple words out in a debate. Instead, she runs away to get sick.

Her mother, Helen, is a fun-loving artist who lives in a reconditioned firehouse, a place so appealing that it was one of the high points of the movie for some of the young girls in the audience. She tries to help Mia with words of wit and wisdom to make the difficult transition into maturity. Helen even goes so far as to date Mia’s debate teacher, pointing out that he’s not married, not pierced, not tattooed, and not hair-plugged, a rare commodity in San Francisco.

On the fateful day of invisibility, Mia is stunned to learn that her grandmother from Europe has just shown up and wants to have tea with her. Mia is a little resentful. She feels that her father abandoned her and that her grandmother never took interest in her. When she goes to visit for tea, she finds out that her grandmother is Queen Clarisse Renaldi, played with aplomb by Julie Andrews. Queen Clarisse tells Mia that she is a princess, and that she has to assume her rightful role now that her father has died, or the Kingdom of Genovia will cease to exist. Clearly, Genovia is much like the principality of Monaco, including the similarity of the surnames of the royal family.

Mia doesn’t want any part of this scene. She is upset that her mother lied to her all these years. She finds out that her mother and father loved each other, but he felt called to keep Genovia intact and serve his people while her mother pursued her artistic vision in San Francisco. After a bit of a tantrum, she agrees to be presented to the representatives of several nations at a state banquet in a couple of weeks. Thus, the makeover begins.

Joseph, played with a twinkle in his eye by Hector Elizondo, has to take care of Mia. When he buys her ladies shoes, he is shocked by the attitude in San Francisco when the store salesperson asks if he wants them wrapped or if he wants to wear them now.

The whole process of turning Mia into a princess is a process of learning how to be responsible for your actions, live a virtuous life and do the right thing in the face of adversity. After this entertaining movie leaves the box office, it should be used in schools throughout the country just to show children the civility to which they should aspire.

During this transition process, the foibles of human nature are exposed. The cheerleaders are catty until they find out that Mia is a princess, at which point they try to tell the press what good friends they are with her. Josh, the big man on campus, dumps his cheerleader girlfriend for Mia, only so he could get some publicity. Paulo, the makeover artist, exposes Mia’s royal credentials to the press so that he can get more business.

Background jokes include a loudspeaker announcement at the school asking the feng shui club to stop arranging the furniture so that the classes can begin. Feng shui is an Eastern philosophy which says, among other things, that the spirits will bring disaster on your house if you don’t put your furniture in the right place. Whether this joke will work in Idaho, it is very humorous in the confused lifestyle of California.

Accepting responsibility for your actions abounds in the movie from Queen Clarisse learning to accept Mia as her granddaughter to Mia’s friend Lilly confessing that she needs an attitude adjustment for her resentment and jealousy at Mia’s newfound fame and fortune. Furthermore, at the critical point in the movie, Mia cries out to God for help. In fact, this movie is so chock full of good messages that this review could go on and on and on extolling its virtues.

For anyone who says they don’t make them like they used to, this proves that they can do it even better. THE PRINCESS DIARIES is a wonderful, wholesome filmmaking gem, a movie that children and young teenagers should want to see over and over. All MOVIEGUIDE® can say is thank you, filmmakers, for THE PRINCESS DIARIES.