THE RIGHT KIND OF WRONG 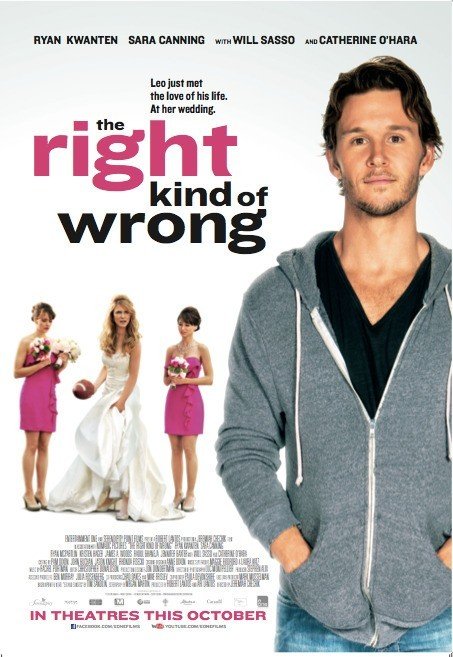 THE RIGHT KIND OF WRONG is a romantic comedy. It follows Leo Palamino, a failed writer and affable guy in his absurd pursuit of the woman of his dreams, beginning at her wedding! Leo’s ex-wife has gained notoriety for her blog about Leo, WhyYouSuck.Com. She’s made Leo the butt of jokes all over town. An accidental encounter with a bride standing outside the church across the street leads to Leo falling in love. Undeterred by her new marriage, Leo begins a tireless pursuit, aided by the bride’s own estranged mother. Leo the stalker refuses to give up until he’s convinced her she’s made a horrible mistake.

THE RIGHT KIND OF WRONG is at times very funny, with strong comedic performances. On the surface, it’s a quirky romantic comedy with a lot of heart. The problem is, the movie promotes adultery and undermines the institution of marriage with incredible flippancy. Making matters worse, it contains excessive lewd content and foul language. So, THE RIGHT KIND OF WRONG is the wrong kind of movie for media-wise viewers seeking something more wholesome to appreciate.

THE RIGHT KIND OF WRONG is a romantic comedy that follows the affable Leo Palamino (Ryan Kwanten), a failed writer, in his absurd pursuit of Colette, the woman of his dreams. The problem is, she happens to have just gotten married to Danny (Ryan McPartlin), the golden child of a local tycoon in a small Canadian mountain town.

The story begins with Leo’s own wife, Julie, dumping him, almost out boredom. She ridicules Leo for his absurd and crippling fear of heights. She’s even created a blog all about him, whyyousuck.com, and it’s a massive hit. Now, Julie’s riding the media circuit and has a book deal.

So, Leo is left mulling in his own misery when his restaurant boss and next door neighbor, Mandeep, sends his two children over to cheer him up. Throwing a football around with the children, the ball flies off course across the street, accidentally hitting Colette (Sara Canning) in her wedding dress, just as she’s about to enter the church and marry Danny. It’s love at first sight for Leo. He leaps into action, cleans up, suits up in record time, and crosses the street, crashing the wedding. Sitting in a back pew, an eclectically dressed middle-aged woman, Tess (Catherine O’Hara) enters and sits next to him. The two hit it off and arein total agreement that this is a terrible match. Tess just happens to be Collette’s own estranged mother. Next thing you know, she’s driving Leo to the wedding reception at the home of her new and über-wealthy in-laws.

Leo shamelessly enters the house, finds Colette, and proceeds to ask her to coffee. “This is my wedding!” Colette says. “We all have baggage,” Leo replies. Colette’s new husband discovers them, and Leo finds himself booted out the front door and walking home. However, he remains smitten and undeterred.

Leo stumbles across a rare “ghost bear,” a creature whose existence in this part of the country is impossible. He takes it as a sign he should pursue his impossible dream and continue going after Colette.

Leo returns to his job where he works contentedly as a restaurant dishwasher. The job gives him what he expects and never disappoints. Meanwhile, as he hides out in safe mediocrity, he’s got a talent for juggling that’s astonishing. With cat-like reflexes, he catches plates flung from out of sight across the kitchen. All the while, he speaks to his boss, Mandeep, formulating plans for his pursuit of Colette.

Enter Neil (Will Sasso) and his wife Jill (Jennifer Baxter). Neil and Jill, married and madly in love, are like family. Neil was Leo’s publisher before his last failure. They have what he wants. He bounces his plans for getting Collette off them. They love him but think he’s nuts. When he discovers Colette runs a local Mountain tour company, he books himself on the next tour and continues his pursuit.

Mandeep decides to help his friend, recommending Leo and his juggling talents to Colette and her tour company. Unaware it’s her current stalker who’s the attraction being recommended, she arrives at the restaurant. Leo demonstrates his juggling magic for her.

On word that his ex-wife’s book is now published and a hit, Leo hits the bar to drown his sorrows. Meanwhile, jealous husband Danny gets word of Colette’s visit to the restaurant and sends an “army of children” after him. A junior high school prep club of a dozen teenagers attacks Leo in the street, beating him up, and leaving him bloodied.

A few days later, when the ghost bear appears on the local golf course drawing a crowd, Leo runs into Colette again and they actually have a moment. Her husband finds out and decides to kick things up yet another notch, getting Leo evicted from his house. Now living with Mandeep, Leo picks up his ex-wife’s book Why You Suck, and reads it.

[SPOILER SFOLLOW] Colette’s mom becomes Leo’s advocate. Estranged from her daughter, she’s determined to save her daughter from the mundane life she’s chosen of wealth and privilege. At the same time, having read his wife’s book, Leo decides to prove her and her book wrong, by tackling his fear of heights. He mounts a hand glider and tries to glide the thing all the way to the family ranch – a barbeque fundraiser for Danny’s charity. When one of Danny’s friends fires a slingshot at the hand glider, Leo crashes, spectacularly landing himself in the hospital.

Colette seems to be aware of what’s happening. She visits him in the hospital and is about to speak with him when Danny appears out of nowhere to whisk her away. Feeling manipulated and controlled, the veneer has worn off the new marriage. Reconciling finally with her mother at the barbeque, Colette begins to remember how she was raised.

Danny makes one last effort to thwart Leo’s intentions by attacking Mandeep. If Leo doesn’t disappear and leave Colette alone, Danny will report Mandeep to immigration and have him deported. Leo agrees to walk away, but will Colette realize who her husband really is, and what he’s doing? If so, will she leave him for Leo?

THE RIGHT KIND OF WRONG is at times very funny, with strong comedic performances. On the surface, it’s a quirky romantic comedy with a lot of heart. The problem is an underlying romantic delusion that undermines the institution of marriage with incredible flippancy and promotes vile adultery. Making matters worse, the movie contains excessive lewd content and foul language. So, it’s unsuitable for media-wise viewers seeking something more wholesome to appreciate.