"Being Good Is More Important than Power or Wealth" 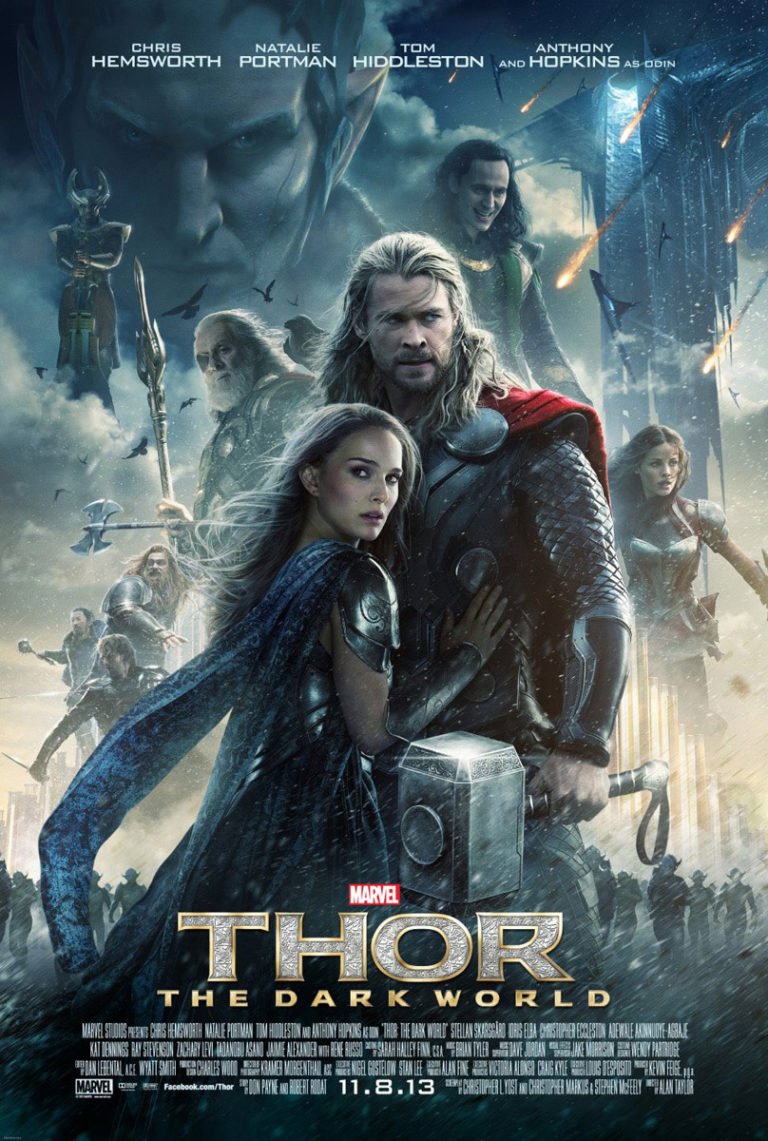 THOR: THE DARK WORLD tells how the Dark Elves once tried to use the Aether, a powerful energy source, to destroy the universe. Thor’s Asgard ancestors stopped the Dark Elves and hid the Aether energy. In the present, Thor is pining over the Earth scientist Jane Foster. A fluke allows Jane to find the Aether energy, but it infects her body. This alerts an evil Dark Elf of its whereabouts. He attacks Asgard and steals the energy. Now, Thor and Jane must find a way to stop him. Against his father’s wishes, Thor recruits his untrustworthy step-brother, Loki, to help them.

THOR: THE DARK WORLD is almost the perfect popcorn movie. The story builds excitement and fun as it develops. It relies on action, character, humor, and romance rather than violence or sex, leading to a satisfying conclusion. THE DARK WORLD has a strong moral, redemptive worldview. Doing the right thing is lifted up, as is being ready to sacrifice your life for others. There is some foul language, pixilated naked crazy man and violence, so THOR: THE DARK WORLD warrants caution.

(BBB, CCC, P, L, VV, N, A, M) Very strong moral worldview stressing doing the right thing and extolling being good over having great power and wealth, with very strong Christian, redemptive symbolism at the end of sacrifice and offering your life to save the lives of others, plus a Pro-American moment when hero angrily stops another, shady character from mocking Captain America, the United States, and the phrase “God bless America”; six obscenities and one light profanity; lots of action and lots of fighting, but not graphic and with no blood, includes spaceships and flying ships attack an opulent city and palace, explosions, use of rayguns and futuristic “blasters” and cannons, spaceship destroys part of a large palace and some statues, sword-fighting, hand-to-hand combat, hero uses powerful large hammer that can fly, superheroes battle supervillain in various locations and bang each other around and into objects, people stabbed wt swords or spear-like objects (but not graphic), slightly scary monster eats one of the villain’s minions in one bite (but not graphic), funeral held for people killed by villains, hand chopped off, but not graphic, etc.; no sex but three or so big kisses and one character celebrating a victory has his arms around two women while sitting at a table; brief upper male nudity and TV video of naked crazy man with his private parts pixilated and not shown; alcohol use; no smoking or drugs; and, hero has to go against his father, the king’s, wishes to stop a supervillain, but father displays a fair amount of hubris about his ability to stop the supervillain with force of might alone.

THOR: THE DARK WORLD is almost the perfect popcorn movie. The story builds up the excitement and fun as it goes along, leading to a satisfying conclusion. Even better, the story focuses on action, character, romance, and humor rather than violence and sex, with a strong moral, redemptive worldview. There is some brief foul language, however, but surprisingly little, and lots of action violence.

The story begins with Odin, Thor’s father, telling a story about an ancient battle. According to Odin, before the universe was born, darkness was everywhere, and a race of long-lived but mortal beings called the Dark Elves ruled. At one point, the Dark Elves tried to destroy the universe and bring the darkness back by using a powerful energy source called the Aether, which is somehow linked to dark matter. However, Odin and Thor’s ancestors in Asgard stopped the Dark Elves and hid the Aether where no one could find it.

Cut to present day. Thor is pining for the Earth woman named Jane Foster, a scientist who specializes in research into the “nine realms,” which include Earth and Asgard. However, Thor is helping his father establish order in some of the other nine realms, where their friends and allies reside. Consequently, he and Jane haven’t seen one another in two years.

Meanwhile, in London, Jane and her two interns, Darcy and Ian, discover a portal into the other nine realms in a large abandoned building. While investigating the strange portal, Jane is taken to where Thor’s ancestors hid the Aether. As she investigates, the red Aether energy infects her body, but Jane ends back safely on Earth.

While Jane was away from Earth, Thor discusses his love for Jane with Asgard’s guardian of the portals to the nine realms. The guardian informs Thor that he can’t detect Jane’s presence. So, Thor travels to Earth to investigate. He finds Jane safe, but some policemen have appeared. They try to arrest Jane for trespassing, but the Aether in her body repulses them, and she collapses.

Thor takes Jane to Asgard to find out what the strange energy substance in her body is. However, the inadvertent use of the Aether energy has awakened the Dark Elf, Malekith. Malekith is linked mentally and physically to the use of the Aether. He detects the Aether is now in Asgard. So, he leads a group of cloaked Dark Elf spaceships to Asgard to retrieve the Aether. During a big battle, a great tragedy befalls Asgard and Thor’s family. Worse, Malekith manages to steal the Aether from Jane’s body. Apparently, he wants to use the Aether energy to send the universe (including Earth, Asgard, and the other nine realms) back into darkness.

Thor believes he needs his untrustworthy brother, Loki, to help him follow Malekith, deceive him and take back the Aether. However, Thor’s father, Odin, is dead set against the plan.

Can Thor convince his father to get behind his plan? Or, will he have to go against his father’s wishes?

A couple nice plot twists in the first act help get THOR: THE DARK WORLD off the ground. The story builds from there to a grand, satisfying conclusion. The whole cast seems clearly dedicated to the spirit of fun the movie tries to deliver. Consequently, THE DARK WORLD becomes one of the better superhero action movies in the Marvel brand. In fact, it gives fans just about everything you might want in a really good THOR movie.

Except for some brief foul language, THE DARK WORLD is one of the more wholesome superhero movies. In that respect, it harkens back to Sam Raimi’s great Spider-Man trilogy a decade ago. For example, instead of violence, it focuses on action, character and humor, along with some nice special effects. It also focuses on romance rather than sex or lust. Even the movie’s romance is laced with character and humor.

THOR: THE DARK WORLD makes it clear that Thor and his family are not gods, but long-lived super beings with a high level of technology. Thus, it avoids the trap of turning Norse religious myths about multiple gods into reality. In fact, there’s one funny scene where Jane asks about a piece of technology Asgard uses. She gets an answer that makes the technology sound like some kind of religious or magical artifact, but when Jane asks what the technology does, it becomes clear that the Asgardian is using a scientific instrument, not some kind of “magic.” This may remind some viewers of science fiction novelist Arthur C. Clark’s (2001: A SPACE ODYSSEY) comment that any piece of advanced science or technology might appear to be magical to a primitive person.

THE DARK WORLD also has a strong moral, redemptive worldview. The world of THOR is a real world with real consequences – even people on Asgard die. Also, the battle against the Dark Elves is clearly a battle of good versus evil, a battle where no one can be, or should be, neutral. Even better, a piece of dialogue as well as the movie’s story shows that Thor is ready to sacrifice his life to save the life of others, not just Jane’s but all the people of the nine realms. Thus, Thor becomes a symbolic Christ-figure, a character who imitates Jesus Christ’s sacrifice for us. As such, he’s not depicted as a substitute for Jesus, but a fictional confirmation of the moral and spiritual truth of Christianity. In addition to all this, at one point Thor tells his father he’d rather be a good man than a king. Thus, THOR: THE DARK WORLD teaches that sacrifice and being good is more important than power and wealth. MOVIEGUIDE® thinks that’s a pretty good message to spread around the world as the Christmas season approaches.

That said, THOR: THE DARK WORLD does contain lots of fighting, TV video of pixilated naked crazy man and some brief foul language, so caution is advised for younger children.