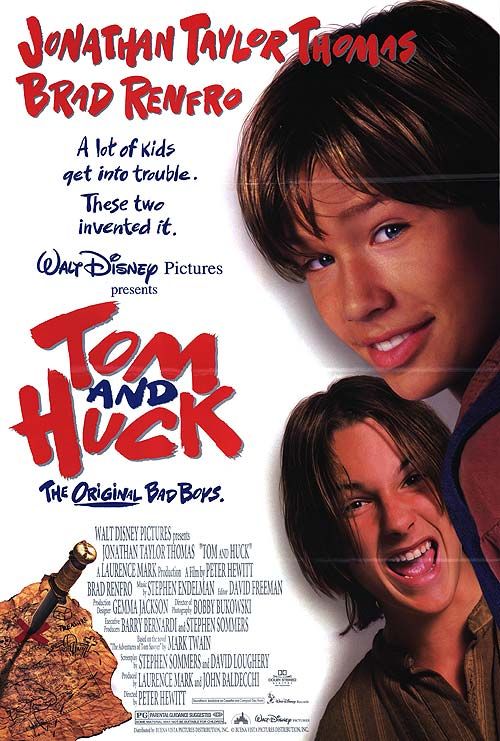 TOM AND HUCK is a faithful, entertaining adaptation of a story that has often seen the silver screen. Disney's wonder boy, Jonathan Taylor Thomas, plays the famous mischievous Tom Sawyer as he woos Becky Thatcher and keeps one step ahead of the wicked Injun Joe. Though containing some violence, TOM AND HUCK is a moral tale upholding obedience to authority and telling the truth.

TOM AND HUCK is a faithful, entertaining adaptation of a story that has often seen the silver screen. Disney’s wonder boy, Jonathan Taylor Thomas, plays the famous, mischievous Tom Sawyer. The movie starts with Tom running away from home and meeting up with the rebel Huckleberry Finn. One night they decide to go a cemetery, and witness a murder involving Injun Joe and a drunkard named Muff. Tom and Huck decide to not tell anyone, and they seal their vow in blood. Tom has a hard time not telling, because his friend Muff has been wrongly accused of the murder. At the trial, he swears to tell the whole truth on the Bible, but he remembers his pledge. At the stand, he does tell the truth, and Injun Joe throws a knife at him, but Tom holds up the Bible just in time, and the knife sticks in it. The climax involves Injun Joe trying to take his revenge on Tom as Tom tries to recover lost treasure.

This movie is pure entertainment and a good introduction to the world of Mark Twain. However, the story itself is not sanitized and parents should beware. Though tastefully done, it does feature rebellious boys, a murder, a man seeking revenge, and shady characters. Yet, its redemptive message is clear: tell the truth and respect authority.

Rent or Buy TOM AND HUCK: