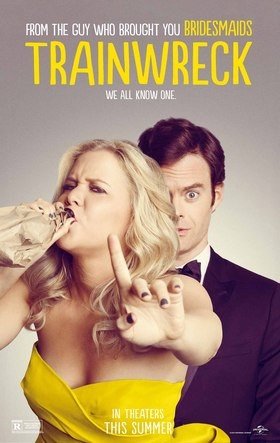 In TRAINWRECK, Amy Townsend, a commitment-phobic promiscuous woman, takes her father’s opinion that marriage and monogamy don't work. The men's magazine Amy works for assigns her to write a story on Aaron, a sports doctor working with star athletes. Attracted to one another, Amy and Aaron begin dating. When Aaron turns their fling into something more serious, Amy gets cold feet and is unsure how to respond. Can Amy make the necessary changes in order to find the happiness that eluded her parents?

TRAINWRECK features a brilliant, unexpected comedic performance by Amy Schumer as Amy. Another nice twist is the use of basketball stars like LeBron James as supporting characters. Overall, the script is well written by Judd Aptow, but it becomes rather predictable. A largely godless pagan worldview drives the behavior of the main characters, but a few others exhibit a more moral approach to life. Finally, despite the female protagonist deciding to change her hedonistic lifestyle at the end, the rest of TRAINWRECK contains a lot of foul language, extreme lewd content and some substance abuse. So, it’s ultimately unacceptable.

(PaPa, B, C, Ho, LLL, VV, SSS, NN, AA, DD, MM) Strong, somewhat mixed pagan worldview focusing mostly on hedonistic desires, mitigated by some moral, redemptive elements where female protagonist takes care of her father and eventually changes after realizing how empty her hedonistic lifestyle was, plus several references or jokes made about homosexuals or homosexual behavior; at least 60 profanities and obscenities, several references to male and female genitalia, one reference to feminine hygiene products, several scenes with dirty sexual language, one scene where a woman is shown vomiting; a man gets a deep gash to his forehead after falling, doctor stitches up a deep cut, a scene shows knee surgery with graphic depiction of open knee, a woman slaps a man in the face; very strong sexual content overall includes two scenes of depicted fornication, several scenes implying sex between unmarried couple, implied oral sex in one scene, talk about oral sex, it’s suggested that one musclebound character exuding masculinity is a latent homosexual, other homosexual references, promiscuous behavior, it’s implied a young intern with an older woman is into sadomasochism but it turns out he’s only 16 and nothing further happens, other crude sexual references; rear male nudity, on scene where a naked man covers his private parts with a washcloth; implied alcoholism, multiple scenes depicting drinking at home or at parties, one scene with a woman throwing out a lot of alcohol around her home; a couple of scenes showing cigarette smoking, implied drug use, one scene showing marijuana use; and, strong miscellaneous immorality includes an alcoholic father doesn’t properly take care of his family, a couple is divorced, woman makes fun of her sister’s moral lifestyle, several racist jokes are made, and magazine editor wants tabloid-style stories that promote immorality or indecency.

TRAINWRECK is about a promiscuous woman with substance abuse problems who becomes disenchanted with her hedonistic lifestyle when she meets a doctor who wants a more serious relationship. TRAINWRECK’s positive messages at the end can’t make up for all the hedonism, foul language, lewd content, and substance abuse in the rest of it.

Amy Townsend, a young commitment-phobic serial dater, was told at an early age by her father that monogamy doesn’t work. Watching her parents drift apart, her mother die, and her father diagnosed with MS, she’s convinced marriage will never be an option for her. Her sister, Kim, however, turned out differently, and enjoys the benefits of being a wife and mother. Amy constantly attacks Kim’s traditional lifestyle and even accuses her of not liking their father when it comes time for them to put him in an assisted living facility.

When the men’s magazine Amy writes for decides to do a story on up-and-coming sports doctor to the stars, Aaron Connor, they assign her to the job. With no knowledge or interest in sports, Amy reluctantly interviews Aaron and finds herself attracted to his honest, put-together charm. She throws herself at Aaron, and the two begin a relationship. Amy views it as a casual fling, expecting it to go the way of all her other relationships, but becomes alarmed when Aaron starts turning it into something more serious. Worse yet, she realizes she’s equally falling for him. Amy also realizes that Aaron’s more straight-and-narrow ways are causing her to question her own loose values.

Amy seeks solace from her sister, but their world is shattered with news of their father’s unexpected death. This drives them apart at a time when they need each other the most.

Meanwhile, Aaron’s best friend and star patient, LeBron James, is eager to see Aaron and Amy settle down. Things go awry when an important disagreement between the couple affects Aaron’s job. Although he doesn’t want to give up the relationship, Amy argues she’s a liability, and the two decide to part ways. However, she can’t shake the positive influence that Aaron has had on her life. Eventually, she must choose whether or not she wants to make the necessary changes in order to find the happiness that eluded her parents.

The biggest thing that sticks out in this movie is the brilliant comedic performance of Amy Schumer. She plays Amy as a woman with many of the same traits as the typical male player in romantic comedies. It is a reversal of roles and a more honest depiction of a woman’s relationship concerns than some might think. Another nice twist is the use of basketball stars LeBron James and Amar’e Stoudemire as supporting characters. Their acting could be better, but they’re fun to watch. Overall, the script is well structured, but it succumbs to the weakness of most scripts in the romantic comedy genre, which is being rather predictable.

The movie’s story innovations may be nice, but much of the content is not. A largely godless pagan worldview drives the behavior of the main characters, although a few exhibit a more moral approach to life. Thus, as in some of Director Judd Apatow’s other sex comedies, there’s a mix of naughty and nice, with the story skewed so that nice is the preferred choice in the end. Eventually, Amy comes to believe her hedonistic lifestyle has made her miserable, and she decides to change. The most appalling offense is the strong sexual content in the rest of the movie. Plenty of foul language accompanies it. In addition, conversations about immoral sex and homosexuality occur in several scenes. Finally, there is some marijuana use and alcoholism.

Ultimately, despite its somewhat positive outcome, TRAINWRECK lives up to its name, making it unsuitable for viewers, but especially for children and teenagers. Though the movie’s female protagonist changes her ways at the end, media-wise viewers will find much of the movie’s content unacceptable.