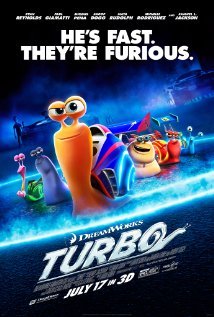 TURBO is a super-charged animated comedy, with loads of hi-octane fun, about a little garden snail with big dreams. Turbo the snail is obsessed with racecar driving. He wants to go fast like his heroes at the Indy 500. His brother, Chet, believes Turbo is trying to be something he can never be – fast. He’s also afraid his brother’s obsession will get him killed. One day, however, an accident changes Turbo’s DNA, and he becomes able to reach speeds of more than 200 miles per hour. With help from another dreamer, a taco truck owner, Turbo enters the Indy 500. This places Turbo in the kind of danger that his brother worries could get him killed.

TURBO is delightfully goofy and winsome. It has plenty of good laughs and exciting action that won’t make media-wise parents cringe. It’s one of the few animated movies that truly does seem to be designed for all ages. TURBO also resonates with a biblical, redemptive theme – we are our brother’s keeper. Turbo’s brother tries to protect Turbo, but he also learns how to support him.

(BB, CC, Ro, V, M) Strong moral worldview with an overt Christian reference to “Santa Maria” by a Mexican character and a reference to God and some Romantic elements of following one’s personal dreams, plus snail worries about his brother’s reckless behavior and tries to protect his brother but eventually learns also to support his brother; no foul language; light action violence of racing at the Indy 500, little snail hero maneuvers dangerously between cars and over rubber tire remnants on Indy 500 racetrack, child on bike tries to run over snails, snail in danger of being chopped up by lawnmower, snail in danger on freeway and ends up in the engine of a street racing car, bird predators take away snails to eat them, snail hero and his brother are in danger of being eaten themselves at one point, man tries to step on snail; no sex; no nudity; no alcohol; no smoking or drugs; and, brother snails have arguments over one brother’s dreams, as do two human Mexican brothers, hero snail and Mexican man feel misunderstood, one snail admits he’s crazy in a humorous way and seems proud about it.

TURBO is a super-charged animated comedy, with loads of hi-octane fun, about a little garden snail with big dreams. It’s one of the few (and most entertaining) animated movies that younger children also can see. It also has a great biblical theme about literally being your brother’s keeper.

The story opens with little Turbo, a garden snail, watching his favorite racecar driver, Guy Gagné, on TV in the garden shed. Turbo pretends to race across a table and reaches the finish line in 17 minutes flat, a personal record!

One day, Turbo almost gets himself killed trying to race across part of the lawn before the lawnmower comes. This just confirms Chet’s fears concerning Turbo’s obsession. Feeling rejected and depressed, little Turbo leaves home. He ends up watching the cars go by at night on the freeway. Wind from a big truck sweeps Turbo away, and he finds himself flying into a street racing car with nitrous oxide. Like Spider-Man, the effects of the gas change Turbo’s DNA, and he suddenly becomes one very fast snail, capable of reaching speeds over 200 miles per hour.

Turbo races home to tell Chet, but they get into another argument. They suddenly end up being carried away by a bird, but Turbo’s speed helps them get away. They are found by Tito, a human who runs a taco stand with his brother, Angelo. Tito races snails for money and discovers Turbo’s super powers. He wonders if Turbo’s speed can attract customers to the failing taco stand. Using his super-speed, Turbo points Tito to a sign advertizing the Indy 500 race. However, there’s a $20,000 entry fee. Also, even if the Indy officials let Turbo race, his brother Chet’s fears just might come true.

TURBO is delightfully goofy and winsome, with plenty of good laughs and exciting action that won’t make media-wise parents cringe. It’s one of the few animated movies that truly does seem to be designed for all ages. That said, there are some jokes that older viewers can appreciate, such as the reaction of the garden snails when a bird suddenly takes away one of their fellow snails. Goodbye, Charlie!

Though Turbo is the title character, the movie is also about his brother, Chet, and their relationship. Chet doesn’t understand his brother’s fascination with going fast. He also honestly fears for Turbo’s safety. This relationship is mirrored by the relationship between Tito and his brother Angelo. Tito is a dreamer, and Angelo thinks Tito is wasting his life with all his crazy schemes. Ultimately, the message of this theme is one with biblical resonance – we are our brother’s keeper.

TURBO also has a positive reference to God. Finally, at one point, Tito exclaims, “Santa Maria,” a reference to the Virgin Mary.