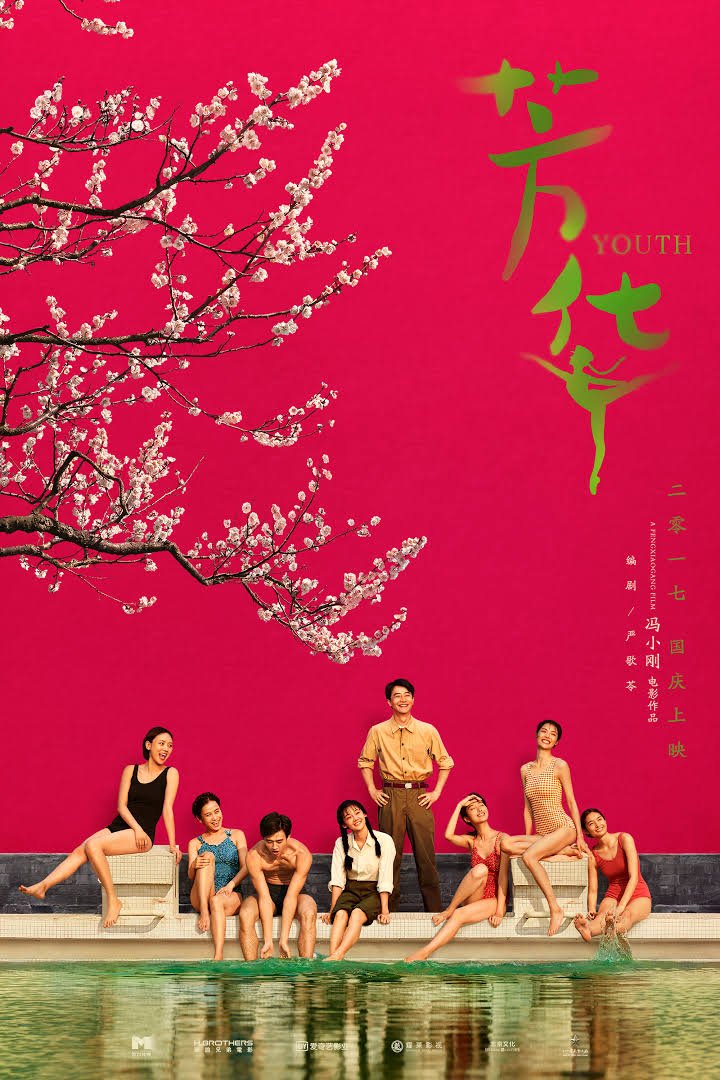 YOUTH is a Chinese drama about a young man and a young woman who become part of a propaganda performance group in the Chinese military in the 1970s. The woman is new to the troupe in the People’s Liberation Army. She has trouble fitting with the other women. Meanwhile, the man falls for one of the main dancers. Eventually, the man and the woman are shipped to the front lines in the 1979 war between Communist China and Communist Vietnam. Vietnam had overthrown China’s brutal puppet regime in Cambodia.

YOUTH has multiple layers as it depicts several periods in modern Chinese history. Themes of unrequited love, sacrifice, humility, and honor are contrasted with pride and privilege. Much of the central story centers on the virtues and vices of the young adults in the propaganda performance troupe. Although the movie avoids dealing directly with political issues, it still reflects the communist, anti-capitalist settings in which it takes place. Thus, there are scenes of Chinese dancers waving fake rifles as they portray their communist country’s alleged political struggles. YOUTH also contains some extreme wartime violence.

(RoRoRo, PCPC, CoCo, AcapAcap, RHRH, B, C, FR, L, VVV, A, D, MM) Very strong Romantic worldview, taking place from the 1970s to the early 1990s in Communist China that, although it doesn’t focus on political matters, does reflect the politically correct, communist, pro-revolutionary, and anti-capitalist social perspective of its places and times, and ends up romanticizing the Cultural Revolution, with some moral elements (including antiwar and anti-bullying messages) and some redemptive elements of sacrifice, plus a man speaks of his hopes for reincarnation; five obscenities and one profanity when girl marvels at beautiful music saying “oh my God,” some toilet humor as girl is teased and ostracized for being smelly, and girl vomits; very strong violence during war scenes as soldiers are shot at point-blank range, soldiers are blown up by bombs and dismembered, burn and bomb victims having loss outside layer of skin from head to toe, and a soldier shot in arm loses a lot of blood; no sexual content but a man kisses a woman on her cheek and a man hugs a woman passionately; blurred female nudity from a distance as a woman takes a shower, women in bras and panties getting dressed in locker room, and upper male nudity of men at swimming pool; some alcohol use as people in a military propaganda unit drink and share farewells; man puts cigarette in his mouth but removes it; and, stealing, lying, death of parents, bullying, slander of man by woman’s false testimony, images of communist dancers waving rifles as they dance, and one woman has a mental breakdown.

YOUTH is a Chinese drama that follows the personal stories of a young woman and a young man, who perform with a propaganda troupe in the People’s Liberation Army (PLA) in the early 1970s, then are transferred to the front lines of the 1979 war between Communist China and Communist Vietnam. The movie focuses on personal relationships rather than politics, but still reflects the politically correct, communist background in which it takes place.

As the movie opens, Xiaoping is new to the performance troupe in the PLA. She’s the “runt of the litter,” an understudy for the main dancers in the troupe. She’s endured a life of bullying and feeling unloved living at home, which continues to be her experience as part of the troupe. She doesn’t fit, but eventually accepts her place as the costume and props organizer.

The other central character in YOUTH is Liu Feng. Feng is respected for his skill, leadership, kindness, and virtue. He falls in love with Dingding, one of the main performers of the art troupe, but his love is unrequited. Once Feng passionately professes his love, it tears apart the friendship with the very one he loves.

As time passes, the war finally ends, and everyone goes their separate ways. Eventually, some of the troupe members reunite in the early 1990s, some have found peace and contentment, but others flaunt their newfound capitalist wealth.

Well photographed and edited, YOUTH has several layers to it. Themes of unrequited love, sacrifice, humility, and honor are contrasted with pride and privilege. Much of the central story centers on the virtues and vices among the young adults, who are proud to be part of the communist military troupe. The art troupe performs and lifts the morale of the soldiers, evoking a sense of national pride. The movie also depicts the harsh realities of war, however.

YOUTH avoids getting too heavily involved in the politics at the time of its story. For example, it doesn’t deal with the controversies and oppression in China’s Cultural Revolution at all. Instead, it focuses on the personal interactions between the members of the military performance troupe. That said, there are still scenes of Chinese propaganda dancers waving and marching with fake rifles. The movie also doesn’t seem to like China’s new focus on capitalist economics. Finally, by focusing on an antiwar message regarding the 1979 war between Vietnam and China, YOUTH does end up romanticizing the Cultural Revolution.