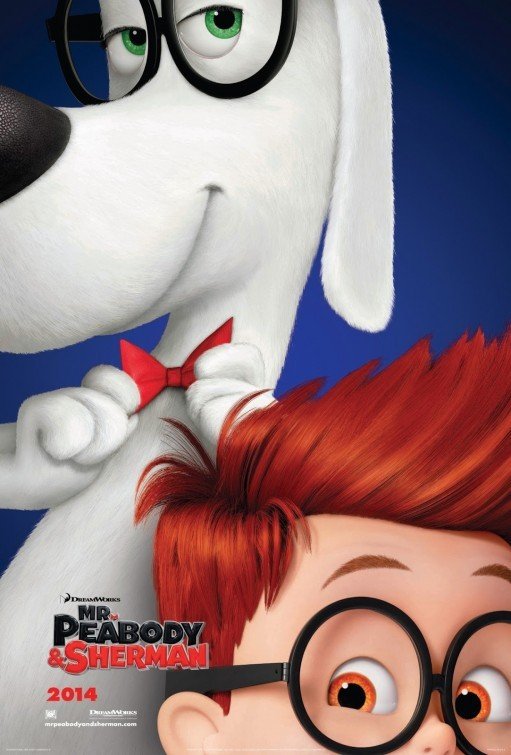 MR. PEABODY AND SHERMAN is a fun animated comedy. It’s about a genius dog with an adopted boy named Sherman. Mr. Peabody has invented a time machine to teach Sherman about history. Sherman goes to school and gets into an argument with a little girl named Penny about an historical point. Penny questions how Sherman knows this. This leads Sherman into showing her the time machine. The two travel to Ancient Egypt and mess up history. Mr. Peabody, Sherman and Penny have to make multiple stops to set things right and get back home.

MR. PEABODY AND SHERMAN is an entertaining story based on a popular television program from the 1960s. This version is fun and will get children interested in history. The animation is excellent, but the storyline could have been more cohesive. Reducing the number of historical visits would help. Though this is the case, MR. PEABODY AND SHERMAN is exciting, funny and has positive redemptive, moral messages about family and against paganism and against tyranny. There is some brief scatological humor, however. So, MOVIEGUIDE® advises caution for younger children.

(CC, BBB, ACAC, Pa, So, V, M) Strong Christian, moral worldview that keeps taking a stand against paganism and, in one sequence, also against a government social worker and against the new totalitarian government in the French Revolution that shows Robespierre as a real villain, but there is some pagan content presented, a socialist comment about redistributing wealth, including food; no foul language, but some scatological humor; light animated violence of falling from a cliff or sky but nothing graphic, child bites other child, sword fighting; no sex; no nudity; no alcohol use; no smoking or drug use; and, one child is a trouble maker and a bully but in the end gets along, plus references to Gandhi and yoga.

Mr. Peabody is a genius dog who’s adopted a little boy named Sherman. Sherman was just left in an alleyway in a box, and Peabody found him there. After adopting Sherman, Peabody made a machine that could take them back in to time, called the Wabac Machine. Mr. Peabody takes Sherman on historical adventures to learn about history.

One day though, Sherman has to go on his own adventure, his first day of school. It doesn’t take long for a bully to pick on Sherman, a little girl named Penny who feels threatened by Sherman’s intelligence. Sherman ends up biting Penny on the arm. The principle calls Mr. Peabody into his office. A social service worker, Mrs. Grunion, comes in to say that, if Sherman acts up again, she will take him away from Mr. Peabody.

In order to bring peace between the two families, Mr. Peabody invites Penny’s family over for dinner. Penny and Sherman go to his room. Sherman gets in an argument with Penny and takes her to the Wabac Machine to prove his point. This is the one thing Mr. Peabody has asked Sherman not to do, but Penny convinces Sherman to take them to Ancient Egypt in the time machine.

In Egypt, Penny is smitten by young King Tut, who wants to marry her. What Penny doesn’t know is that, in history, King Tut dies very young, and she would be mummified with his body. So, Mr. Peabody and Sherman must save Penny. The Wabac can’t make the trip completely back home, however, and they stop in the Italian Renaissance in Florence Italy to get Leonardo da Vinci’s help.

Then, the group has another issue with the Wabac Machine. They almost get sucked into a black hole, but then get stuck in the Trojan War. The adventure continues, but will Sherman, Mr. Peabody, and Penny ever get back home?

MR. PEABODY AND SHERMAN is a fun movie but could be better. A great element is that the movie imparts history in a new way to children. Children will get inspired to learn more and hear more about what occurred in history because the movie presents the stories in such a fun way. The movie could have used only one or two historical stories instead of so many, to make the story more cohesive. The animation is excellent and fun otherwise.

MR. PEABODY AND SHERMAN has a strong Christian, moral worldview that attacks paganism throughout the story. Still, some light pagan references are necessary in order to share this message. The movie does show the evil tyranny of the French Revolution. Also, the government social worker is the villain, so the movie has a strong message against big government. On the other hand, a line of dialogue says the French monarchy should have shared the wealth, including the food.

The movie’s story is mostly about family, not politics, however. Mr. Peabody and Sherman are trying to relate as a family and grow. Sherman loves Mr. Peabody and the two are a good representation of a positive father-son relationship. The character of Penny is a bit of a troublemaker who makes Sherman disobey. Eventually, however, she learns her lesson.