"Reliving the Days of Youth" 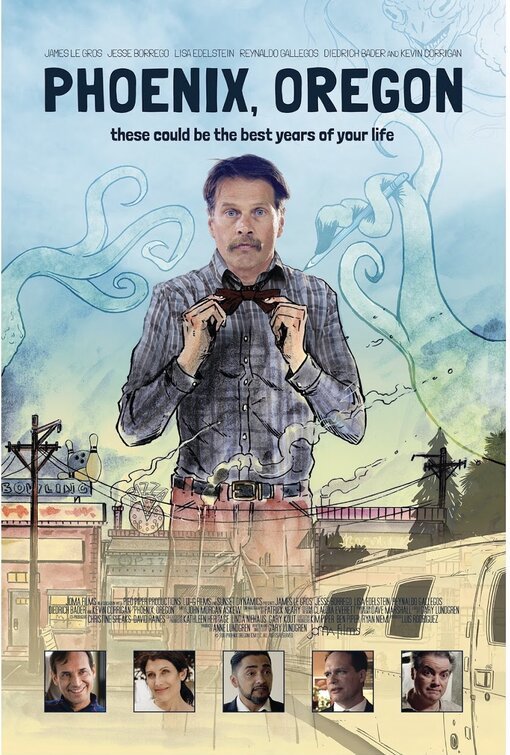 PHOENIX, OREGON is a comedy about a bartender named Bobby, who dreams of becoming a professional comic book artist. Unhappy with his life, Bobby and his friend, Carlos, use Bobby’s inheritance to open up a bowling alley serving alcohol and pizza. Ready to relive the good old days when he made a name for himself as a fabulous bowler, Bobby quickly realizes opening a business is harder than he thought. Bobby must decide if owning a business is worth all of the problems.

PHOENIX, OREGON promotes the Romantic theme that people going nowhere in life should chase their dreams whatever the cost. Viewers who have ever felt stuck in life will relate to Bobby’s story and want him to succeed. For a comedy, PHOENIX, OREGON isn’t very funny, though it places its story in a capitalist context of starting a new business. A weird part of the movie, however, is Bobby’s belief that aliens rule the world and control our every move. PHOENIX, OREGON is also marred by R-rated foul language and an implied sex scene. So, MOVIEGUIDE® advises extreme caution.

(RoRo, CapCap, B, H, FR, LL, V, S, A, D, M):
Dominant Worldview and Other Worldview Content/Elements:
Strong Romantic worldview of chasing your dreams no matter the cost, but in a strong capitalist context (two men learn that starting a business can be fulfilling but is harder to do than they imagined), with some humanist elements of living for yourself and doing what makes you happy and main character believe aliens are ruling the world and influencing our choices
Foul Language:
22 obscenities (including some “f” words) and two profanities
Violence:
Brief violence includes a person hitting himself in the head with a bowling pin
Sex:
A scene of implied fornication
Nudity:
No nudity
Alcohol Use:
Some alcohol use
Smoking and/or Drug Use and Abuse:
Brief smoking but no drugs; and,
Miscellaneous Immorality:
Lying, restaurant owner in financial trouble takes the tips of his employees, grouchy maintenance man over-charges for his work.

PHOENIX, OREGON stars James LeGros as Bobby, who believes life isn’t fun when you’re getting older. He goes to work as a bartender of an Italian restaurant and is sick of his life as he watches the girl he’s in love with come to the restaurant with another man and his stingy boss cuts corners just to save a buck.

Bobby’s buddy, Carlos, convinces him to use the money he received as an inheritance to buy a local bowling alley so Bobby can relive their youth as the town’s best bowler and Carlos can make pizzas. Seeking a third investor, they ask Mario Bentley, Jr., a new venture capitalist in town. With Bobby’s history as one of the best bowlers in town and Carlos’s expertise at making pizza from fresh dough, they can’t lose, right? They both soon realize opening a business is more expensive and time consuming than they both thought.

Bleeding money and fighting with the sleazy maintenance man who charges them double to fix the bowling lanes, Bobby and Carlos second guess whether this was a good idea. However, things start to look up when the third investor’s money arrives and a newspaper writes an article about Carlos’ artisan pizza. They start to believe they might make it after all.

Phoenix, a small town in southern Oregon, lays the foundation for the movie’s overarching Romantic theme that people who are going nowhere in life should chase their dreams despite the cost. Many camera shots focus on the small trailer that Bobby’s mother left him. This, along with wide shots of small town mom and pop shops, give the movie the feel of small-town life. Bobby wants to be a comic book artist but knows he needs to support himself. So, he decides to recreate the good old days when he was the best bowler, bowling a perfect score.

Audiences will relate to the idea of reclaiming youth in the wake of getting older. For a comedy, however, PHOENIX, OREGON isn’t very funny. Media-wise viewers probably will find it tragic that all Bobby and his friends want to do is relive the prime years of their lives drinking, eating pizza and reliving their youth. There’s a Romantic element to this part of the movie’s story. That said, the movie places this element in a capitalist context of starting a new business. Bobby and Carlos learn that starting a business can be fulfilling but is harder to do than they imagined.

A weird part of the movie, however, is Bobby’s belief that aliens rule the world and control our every move. This is reiterated several times during the movie. This idea of aliens controlling our destinies feels as though aliens have replaced God, since God is never mentioned in the movie.

PHOENIX, OREGON is also marred by some R-rated foul language and an implied sex scene. Otherwise, however, it’s not abundantly offensive. Even so, MOVIEGUIDE® advises extreme caution.