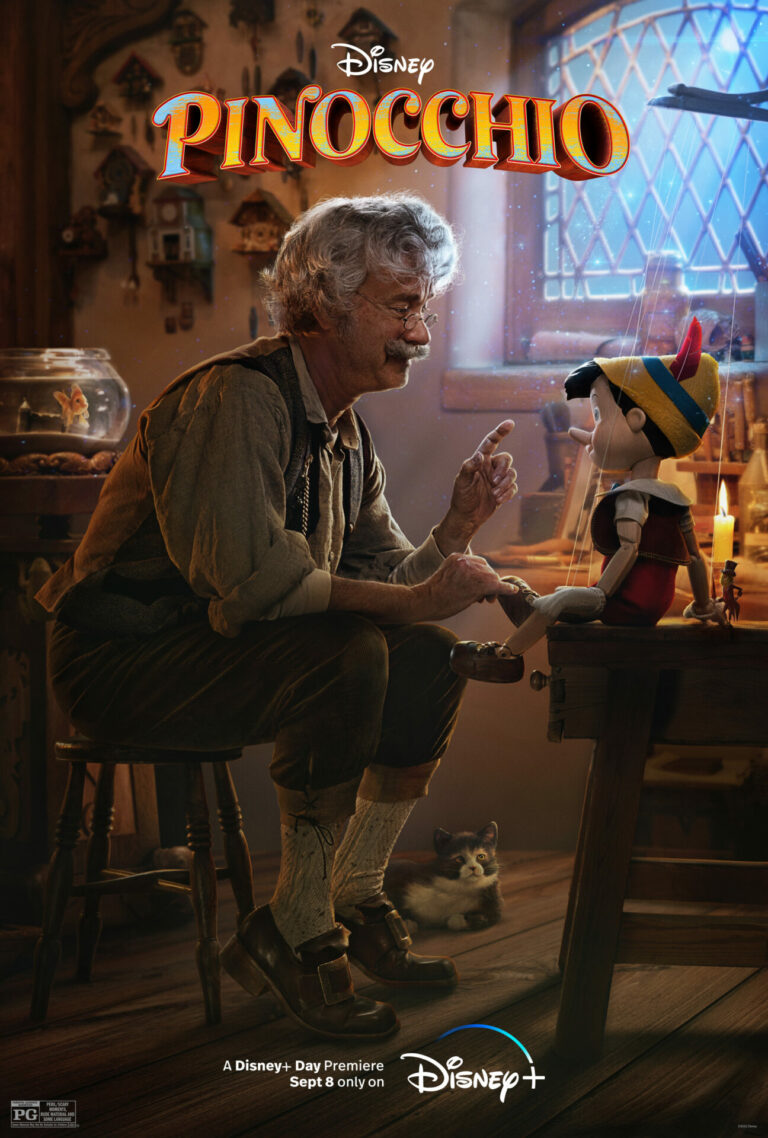 PINOCCHIO is a live-action remake of Disney’s classic 1940 animated cartoon musical about a living puppet who must prove himself morally worthy to be a real boy. The movie follows the outline of the original comedy fantasy. Geppetto, the clock maker wishes that his wooden puppet was a real boy. The Blue Fairy turns Pinocchio into a living, talking puppet and appoints Jiminy Cricket to be Pinocchio’s conscience. Then, Pinocchio proceeds to get into all kinds of trouble by giving into temptation.

Streaming on Disney Plus, this new live action PINOCCHIO is well produced and entertaining, with a nice performance by Tom Hanks as the puppet-maker, Geppetto. However, the story and plot lack the charm, details, humor, and power of the original animated movie. Also, the new PINOCCHIO dilutes the original movie’s redemptive ending and other parts of the story to conform to today’s woke, post-modern, politically correct, transgender sensibilities. It does, however, stress truth, honesty, bravery, caring for others, being unselfish, and doing the right thing. Disney’s versions of PINOCCHIO, though, insert false messages supporting magical thinking and ideas about Fate.

(B, PCPC, Ho, FRFR, V, AA, MM):
Dominant Worldview and Other Worldview Content/Elements:
Light moral worldview stresses truth, honesty, bravery, caring for others, being unselfish, and doing the right thing, but it’s marred and diminished by woke, post-modern, politically correct, deceitful, leftist, transgender sensibilities and a broken promise (the ending implies, for example, that a child can just declare themselves to be a real boy, even if the facts prove otherwise), plus the movie, which is a live action remake, adopts the original story and movie’s false magical thinking philosophy about “Fate” guiding one’s life and making wishes on a star that can come true
Foul Language:
No foul language, but there’s a gratuitous crude scene where the title character falls down in the street next to some horse dung
Violence:
Relatively light slapstick violence and sometimes scary action violence includes pratfalls, characters being hit, characters are trapped in the belly of a giant sea monster (the whale in the original story becomes a whale-looking sea monster for politically correct reasons)
Sex:
No sex
Nudity:
No nudity
Alcohol Use:
An image of a drunken toy appears briefly at one and rebellious boys drink root beer, which turns them into donkeys to be sold to salt mines to work as slaves
Smoking and/or Drug Use and Abuse:
No smoking or drugs; and,
Miscellaneous Immorality:
Title character is sometimes fooled by dishonesty, tall tales and fame, but he starts to grow a conscience that helps him to do the right thing, plus the Blue Fairy breaks her promise to Pinocchio and a school teacher says Pinocchio can’t attend school because he’s not a “real boy,” which seems to be another politically correct, transgender message, this time against conservatives and parents who don’t want government teachers to teach transgender politics to schoolchildren.

PINOCCHIO is a live-action remake of Disney’s classic 1940 animated cartoon musical about a living puppet who must prove himself morally worthy to be a real boy. Streaming on Disney+, this new live action PINOCCHIO is well produced and entertaining, with a nice performance by Tom Hanks as the puppet-maker, Geppetto, but it lacks the charm, humor and power of the original and dilutes the original movie’s redemptive ending and other parts of the story to conform to today’s woke, post-modern, politically correct sensibilities.

The live action version opens similarly to the original cartoon, with Jiminy Cricket narrating the story. Years ago, Jiminy Cricket was a vagabond who traveled from home to home trying to find shelter.

One cold night, he arrives in a small Italian village. No one is around and the only light is a light coming from the local, widowed clock maker, Geppetto. The fire inside is warm and inviting. So, Jiminy Cricket slips under the door, where he finds Geppetto putting the finishing touches on a wooden puppet of a little boy. The puppet matches a portrait of Geppetto’s dead son.

Before going to bed, Geppetto opens the bedroom window and sees the wishing star high in the sky. He wishes upon the star that Pinocchio would become a real, live boy.

After Geppetto, his cat Figaro and his goldfish Cleo fall asleep, the Blue Fairy flies into the house and sings, “When You Wish Upon a Star.” She then uses her magic wand to make Pinocchio a talking, living puppet. She also appoints Jiminy Cricket to be Pinocchio’s conscience and promises Pinocchio he will become a real boy if he is truthful, brave and unselfish.

However, when Pinocchio tries to go to school, he’s waylaid by a crafty red fox named Honest John. Honest John convinces Pinocchio to achieve success and fame by becoming an actor instead of going to school like his father told him to do.

This leads to all sorts of bad situations for Pinocchio. Meanwhile, Geppetto goes looking for him.

Disney’s original animated comedy fantasy, PINOCCHIO, contains wishful thinking and mentions of Fate guiding one’s life and wishing upon a star. This problem is rescued by the movie’s morally uplifting discussions of doing the right thing, learning to tell the difference between right and wrong, love, honesty, bravery, and acting unselfishly. It’s also rescued by the movie’s striking, emotionally powerful redemptive climax, which contains a theme of death, resurrection, reward, and transformation.

This live-action remake contains the parts about Fate and wishing upon a star. It also stresses truth, honesty, bravery, caring for others, being unselfish, and doing the right thing. However, it changes and thus weakens the story’s redemptive ending. Sadly, because of this, Disney’s live action PINOCCHIO has no theme of death, resurrection and reward, though it does have a theme of transformation. The transformation here, however, is weakened and lacks the wonderful power of the original movie’s ending.

That said, this live action PINOCCHIO movie is well produced and entertaining, up to a point. It has some comedy, adventure and jeopardy. However, the story and plot itself lack the charm, details, humor, and power of the original animated movie. For example, the detailed bits of comedy in the first half hour of remake pale in comparison to the wonderfully edited bits of comedy in the original. Also, the songs in the remake seem over-produced and not as enjoyable. Finally, the remake has an unnecessary, distasteful joke about horse dung.

Ultimately, this PINOCCHIO diminishes the original story by inserting woke, post-modern, politically correct, deceitful, leftist, transgender sensibilities and a broken promise. For example, the Blue Fairy breaks her promise to turn Pinocchio into a real boy. Also, the ending strongly implies that a child can just declare themselves to be a real boy, even if the facts prove otherwise. By eliminating a real death, resurrection and transformation, this PINOCCHIO just wastes the viewer’s time.