PIRATES OF THE CARIBBEAN: DEAD MEN TELL NO TALES

"Family Is the Greatest Treasure" 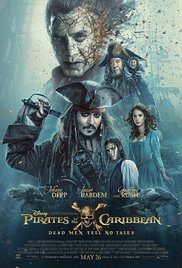 PIRATES OF THE CARIBBEAN: DEAD MEN TELL NO TALES changes things up in the franchise. It also provides a poignant resolution to the third movie’s bittersweet ending. Will Turner’s son, Henry, is trying to find Poseidon’s trident to free his father from the curse of the Flying Dutchman. He gets help from a down-on-his-luck Captain Jack Sparrow and a beautiful female astronomer, Carina, who has a book that might have astronomical clues to the trident’s location. However, Jack’s being pursued by an old nemesis, the angry ghost zombie of a Spanish captain who hates pirates.

Despite its scary villains, PIRATES OF THE CARIBBEAN: DEAD MEN TELL NO TALES is an exciting, funny and redemptive fantasy adventure. It has lots of heart, especially during its wonderful climax. The movie is superbly structured and tightly directed. Best of all, it has a strong Christian, moral worldview with a positive pro-family theme about fathers and children. DEAD MEN TELL NO TALES is a satisfying fantasy adventure, but caution is advised for the scary villains, intense violence, some off-color jokes, the piracy theme, and some drunkenness.

Worldview: Strong Christian, moral worldview extolling family, the importance of fathers, sacrifice and doing the right thing for one’s family, while condemning merciless revenge and uncontrollable rage, with references to breaking curses and to the Greek god Poseidon and his trident, but the ending shows curses and paganism finally being broken through sacrifice, plus some occult elements include woman is falsely accused of witchcraft, but she’s just a smart astronomer/scientist, although another woman is a witch and evil, and a villainous captain and his men become undead ghost zombies because of a curse involving the Bermuda Triangle or the Devil’s Triangle, and there’s some proto-feminism about strong women defying social conventions. Language: One “piss off” obscenity and one light OMG profanity.
Violence:
Lots of intense and scary fantasy violence includes a Spanish captain shows no mercy toward the surviving pirates he conquers, explosion rips apart Spanish captain’s ship and turns him and his men into scary mutilated ghosts, pirates rob a bank’s safe but they try to drag the large safe, and they end up dragging the whole bank building through the streets of an island city, other explosions occur, lots of sword fighting with people dying, anti-hero’s about to be decapitated by a guillotine, and he looks in the basket below the guillotine and sees decapitated heads in it, woman is about to be hanged falsely for being a witch, scary shark ghosts are partly eaten away by explosion above and they chase after people in a rowboat, people tied up and threatened, villain orders several executions, etc..
Sex:
A couple light off-color jokes about sex, such as anti-hero complains to heroic young man that a woman taking off her dress down to her elaborate underwear to swim for safety didn’t take off the rest of her clothes, and it’s implied that anti-hero had a rendezvous with a government official’s wife, but it’s not indicated how far they went.
Nudity:
Brief upper male nudity, and woman strips down to her elaborate Victorian, full body underwear to swim for safety; alcohol use and drunkenness.
Other Content:
No smoking or drugs; and, piracy, attempted bank robbery, but it fails in comical, ironic fashion, villain is on a revenge mission, villain shows no mercy, pirates double-cross one another.

PIRATES OF THE CARIBBEAN: DEAD MEN TELL NO TALES changes things up a bit by showing Henry, the son of Will and Elizabeth, trying to free his father from the curse of the Flying Dutchman and getting help from a female scientist trying to honor her own father, while a cursed Spanish captain hunts down Jack Sparrow for revenge. Though it still has plenty of scares, DEAD MEN TELL NO TALES is the most family-friendly PIRATES movie yet and tells an exciting, redemptive story full of comedy, adventure and heart.

The movie opens with the young son of Will Turner, Henry, finding a clue to free his father from the curse of the Flying Dutchman. The curse condemns Will to a life of ferrying the souls of the dead, living apart from his son and his wife, Elizabeth. Henry thinks Poseidon’s trident, which holds power over the seas, can break the curse, but Will tells Henry it’s impossible to break the curse. He advises his son to forget about him, but Henry doesn’t give up trying.

Years later, Henry is searching for Capt. Jack Sparrow to get help in finding the trident, but he ends up in the Devil’s Triangle, where the ghost zombie of a Spanish captain named Salazar and his crew are trapped. Capt. Salazar is an old nemesis of Sparrow, and he tells young Henry to give a message of revenge for Capt. Sparrow.

Henry ends up on the island of St. Martin, where Jack is trying to rob a bank. Also on the island is a beautiful young female astronomer named Carina. Carina has a book written by Galileo. The book, which she inherited from her long-lost father, might contain astronomical clues to the whereabouts of a mysterious island where Poseidon’s tomb and trident reside. Carina thinks that following the clues will also lead her to clues about her father’s whereabouts.

Meanwhile, when Jack’s attempt to rob the bank fails and all his men desert him, Jack decides to give up the magical compass that led him to whatever his heart desired at the moment. He also gets drunk and ends up being captured by the island’s officials, who sentence Jack to be executed. They’ve also sentenced Carina to hang, having been falsely accused of being a witch.

Eventually, in an exciting and funny sequence, Henry and Jack’s men help Jack and Carina to escape the gallows. Though skeptical about Carina’s claims regarding her book, they all decide to follow the clues in the book leading to Poseidon’s trident. Jack hopes finding the trident will lead him to much treasure, Carina thinks it will help her find her father, and Henry thinks it will help break his father’s curse.

What they don’t know, however, is that, by giving his magical compass away, Jack has freed Capt. Salazar and his ship from the Devil’s Triangle. They soon learn, however, that Salazar has been hunting down all pirate ships to find Jack Sparrow and exact his revenge. Also, Jack‘s other nemesis, Capt. Barbossa, has made a deadly pact with Salazar to help Salazar find Jack.

All these characters are on a giant collision course, but who will survive? And, can Henry’s father be freed from the curse of the Flying Dutchman?

PIRATES OF THE CARIBBEAN: DEAD MEN TELL NO TALES is an exciting, funny and redemptive fantasy adventure. It also has a lot of heart, especially during its wonderful climax. The movie is superbly written by Jeff Nathanson and tightly directed by the two Danish directors who did the documentary KON-TIKI. All the actors do a good job, including Johnny Depp, who seems to have been faltering a little bit of later, perhaps because of some personal problems. Depp has never been funnier as Capt. Jack Sparrow, whose character has seen a lot of trials and tribulations as this movie opens. He’s so down on his luck that it’s driven him to drink even more heavily. Javier Bardem is truly menacing as the evil Capt. Salazar, who’s full of rage against Jack. That said, the best performance belongs to Geoffrey Rush as Capt. Barbossa, who has the movie’s most moving character arc.

Despite the scary Spanish captain and his men, PIRATES OF THE CARIBBEAN: DEAD MEN TELL NO TALES is the most family-friendly PIRATES movie yet. In fact, the movie’s main theme is about parents and children. Thus, Henry wants to find a way to free his father from the curse of the Flying Dutchman, and Carina wants to confirm her father’s theory about Poseidon’s trident. This theme leads to one of the most moving endings MOVIEGUIDE® has seen in a while. It’s also a redemptive theme because it involves some sacrifice on part of both the children and the fathers. In the end, family is the greatest treasure.

Although Henry says all the myths of the sea are true, the movie shows the breaking of all the curses, including some pagan curses, under which the characters are suffering. Breaking the curses brings reconciliation, reunion and redemption, and Capt. Jack Sparrow gets his mojo (and his ship, the Black Pearl) back.

DEAD MEN TELL NO TALES has a strong Christian, moral worldview, but caution is advised for the movie’s scary villains, intense violence, a few off-color jokes, the piracy theme, and some drunkenness.

Watch PIRATES OF THE CARIBBEAN: DEAD MEN TELL NO TALES: