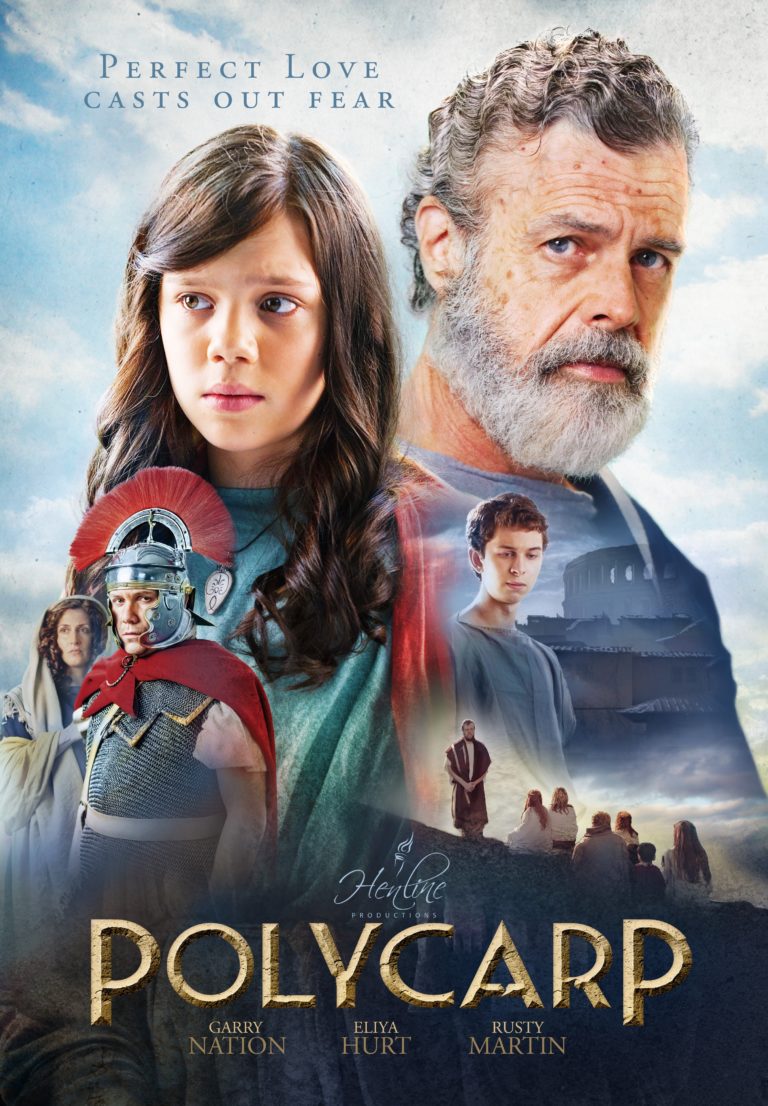 POLYCARP is a gripping drama about Polycarp, the aged Christian Bishop of Smyrna in the Second Century, who befriends a young slave girl and brings her to faith during a time of conflict with the Roman Empire. Christians in Smyrna rescue and adopt Anna, a young slave girl. Polycarp befriends Anna and starts teaching her about the Gospel of Jesus Christ. However, Anna struggles to reconcile her beliefs with those of the Christians. When the Roman Proconsul demands all citizens worship Caesar to show their allegiance to Rome, Polycarp and the Christians in Smyrna must find courage to stand for their faith against persecution. Anna is forced to come to grips with the Truth and choose whom she is willing to live for, and die for.

Polycarp is a gripping, compelling and stirring presentation of the power of the Gospel to transform lives. It is a powerful illustration that perfect love drives out fear. Inspiring and triumphant, with a magnificent musical score, it’s a family-friendly movie that can be screened to any church, Sunday school, youth group, or camp, without any reservations.

(CCC, BBB, Pa, V) Very strong Christian, biblical, moral worldview with clear, powerful presentations of the Gospel, compelling conversations, inspiring examples of self-sacrifice, heart-rending situations and boldness in the face of peer pressure, family pressure and state persecution; no foul language; some restrained violence including violence in the arena and burning of Polycarp at the stake; and, nothing else objectionable.

This inspiring film is based on the true story, and historical accounts, of the lives of Polycarp, Germanicus and Irenaeus. It’s seen through the eyes of Anna, a young slave girl who is redeemed by a community of Christians, in second century Smyrna.

The movie begins with gladiatorial sports in the arena. Christians are being dragged out of dungeons and led into the arena. As a young girl is left distraught in the dungeon as her mother is wrenched away from her by Roman soldiers, a woman seeks to comfort her by relating what happened eight years earlier in a slave market of Smyrna.

People are shown burning incense before an image of Caesar and declaring, “Caesar is lord.” Tremendous pressure is brought to bear on individuals to participate in this idolatrous statism. When Polycarp is threatened by a centurion to persuade the people, he responds, “I will persuade them to worship the one true God and to worship Him alone!”

Anna doesn’t understand how God can love us. Polycarp explains how he had been a slave, and he had been purchased and set free by a Christian. He had the privilege of studying under the Apostle John. “If it were not for God’s love, I would not be here, and neither would you.”

Germanicus resists pressure to burn incense before a statue of Caesar. “We must honor Caesar,” he says, “but not worship him.” The proconsul declares, “There is no one more powerful on earth than Caesar!”

One parent declares: “There are no traitors in my house,” and he compels his Christian son to burn incense and declare that Caesar is lord. “In Rome, they are crucifying these types,” the parent says, “or feeding them to the lions. Perhaps, we should do the same.”

Polycarp responds to warnings that they intend to kill him. “If that is true,” he says. “I shall receive a great honor: to share in the sufferings of Christ.” Anna is horrified and confused by Polycarp’s attitude.

Germanicus is ashamed when he ran away from the intimidation to worship Caesar. Ashamed, he declares, “I don’t deserve His grace!” However, Polycarp replies, “None of us do. That is why it is grace.”

When Germanicus is arrested for “high treason” and “blasphemy against the gods,” Anna is distraught. “I don’t see God’s love in this!” she declares. Polycarp tells her, “We are not ready to live until we are ready to die.”

When the persecution escalates, Polycarp and Anna flee from the city. A reward is offered for Polycarp’s capture. He chooses to return and declares: “It is time for me to make my stand.” The Proconsul accuses Polycarp of being an atheist and “a destroyer of our gods!”

Polycarp is a gripping, compelling and stirring presentation of the power of the Gospel to transform lives. It is a powerful illustration that perfect love drives out fear. Inspiring and triumphant, with a magnificent musical score, it is a family-friendly movie that can be screened to any church, Sunday school, youth group, or camp, without any reservations.