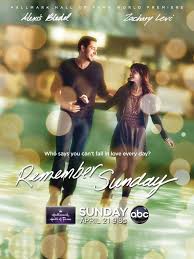 REMEMBER SUNDAY is one of the best television movies in terms of excitement and jeopardy. Gus is a brilliant guy who’s had an aneurism that’s changed his life. Now, Gus must use methods to remind him daily of who he is and what has happened the days before. When Gus meets Molly, the two connect. However, Molly doesn’t know Gus has short-term memory loss. Crises occur that threaten to tear them apart. Gus he forgets dates, things go wrong and Molly thinks he’s just another cad. However, Gus is such a great guy that the audience roots for him. Will the two learn how to sacrifice to stay together?

REMEMBER SUNDAY is another great Hallmark film. Like the Movieguide® Award winner, A SMILE AS BIG AS THE MOON, it’s about a person trying to deal with an extremely difficult mental problem. It has a strong message of answered prayer, sacrifice and love transcending romantic notions of what love should be. The acting in REMEMBER SUNDAY is terrific. The crises provide great jeopardy. REMEMBER SUNDAY is one of the great movies from Hallmark.

(CC, Ro, BBB, L, M) Strong Christian worldview overcomes Romantic notions, with many strong moral messages about honestly, loyalty, forgiveness, perseverance, grace, with one reference to bad luck, and prayer and appeals to God; one light obscenity; threats of violence but nothing overt; no sex but some kissing; no nudity; no drinking; no smoking, no drinking; and, cynicism, false accusations, prejudice.

REMEMBER SUNDAY is one of the best television movies ever produced in terms of excitement and jeopardy. Well produced in every detail, the movie tells the story of a young man who has had an aneurism and can’t remember anything once he goes to sleep. This young man, Gus, was a brilliant astrophysicist who had solved one of the great astrophysics problems of the universe.

One day Gus is supposed to meet his best friend at a New Orleans restaurant, near where he lives. At the restaurant, Molly waits on him. Molly’s life is like his: it’s been on hold. She’s waiting for the right guy. She’s also waiting to start a flower business while she waits for an inheritance from her aunt.

Molly and Gus both hit it off. Molly finds his pen and leaves him a message. Molly doesn’t realize that Gus has short-term memory lapse, because he’s so good at compensating with the help of his sister Lucy.

Gus starts to date Molly. Of course, there are crises, he forgets dates, things go wrong, she thinks he’s another cad, her cynical roommate thinks he’s worse then a cad. However, Gus is such a great guy that the audience is wholeheartedly rooting for him.

REMEMBER SUNDAY is another great Hallmark movie. Like the Movieguide® Award winner, A SMILE AS BIG AS THE MOON, it’s about a person trying to deal with an extremely difficult mental problem. It has a message of answered prayer, sacrifice and love transcending romantic notions of what love should be. The acting is terrific. Both of the main characters are lovable. The crises provide a lot of jeopardy.

REMEMBER SUNDAY is one of Hallmark Hall of Fame’s best movies. It’s highly recommended by Movieguide®.