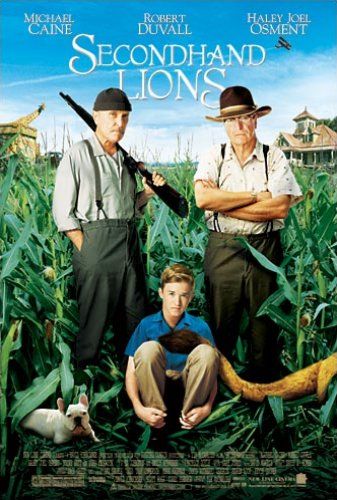 SECONDHAND LIONS, set mostly in the 1950s, stars Haley Joel Osment, Michael Caine, and Robert Duvall in a story about a young boy left in the care of his two irascible, cantankerous great-uncles. With help from his talented cast, writer and director Tim McCanlies has crafted a heartwarming, exciting, humorous, and ultimately uplifting tale for older children, teenagers, and adults, but the movie contains many light obscenities and a Romantic element.

SECONDHAND LIONS is a magical family movie for older children, teenagers and adults of all ages. It’s a whimsical character study full of adventures, comedy, and spirited fun.

The story of SECONDHAND LIONS opens with two men in an old-fashioned biplane buzzing a sleepy highway patrolman sitting in his car under a freeway overpass. Flash back to the 1950s where an introverted young boy named Walter and his wandering mother, Mae, are riding a rural Texas road. Mae drops Walter off to spend the summer with his two irascible great uncles, Garth and Hub, on their remote ranch in Texas. Mae tells Walter that Garth and Hub disappeared for years and were placed in a mental hospital, but have lots of money stashed away somewhere on their ranch due to a successful lawsuit against the hospital. Despite the news about the money, Walter is still noticeably upset. He clearly does not know what to make of the two cranky old men, who frighten salesmen off with powerful retorts from their menacing shotguns.

Left to their own devices, the mismatched threesome begin to form an unlikely bond. Walter finds a mysterious trunk upstairs with an old photo of a beautiful woman. When he discovers Hub walking in his sleep and fighting with imaginary foes, he asks Garth to tell him their story. Garth begins to weave an exciting tale of adventure about being dragooned by the French Foreign Legion during World War I and about a beautiful princess in North Africa, Jasmine, who falls in love with Hub. In between flashbacks from Garth’s stories, Walter, Hub, and Garth share a series of comical adventures of their own, adventures with salesmen, an elderly lioness, and several juvenile delinquents who challenge Hub to a fight.

Haley Joel Osment stars in SECONDHAND LIONS as Walter, the young boy who finds a new family. Michael Caine and Robert Duvall star as Garth and Hub, respectively. Garth is the more introverted of the two uncles, like an elderly version of Walter, while Hub is the true adventurer, who battles German soldiers, slave traders, dangerous Arab sheiks, and young juvenile delinquents at the drop of a hat. Watching these three actors interact and being transported back in time to Garth and Hub’s adventures in North Africa is pure delight.

There are plenty of light obscenities in SECONDHAND LIONS, however, mostly from the two cantankerous great-uncles. Also, during an inspiring speech by Hub about duty, honor, true love, and trust, Hub says you also have to believe that people are basically good. He says you have to believe all of these things even when you have little or no reason to think that they are true. Acting on such values will help you endure and overcome trials in your life, Hub suggests.

The idea that people are basically good is a Rousseauian Romantic, liberal notion that contradicts biblical truth and reality. Parents, educators, philosophers, and theologians need to remind people, especially children and teenagers, that, as the Bible teaches and history shows, human beings are inherently sinful. To quote Genesis 8:21, “The intention of man’s heart is evil from his youth.” If this were not so, then the terrible death of Jesus Christ on the Cross for our sins would have been unnecessary, and the command of Jesus in Mark 1:15 to repent, or turn away from our sins, would not make any sense whatsoever.

SECONDHAND LIONS may have other light Romantic elements in that, in the story, it becomes clear that Garth and especially Hub stay young by always seeking adventure and excitement. Hub is a soldier of fortune who has led men into battle during several wars. Garth is the more sensible of the two men in that he tries to get Hub to settle down, mostly by forcing him to work in the garden, like a sensible, retired old gentleman.

The really good news about SECONDHAND LIONS is that writer and director Tim McCanlies, who adapted the script for IRON GIANT and made DANCER, TEXAS POP. 81, has crafted a charming, exciting, humorous, and ultimately uplifting tale for older children, teenagers, and adults. The dominant worldview in his movie is morally positive, with a light redemptive touch. In a poignant, important scene late in the movie, Walter admonishes Hub and Garth not to do anything really dangerous, because he needs them to be there for him while he’s growing up. The adventures that Walter shares with Hub and Garth, and the adventures he learns about from Garth, inspire Walter’s love, but the honor, compassion, goodness, and exuberant love for life which Garth and Hub display also inspire Walter.

On the whole, SECONDHAND LIONS will lighten and enrich the hearts and minds of all who see it. Its spirit leans in the right direction, even though it is not everything it could be if it had been made with a strong and explicit Christian, and/or biblical, worldview.