"Battling an Evil Ghost from the Past" 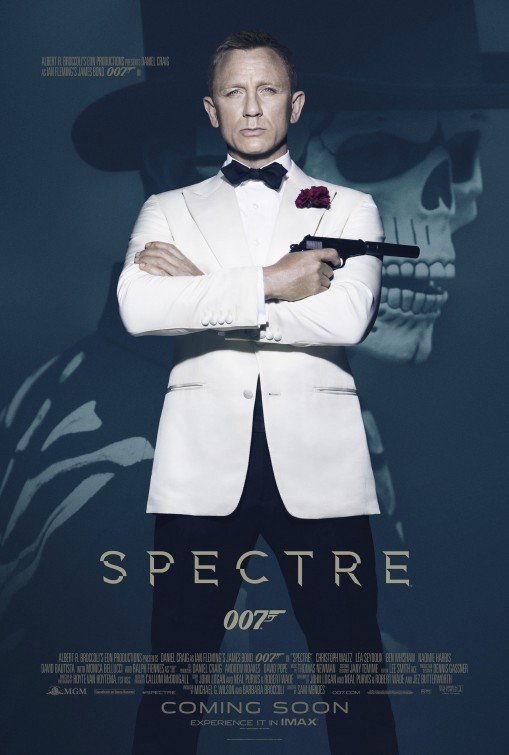 SPECTRE, the latest James Bond movie, finds Bond getting one last order from his previous boss, who died but left him a message. He’s ordered to kill a terrorist in Mexico City. Bond does so, but he doesn’t know whom to trust, so he refuses to tell the new M about his mission. M suspends Bond, who goes under the radar to investigate the criminal organization behind the dead terrorist, Spectre. Bond’s investigation leads him to Spectre’s founder, a man Bond knew when they were young. Bond must stop the man’s plan to co-opt a new international security apparatus.

SPECTRE isn’t as good as the last Bond movie, SKYFALL, which was one of the best Bond movies. SKYFALL is also the first Bond movie to earn one billion dollars worldwide. SPECTRE is still an exciting, crowd-pleasing movie. Even better, it continues some of SKYFALL’s Christian, patriotic themes and symbolism that made it such a success, artistically and financially. That said, SPECTRE’s positive qualities are mitigated by a couple implied bedroom scenes, intense violence and brief foul language. So, strong caution is advised.

(BB, PP, ACAC, CC, Pa, LL, VV, S, N, A) Strong moral, patriotic movie supporting national representative democracy against unelected international, statist organizations and terrorists using nefarious means to circumvent such democracy, with strong Christian, redemptive, biblical elements including Christian funeral with priests leading the procession, references to the All Saints Day, All Souls Day, and Day of the Dead celebrations in Mexico City (including a title card reading “the Dead are alive,” which becomes a symbolic theme applied to both the hero and the villain, plus a couple other characters), a biblical, archetypal reference to the “writing on the wall” incident in the Book of Daniel in the Bible, images of the Cross appear, and there are lines about moral choices and choosing when and when not to kill, plus, though hero saves two damsels in distress, but he also sleeps with them; seven or eight obscenities (a few “s” words and some “h” words), four strong profanities, and one light borderline exclamatory profanity (Good God!); strong and often intense action violence includes gun battles with people shot to death, explosions, intense hand-to-hand combat with people deliberately hit by objects during the fighting, villain tortures hero with long but thin needle/drill into side of his head and in his neck, another villain has steel contraptions on his thumb to help him poke out the eyes and kill another villain, and he is shown wiping the blood off his thumbs (but the actual gouging of the eyes isn’t fully shown), wall of building almost collapses on top of hero, fight in helicopter causes it to endanger lives of hundreds of people on the ground in huge Mexico City plaza who’re celebrating “the Day of the Dead,” man gets a vicious wound along left side of his face, terminally ill man commits suicide, and images of skeletons during “Day of the Dead” celebrations; two scenes of implied fornication after intense passionate kissing, plus another scene of passionate kissing; upper male nudity in one or two scenes, and woman sits on bed in lingerie after scene of implied fornication; alcohol use, but Bond admits he drinks too much; no smoking or drugs; and, no other or miscellaneous problems or issues.

SPECTRE, the latest James Bond movie, finds Bond getting one last order from his previous boss, which leads him to a secret criminal organization and its leader, who has a personal connection to Bond and a plan to take over the world’s security apparatus. It also leads Bond to the daughter of one of his past nemeses in the first two movies featuring Daniel Craig as James Bond.

The movie opens with Bond in Mexico City during “Day of the Dead” celebrations. A title on the screen says, “The dead are alive.” Bond is following a man who intends to plant a bomb in some stadium later that day. After an explosion, a chase and an elaborate fight in a helicopter endangering the crowd below, Bond manages to kill the man, the pilot and safely land the copter. Before killing the man, Bond takes a strange silver ring off him. The ring has an image of a black octopus on it.

Back in London, Bond’s new boss, M, expresses to Bond his dissatisfaction about Bond engaging in an unauthorized mission in Mexico City that caused an international incident. Bond refuses to say why he was in Mexico City, so M suspends him. M informs Bond that the Home Secretary (Britain’s version of America’s Secretary of State) is thinking about doing away with the Double-O Division. He’s also placing all the country’s security under the new head of a merger between MI5 and MI6, which will in turn be linked to an international security apparatus.

Later that night, Bond informs Moneypenny his previous dead boss, played by Judi Dench, sent him a recorded video mission before she died, telling Bond to kill the wannabe terrorist in Mexico City. Against orders, Bond travels to Rome to visit the terrorist’s widow. After saving the woman from two assassins, he seduces her. She tells him that the secret criminal organization will hunt her down and kill her, because she knows too much. Bond promises to protect her. He tells her to contact his friend in the CIA, Felix Leiter. In return, she tells him where in Rome the secret organization plans to meet. Bond infiltrates the meeting, but the organization’s mysterious head identifies Bond, and so he barely escapes.

As the plot thickens, so to speak, it turns out the new criminal organization is called Spectre. It also turns out that Spectre was really the group behind the villains in the previous three Bond movies. The organization’s headed by a man named Franz Oberhauser (played by Christoph Waltz), whom Bond and others thought died as a teenager in an avalanche with his father. Bond’s search for Oberhauser and Spectre’s headquarters leads him to Madeline Swann, the daughter of Mr. White. White is a former adversary who was secretly working for Spectre but left when Oberhauser revealed to him his evil plans, which included killing women and children in several international terrorist plots. Bond learns Spectre intends to take over the new international security apparatus, which will give Spectre almost unlimited power.

It’s now up to Bond, Madeline, M, Miss Moneypenny, and M’s quartermaster, Q, to put a stop to this evil plan to circumvent Britain’s representative government.

SPECTRE is not as good as the last Bond movie, SKYFALL, which has been justly acclaimed as one of the best Bond movies ever made and is the first Bond movie to earn more than $1 billion worldwide. Even so, SPECTRE is still an exciting, crowd-pleasing time at the movies. Even better, it continues some of the Christian, patriotic themes and symbolism that made SKYFALL such a success, both artistically and financially.

For instance, the movie supports national representative democracy against unelected international, statist organizations and terrorists. In the story, the villains use nefarious, criminal means to circumvent such democracy. M explicitly mentions this when he confronts the new head of the merger between MI5 and MI6, Britain’s version of the FBI and the CIA. Bond and his fellow heroes and heroines work against these villains. Bond also specifically promises to protect two women from Spectre, the organization behind the evil plot to control the world’s security apparatus, and he succeeds in doing so.

A major theme in SPECTRE is the idea that “the dead are alive.” In the last movie, Bond underwent a symbolic death, baptism and resurrection. Thus, this movie may be considered part of Bond’s sanctification process to become a better hero. He’s not just defeating evil, he’s also saving damsels in distress and making promises to protect them. In addition, as the ending reveals, Bond is learning when to kill and when not to kill. That’s another thing M mentions during his confrontation with the new security head. It can also be send as another biblical allusion, to Ecclesiastes 3:1-8. The theme that “the dead are alive” not only reflects Mexico’s unique celebration of the Christian holidays All Saints Day and All Souls Day. It also reflects the main villain’s history. The villain was believed to have died in the avalanche that also killed his father. In reality, it was he who caused the avalanche, to kill his own father. The reason he did that is the movie’s big secret and has a personal meaning for James Bond. The dead are alive indeed. In addition, it’s clear that the villain truly deserves to die for what he did and for the many other evil things he’s done.

All that said, Bond still has premarital sex with the women he meets, including the primary romantic interest, played by Lea Seydoux, who does a fine job as the new “Bond girl.” SPECTRE also contains strong, intense violence, including a scene where the villain tortures Bond with two thin, long needles that also act like drills. Finally, there’s some strong foul language. So, MOVIEGUIDE® advises strong caution for SPECTRE, the new Bond movie.