"Wonderfully Familiar and Fresh (With the Same False Worldview)" 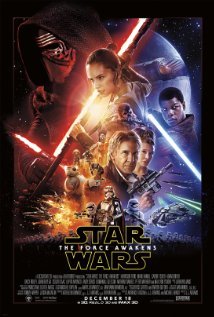 STAR WARS: THE FORCE AWAKENS combines old familiar faces with new ones. A new group of bad guys called the First Order is threatening the new republic. General Leia Organa has sent her best pilot to obtain a map revealing the whereabouts of her brother, Luke Skywalker, who disappeared years ago. The republic needs Luke to train new Jedi knights to save the galaxy. Han Solo and Chewbacca team up with a repentant storm trooper and a female scavenger to get the map to Leia and her resistance fighters.

STAR WARS: THE FORCE AWAKENS is the STAR WARS movie that fans and moviegoers have been longing to see. It’s exciting, emotional and well made, with standout performances by Harrison Ford and newcomer Daisy Ridley. It also has some strong moral content, redemptive moments and pro-family sentiments. However, the movie’s pagan, somewhat mixed worldview contains some New Age mysticism and a renewed, rather contradictory, monistic take on the Force and the morality behind it. So, MOVIEGUIDE® advises strong or extreme caution for THE FORCE AWAKENS. Parents please teach your children to be media wise.

(PaPaPa, FRFR, O, Ro, BB, C, ACAC, L, VV, A, M) Strong pagan, somewhat mixed, worldview with New Age monism regarding the impersonal and all-encompassing Force, (including confusing talk about restoring “balance” to the Force although it’s clear that the “good side” of the Force must overcome and perhaps even destroy the “dark side” of the Force), characters use the occult power of the Force to control minds and move objects and people without physically touching them, some pagan mysticism includes mystical visions, but mitigated by strong moral elements and some redemptive elements including strong anti-totalitarian message, villains try to control people and make them conform, but one character resists, doing the right thing is explicitly extolled, strong pro-family sentiments expressed, and sacrifice and repentance promoted; two “h” obscenities; strong, exciting action violence includes explosions, laser gunfights, lightsaber battles, people killed, spaceships flying about and chasing one another, fighting, character thrown against tree, characters wounded, large monsters attack people, brief images of blood, and character apparently has been beaten up, and villain tries to torture characters to talk; no sexual content, but some implied romance and hugs; no nudity; implied alcohol use; no smoking or drugs; and, brief lying but exposed and lead villain gets uncontrollably angry when things don’t go his way.

First, the good news. STAR WARS: THE FORCE AWAKENS is the best, most exciting, and best written, directed and acted STAR WARS movie since the first trilogy, probably since THE EMPIRE STRIKES BACK. It also has some strong moral content, redemptive moments and pro-family sentiments. However, although it only lags a couple brief moments during its 132 minutes, the movie sometimes could use a little bit better dialogue (especially during the second half) and a stronger, slightly more satisfying redemptive climax, which is always the key to making a really great movie.

Above all, though, the movie’s biggest problem has nothing to do with bad storytelling or bad filmmaking, or even a better climax. Far from it! The biggest problem is that the movie has a very strong New Age pagan worldview promoting impersonal Eastern monism, a worldview that, ultimately, is irrational and warrants strong caution.

The setup for the story is that a new threat to the new republic has arisen. A group of really bad guys calling themselves the First Order (and still using the old empire’s cloned storm troopers) is trying to destroy the republic. Meanwhile, General Leia Organa has sent her best pilot, Poe Dameron, to find her brother, Luke Skywalker, who disappeared years ago. Poe is headed to see a man who might have a map to Luke’s whereabouts. If the republic’s resistance fighters can find Luke, perhaps he can raise up a new Jedi order to defeat the First Order.

Eventually, everything depends on a repentant storm trooper whom Poe names Finn and a feisty female scavenger named Rey. Will the ambivalent Force be with them?

STAR WARS: THE FORCE AWAKENS is, in many ways, the STAR WARS movie that fans and moviegoers have been longing to see. With STAR WARS screenwriting veteran Lawrence Kasdan (SILVERADO) and Director J.J. Abrams (STAR TREK) on board, THE FORCE AWAKENS has a tight script with lots of exciting action and great characterizations. The movie makes excellent use of veteran STAR WARS performers Harrison Ford, Carrie Fisher and Mark Hamill. After all, the story’s premise involves the hunt for the missing Luke Skywalker, Hamill’s iconic hero. That said, the movie relies the most on Harrison Ford’s lovable rogue, Han Solo, and his trusty companion, Chewbacca (Peter Mayhew). Their appearance early in the movie will get a big cheer not only from STAR WARS fans but also from movie lovers everywhere.

Also holding the film together are newcomers Daisy Ridley and John Boyega, who play Rey and Finn. Daisy Ridley in particular is a real find. Her appearance is one of the most striking first appearances in a major movie role since . . . well, since Harrison Ford first donned the persona of Han Solo in the original STAR WARS in 1977. As for Boyega, he easily fits in well with whoever is onscreen, whether it’s Daisy Ridley, Harrison Ford, Oscar Isaac as Poe, or even Chewbacca. To top it all, Adam Driver makes an imposing antagonist as the lead villain, even when he takes off his mask.

Director J.J. Abrams is one of the best action directors around. THE FORCE AWAKENS is his best movie since MISSION: IMPOSSIBLE III. He also does very well with all the actors. A few lines of expository dialogue occasionally let him down, John Williams’ newer music is sometimes a little repetitive, and the script should have developed Oscar Isaac’s character a bit better. Still, THE FORCE AWAKENS has plenty of nifty twists, exhilarating action, nostalgic moments, clever one-liners, and emotional scenes to help Abrams keep things moving and keep viewers engaged.

All in all, therefore, STAR WARS: THE FORCE AWAKENS is clearly one of the better popcorn movies of the year. However, despite its strong moral elements and lightly conservative, but strong, opposition to totalitarian bullies, THE FORCE AWAKENS has a strong New Age pagan worldview overall.

For instance, the movie has a couple mystical moments where characters establish an emotional connection to the Force or through it. In regard to the infamous Force, the movie also promotes modern monism, a New Age theology claiming that there’s a universal, but impersonal, energy or “Force” that is part of everything and surrounds everyone. This is typical STAR WARS mythology. However, in THE FORCE AWAKENS, it’s suggested a couple times that there must be a “balance” not only in the Force but also between the “good side” and the “dark side” of the Force. This is Non-Christian Eastern monism and moral dualism.

In this light, it’s interesting to note that these lines in the movie logically contradict the rest of the story, which clearly and strongly says the good must defeat and overcome, if not destroy, the dark side. The movie also suggests, in a redemptive way, that characters who succumb to the dark side can actually redeem themselves by rejecting the dark side and coming into the light. That’s not really “balance.” It also reflects an ethical monotheistic theology, not a monistic, pantheistic one where morality is “maya,” or an illusion.

Thus, Christians, and especially Christian parents and grandparents, should teach their children and other people about the logical contradictions and irrational mysticism of the STAR WARS movies, including THE FORCE AWAKENS. They should also note how such New Age thinking differs from the ethical monotheism and redemption of the Gospel of Jesus Christ and the enlightenment and divine fellowship or communion that comes from a personal relationship with Jesus and from the power of the Holy Spirit.

MOVIEGUIDE® recommends people focus on the positive moral and redemptive content or messages in STAR WARS: THE FORCE AWAKENS. Strong or extreme caution is warranted when it comes to the movie’s confused, impersonal, pagan monism. Christians have a better, more personal “Force” – our Lord and Savior, Jesus Christ, who created everything and redeems us and comes to us through the personal, divine power of the Holy Spirit.

Parents please teach your children to be media wise. A great way to learn how to teach them to keep the faith and be media-wise is by reading THE CULTURE-WISE FAMILY®.