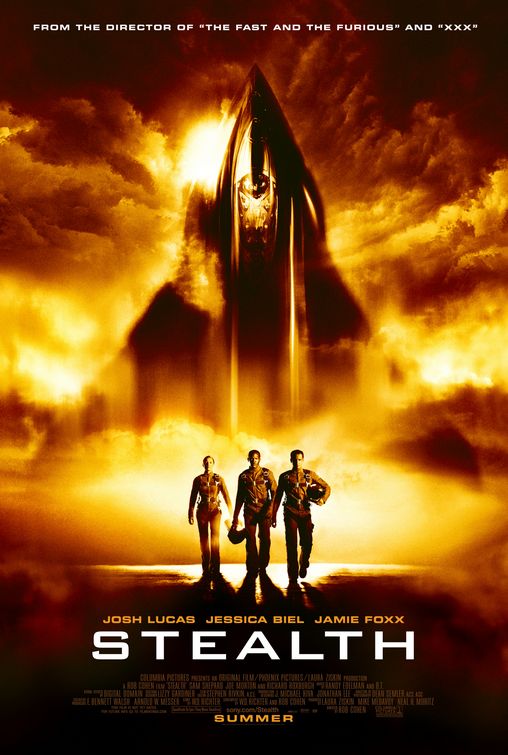 In STEALTH, set in the near future, three hotshot Navy test pilots, including two men and a woman, are assigned to new hypersonic jet fighters designed to take out terrorist targets with precision bombing. On their first assignment, their commanding officer introduces them to their new wingman, an unmanned jet using an advanced computer with artificial intelligence, nicknamed EDI ("Eddie"). Although they are hesitant about "taking the human pilot out of the equation of war," their first mission is very successful because of the drone's help. On their return back to the aircraft carrier, however, lightning strikes the drone's computerized brain. "Eddie" now has a mind of its own, and only the three pilots can stop it.

Despite some terrific special effects, STEALTH lacks depth in the beginning. The movie's second half takes some unexpected twists, however, leading to an interesting take on loyalty, honor, service, teamwork, sacrifice, moral judgment, and human nature. The movie has a strong moral worldview with strong patriotic elements, including positive references to God and the Holy Trinity. These positive elements are regrettably marred by some light sexual references and plenty of foul language, including one "f" word.

(BB, PP, C, Pa, FR, AC, LLL, VV, S, N. A, D, M) Strong moral worldview with positive references to God, the Lord and prayer at an ecumenical religious service, strong patriotic elements and a positive reference to the Christian doctrine of the Holy Trinity, marred by some sly pagan comments and references to male navy pilots taking women to bed and one false religion scene where man briefly watches Buddhist monks praying in front of Buddha statue in Thailand, and some anti-Communist and anti-fascist content where Communist soldiers and terrorists are unprincipled villains, but most American soldiers are shown as tough but compassionate; 34 obscenities (including one "f" word and two references to having to go urinate in the bathroom), two or three strong profanities (one sounded garbled and it was hard to tell what exactly was said) and one light profanity; some war violence includes explosions, missiles fired and cause multiple explosions, planes hit by lightning and flying debris, explosion rips through hangar door and trucks and people go flying backwards, people shot by automatic weapons fire, sniper bullet hits woman's shoulder, man suffers lethal injection during struggle, small nuclear cloud fallout sweeps over village, an implied suicide, and pilot must eject from jet in lengthy and scary ejection and parachute scene; no sex or bedroom scenes but sly comments and references imply that male fighter pilots take women to bed and modern dancing at nightclub; female cleavage, woman in skimpy bikini and upper male nudity; alcohol use; smoking; and, lying, commanding officer cuts corners and orders murder of one of his officers, and movie suggests computerized machines can actually take on human characteristics.

STEALTH is a Navy pilot movie set in the near future about an elite group of three test pilots flying the latest stealth fighter jets called Talons. The pilots will be using the swing-wing, hypersonic bombers to take out difficult terrorist targets overseas. Led by Lt. Ben Gannon, the team includes a female pilot, Lt. Kara Wade, and an African-American pilot, Henry Purcell.

The team is assigned to an aircraft carrier. On the carrier, their commanding officer, Captain George Cummings introduces them to their new wingman, which is an unmanned jet using an advanced computer with artificial intelligence, nicknamed EDI.

Ben is hesitant about “taking the human pilot out of the equation of war,” but Cummings orders the team to execute their first real mission alongside EDI. With EDI’s help, the mission is a great success, but on the way back, EDI is struck by lightning. The drone’s computerized brain changes in unpredictable ways. On their next mission against a nuclear-armed Muslim warlord in a former Russian province, EDI goes against orders and executes the mission, causing nuclear fallout. The danger escalates when EDI decides to execute a top-secret war games scenario in Russia. Only Ben and his team can stop it.

In portraying the next level of air technology, STEALTH is energized with the latest movie technology. The flying sequences are very cool, especially a sequence involving a pilot ejecting from a jet and an explosion involving a flying refueling tanker. According to the movie’s production notes, the filmmakers used a 100-ton gimbal to realistically simulate the twists, turns and rolls that a real jet makes. Adding to these effects are some unexpected twists in the movie’s second half, which may remind experienced viewers of the exciting final scenes in 1954’s THE BRIDGES AT TOKO-RI, one of the best American movies made about the Korean War.

STEALTH is not as good as that movie, however. Until the second half gets going, the characters lack depth, and it’s hard to get emotionally involved with the cliché story about another computer brain going awry.

The second half of the movie, however, has some interesting twists on loyalty, honor, service, teamwork, sacrifice, and human nature, concepts that are very important to the men and women who serve in our military forces. The movie extols positive human virtues, such as moral judgment, over cold-blooded technology. It also contains some positive references to God and the Christian concept of the Holy Trinity and includes elements where Communist soldiers and terrorists are unprincipled villains, but most American soldiers are shown as tough but compassionate. All of this gives STEALTH a strong moral worldview with strong patriotic elements.

STEALTH contains plenty of foul language, however, including one or two strong profanities and one “f” word. There is also a romantic angle between Ben and Kara and between Henry and an Asian woman when the pilots go on furlough in Thailand. The movie also contains some sly comments and references to Henry and Ben taking women to bed, but there are no bedroom or sex scenes. The pilots also visit a nightclub where there’s dancing and have drinks at a couple restaurants. Finally, Kara shows up in a skimpy bikini in one scene.