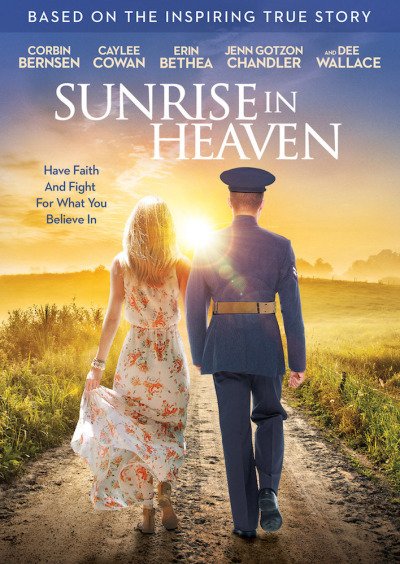 SUNRISE IN HEAVEN tells the story of Jan and Steve, a married couple who experience a life-threatening accident. While Jan struggles with the severity of Steve’s injuries, the story takes viewers back to the beginning of the couple’s relationship in 1964. Jan’s father is a general in the Air Force and forbids her to date any guy in the Air Force because he claims none of them are good. That becomes a problem when Steve has to ask the father’s blessing to marry Jan. Meanwhile, present-day Jan struggles with the severity of Steve’s injuries from the crash.

The flashbacks and flashforwards in SUNRISE IN HEAVEN interrupt the movie’s dramatic flow. Also, the actors seem as if they’re trying too hard. That said, SUNRISE IN HEAVEN has a strong, inspiring Christian worldview with many Christ-centered prayers and Scripture references. The movie is about having faith in God and living according to the Bible. However, one scene shows two men going to shoot guns at targets, and the father’s lack of understanding is somewhat annoying. MOVIEGUIDE® advises caution for younger children for SUNRISE IN HEAVEN.

(CCC, BBB, V, M):
Dominant Worldview and Other Worldview Content/Elements:
Very strong Christian worldview with several depictions of prayer to God in Jesus’ name, Scripture is referenced throughout, a Christian wedding takes place, the main characters find themselves in a counseling relationship with a pastor, a woman who put her faith in science and medicine is seen coming back to the faith of her childhood and putting her faith in God, a woman says her “luck “of being alive wasn’t luck at all but was God, and parents love their daughter more than anything
Foul Language:
No foul language
Violence:
Car accident is shown where one character has a little blood on their head, guns are shot by two men in the Air Force while practicing shooting targets
Sex:
No sexual immorality, just a married and dating couple kisses four times
Nudity:
No nudity
Alcohol Use:
No alcohol use
Smoking and/or Drug Use and Abuse:
No smoking or drugs; and,
Miscellaneous Immorality:
A friend encourages the main character to date a boy her whom father doesn’t want her to date, dating couple lies about how they met and what the man does, a strained sister relationship is shown but is resolved by the end of the movie, and a father is too overprotective and becomes rude and mean but eventually softens.

SUNRISE IN HEAVEN tells the story of an elderly married couple, who have just been in a life-threatening accident. As the wife struggles with the severity of her husband’s injuries, the movie takes viewers back to the beginning of their relationship in 1964.

The movie begins with Jan and Steve, an elderly couple who have been married their whole lives on a road trip. The trip gets cut incredibly short when they’re in a car accident. Jan comes out fine, but Steve suffers life-threatening injuries and has to be rushed to the hospital.

The rest of the movie is then told in a series of flashbacks. The audience is taken back to 1964 at an air force base in California. Jan is working on the base as a cafeteria lady, and Steve is a cadet. They meet as Steve is going through the lunch line, and he persistently flirts with her trying to get her to go on a date with him.

Jan’s father is a general in the Air Force and forbids her to date any guy in the air force because he claims none of them are good. Jan tries to follow his rules but is encouraged by her friend to go on a double date. Jan goes on the date with Steve, and they sit and talk for hours. Jan learns Steve is different from the other men and they begin dating.

While this is happening, the audience is taken back to the hospital. Jan learns Steve is paralyzed from the neck down and can’t breathe on his own. Jan and one of her daughters are seen praying and putting their faith in God. However, one daughter isn’t on the same page and insists they should listen to science and medicine instead. This causes Jan to lose faith for a short time and become angry with God. Jan turns selfish and wonders why God did this and why He isn’t listening to her prayers.

Jan’s attitude takes a turn in the right direction when the pastor, who counseled her and Steve, shows up at the hospital after one of Jan’s daughters called him. The pastor encourages Jan, who realizes that her Christian faith is all she has and that God isn’t the bad guy.

Cut back to 1964. Jan has introduced her family to Steve, and they think he’s a college student who’s preparing Jan for her college classes. This goes on for months, until one day when Steve is guarding the gate at the air force base, and Jan’s father realizes who Steve is and what he really does. This causes a huge riff between Jan, her father and Steve.

Steve soon learns he’s being transferred and asks Jan to marry him. However, Jan only agrees to marry Steve if he can get her father’s blessing.

Will Steve be able to get the father’s blessing? Meanwhile, present-day Jan is faced with the tough decision on whether to keep Steve hooked up to all of the machines or to let him go home to the Lord.

SUNRISE IN HEAVEN is extremely hard movie in which to get involved as a viewer because of all the flashbacks. Each time one portion of the movie seems to catch steam, it flashes backward or forward, and all emotion is lost. The acting is mediocre and almost seemed as if everyone was just trying a little too hard. The movie would have been stronger if it had stuck to the storyline of the young Jan and Steve because, most of the time, the scenes of the present day don’t really fit with the rest of the story.

SUNRISE IN HEAVEN has a very strong Christian worldview with many prayers and Scripture references. The movie is a story of having faith in God and knowing that, if you live according to the Bible, God’s plan for your life will come to fruition. However, there is a scene where two men go to shoot guns as target practice, and the father’s lack of understanding is somewhat annoying. MOVIEGUIDE® advises caution for younger children.

Rent or Buy SUNRISE IN HEAVEN: