TEA WITH THE DAMES

"An Inside Look at the Legacy of Four English Actresses" 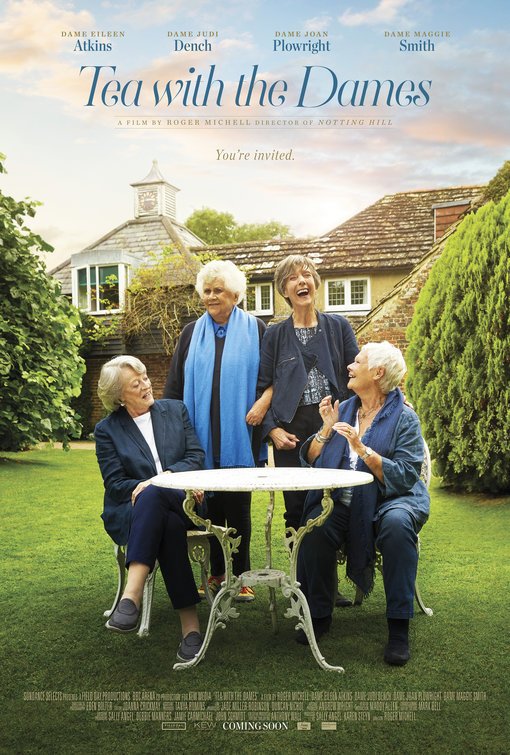 TEA WITH THE DAMES takes a humorous look at the world of acting from the perspective of four British actresses who achieved stardom both in England and the United States. Judi Dench, Maggie Smith, Eileen Atkins, and Joan Plowright retell the highlights of their acting careers, including their first roles. They also highlight some of their most notable recent roles, including Maggie Smith’s stint in DOWNTON ABBEY and the Harry Potter movies. Through lighthearted commentary, their lifelong friendship shines through from the first scene until the last.

These four dames leave nothing unspoken when they dish on what it was like both on and off screen. They give moviegoers an inside look at what it was like acting as a woman from the 1950s through today. TEA WITH THE DAMES is relatively clean, although the few times one dame uses an obscenity can be off-putting as well as one description of two people engaged in sexual relations. Because of this content, the movie is inappropriate for younger teenagers. Older teenagers and adults should exercise caution before viewing TEA WITH THE DAMES.

(Ro, L, V, S, A, D, M):
Dominant Worldview and Other Worldview Content/Elements:
Dominant Romantic worldview of chasing after one’s personal dreams and making a living;
Foul Language:
Six obscenities (including one “f” word);
Violence:
Low level of violence includes one depiction of a man slapping a woman across the face, one woman shoving a police officer, and depiction of police officers kicking a protestor;
Sex:
One description of two people having sexual relations, one scene of two people kissing, and a couple sexual euphemisms;
Nudity:
No nudity;
Alcohol Use:
Women sip champagne;
Smoking and/or Drug Use and Abuse:
One scene of a woman smoking, one scene of a man smoking; and,
Miscellaneous Immorality:
Low level of miscellaneous immorality and behavior/worldview problems: such as lying, dysfunctional family relationships, and bad role models.

In TEA WITH THE DAMES, four actress friends, (Judy Dench, Maggie Smith, Eileen Atkins, and Joan Plowright) get together in the English countryside to laugh and reminisce about when they met and other highlights of their careers and friendship together. All four ladies have been labeled British Dames by the Queen of England.

Eileen Atkins began her career as a dancer from ages three to five. She did her first play at 10-years-old. Judi Dench was asked to join a royal stage company called the Royal Court as a teenager. Maggie Smith’s first play was INTO THE WIND. She’s one of the few actresses to have won a Tony Award, an Oscar, an Emmy, and a Golden Globe award.

All four actresses recalled they had severe stage fright before going on stage. They spoke about the role of naturalism in acting, including the difficulty of performing plays like Shakespeare in a natural way. Joan Plowright said the key to incorporating naturalism is to “bring it down to your size rather than reaching up.”

They told stories about what it was like to work with famous actors like Sir Laurence Olivier and Frank Finley, although Maggie Smith quipped that when Olivier slapped her so hard during the play OTHELLO, “it was the only time she had seen stars at the National Theatre.” Joan Plowright was married for 28 years to Olivier until his death in 1989 and starred with him in Tony Richardson’s brilliant 1960 film version of their acclaimed play THE ENTERTAINER, written by John Osborne.

When asked about some of the roles they played, Maggie said in THE LETTER, her first role out of drama school, she played a Chinese boy. All the Dames commented about how they were turned down for roles because they were considered not pretty enough.

During their acting careers, they also balanced their home lives and the birth of their children with their careers. Each shared humorous stories about their children as well as how they became a Dame. This is an honor bestowed by the Queen to any person for a notable major, long-term contribution in any activity, usually at a national or international level. All four received it for their contributions to the dramatic arts. Interestingly enough, Eileen said her invitation to become a Dame got lost in the mail. When asked if she was going, she said she wanted to think about it. Joan said she accepted “because everyone else had.” The movie shows footage of each of them becoming a Dame as Prince Charles gives them their honor.

They also commented on what it was like to work with their husbands who were also actors. Maggie and Eileen both said it got tricky because they were immediately dubbed, “The Golden Couple.” Also, some husbands weren’t as well known, which gave way to pride and jealousy.

Perhaps, the movie’s best part is when they were asked what they would say to their younger selves. Joan said, “Get in touch with more mindful people at nearly every age and learn about how the brain influences the body.” Eileen said, “Don’t be bad-tempered and confrontational, and listen more.” Maggie said, “When in doubt, don’t.” Judi said, “Try not to be so susceptible to falling in love.”

Joan summed up the movie best when she says the difference between truth and illusion both in life and in acting is finding your way into being in the mood to play the part even when you don’t want to do it. Her words seemed relatable to almost anyone.

Filmed in England, the English countryside makes a beautiful backdrop for most of the scenes as they talked. Use of English words not readily used in the United States added to the movie’s charm. Happily, the movie is fairly clean. However, the use of six profanities plus a description of sexual relations make the move inappropriate for teenagers and children. Adults should use caution.

Watch TEA WITH THE DAMES: