"Is a Lie Ever Acceptable?" 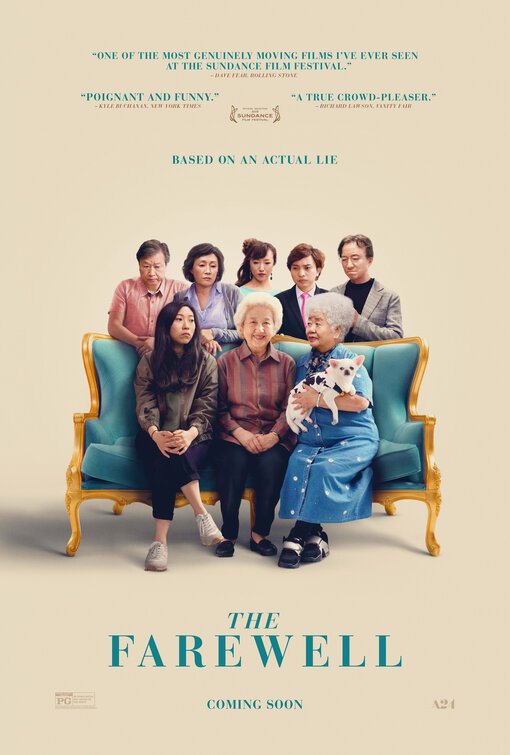 THE FAREWELL is a Chinese language production with some Chinese American actors. A young woman’s beloved grandmother, who lives in China, is dying, but grandmother doesn’t know it yet. Her family isn’t about to tell her either, because they feel it’s better to keep Grandma in the dark so she won’t spend her last days in sorrow while her relatives grieve her loss and everyone drowns in tears. The family devises a clever plot to stage a fake wedding to give everybody an opportunity to be with her and celebrate her, without her ever knowing the real reason.

THE FAREWELL is well made. The photography is attractive and, though nondescript, the soundtrack is acceptable. The characters are loveable and endearing. They subscribe to pagan, unbiblical traditions and values, such as honoring the dead, condoning lying if it’s for a good cause, and drinking heavily in celebration. However, THE FAREWELL contains some moral elements celebrating family and positive references to an act of kindness by a Christian pastor. THE FAREWELL steers clear of foul language , but MOVIEGUIDE® advises caution for older children.

(Pa, B, FR, C, N, AA, MM):
Dominant Worldview and Other Worldview Content/Elements:
Light pagan, mixed worldview with some morally uplifting elements celebrating family, some pagan superstitions and traditions are believed, but there are positive references to a Christian pastor who let the main character practice her piano using the church’s piano any time she needed
Foul Language:
No foul language
Violence:
No violence, but an elderly character is dying of cancer
Sex:
No sex
Nudity:
Man appears drunk in his underwear and the nude back of main female character is shown with marks on it from a spa treatment
Alcohol Use:
Heavy drinking by several characters, including the groom in the wedding scene, and brief drunkenness
Smoking and/or Drug Use and Abuse:
No smoking or drugs; and,
Miscellaneous Immorality:
Frequent lying and deception, and honoring the dead at a cemetery.

Well received at the Sundance Film Festival, the Chinese language production THE FAREWELL also had a sold out audience at the Atlanta Film Festival, where it drew cheers and applause at its conclusion. It’s a bittersweet comedy that sometimes in a tongue-in-cheek fashion looks at that difficult time when elderly members in a family come to the end in life for illness or simply plain old age. The movie explores how their closest relatives decide to deal with the inevitable in the face of newly acquired cultural differences. Occasionally funny, occasionally crude and with several characters getting drunk at various times, THE FAREWELL is devoid of any serious religion. Instead, it opts for a potpourri of cultural mores and traditions.

The movie begins when the word is passed to family members that Grandma Nai Nai (Zhao Shuzhen) in homeland China has contracted lung cancer and only has weeks to live. The geographically dispersed family of Chinese origin currently resides in a couple different continents, including China. They decide to come together at Grandma’s home to say their goodbyes, without letting Grandma get even a whiff of what’s really happening. As it turns out, it’s not that easy for her children and grandchildren, especially her granddaughter, Billi (played by the Chinese-Korean American actress Awkwafina). Billi wants to travel to China and say goodbye to Nai Nai, with whom Billi has held a long distance loving relationship during her coming of age.

The family goes ahead with their plan to travel to Grandma in China. They quickly come up with a clever ploy to keep Grandma in the dark by hastily assembling an almost surreal, rather whimsical, fake wedding. A wedding is a perfect excuse for the entire family to reunite and see Grandma off without her ever realizing they’re awaiting her demise.

Everything appears to be going well, but Billi starts having second thoughts about keeping the elderly matriarch in the dark just to make the rest of the family feel better. What happens next is an up and down emotional rollercoaster brimming with pathos, deadpan expressions and lots of alcohol and Chinese food as the gathered relatives struggle to cover up their angst and hide their tears from Grandma, who cheerfully and unsuspectingly welcomes them to her home and shares in all the wedding preparations. Occasionally, however, Grandma wonders why some family members look so forlorn while she’s never felt better, except for that nagging cough, vestiges of a recent cold she’s still trying to overcome. The elephant in the room, of course, is the shadow that hangs over everyone. Whenever the lie starts to surface, it’s quickly suppressed with explanations like it’s just okay because it’s an old Chinese tradition, and why make the dying person suffer the terrible emotional stress of their own impending death? Even the doctor interpreting Nai Nai’s X-rays plays along with the farce.

The question then becomes, should Grandma be informed at some point, and if so when? For the present, however, the family decides to just enjoy the wedding, reminisce about old times, and let everybody get reacquainted with each other. After all, time is fleeting, and they may never see each other again, and they certainly won’t see Grandma again.

THE FAREWELL is an independent production. However, the filmmakers manage to bring to the screen a thoroughly professional production with competent photography and an audio mix which at times may have been compromised by a less than optimal theater sound system at the screening MOVIEGUIDE® attended. The movie’s performances have a much wider range, from excellent to so-so, but they still drive the narrative smoothly forward. Although Awkwafina has been lauded for a command performance, and the movie is mainly about how she approaches the whole event, she doesn’t take the oxygen out of the room when she mixes in with the rest of the cast. Han Chen as the reluctant groom and Aoi Mizuhara as his Japanese bride-to-be, Aiko, are plain loveable. Billi’s parents, played by Tzi Ma and Diana Lin, could be anybody’s parents. They come across as genuine, warts and all. Finally, Zhao Shuzhen as the unsuspecting terminal grandmother makes it a point of showing many of the qualities that make families mourn so deeply when they depart.

THE FAREWELL is not without some inherent ethical and spiritual questions, as well as some occasional crudeness. The end result, though, is nevertheless a warm approach to a difficult subject and to the clash of cultures that can occur when families repatriate and later reunite. For example, at one point when Billi is asked if she still plays the piano, her parents recall how they attended a Christian church some time ago, and Billi at the time wanted very much to learn and play the piano, but her parents couldn’t afford one. It just so happened that the church’s pastor had overheard their conversation about being unable to afford a piano. When they were about to leave the church, however, he walked over to them and, handing Billi a key to the church door, told them she was welcome to come and practice the piano any time she wanted. The clash of cultures is palpable at that moment by the deadpan look in the faces of the other family members as they hear of the story about the Christian pastor. However, their reaction also demonstrates that, at a basic level, common human emotions such as love, fear, generosity and kindness can be an important set of human traits that can bridge almost any cultural divide and bring rapprochement, and possibly more, no matter people’s differences.

All in all, THE FAREWELL is a movie that, aside from some clear shortcomings such as heavy drinking, occasional crudeness, and a pagan worldview, nevertheless has a warm, gentle, loving side that celebrates family. For the above reasons, however, MOVIEGUIDE® advises caution for older children.