"Anything Is Possible with God" 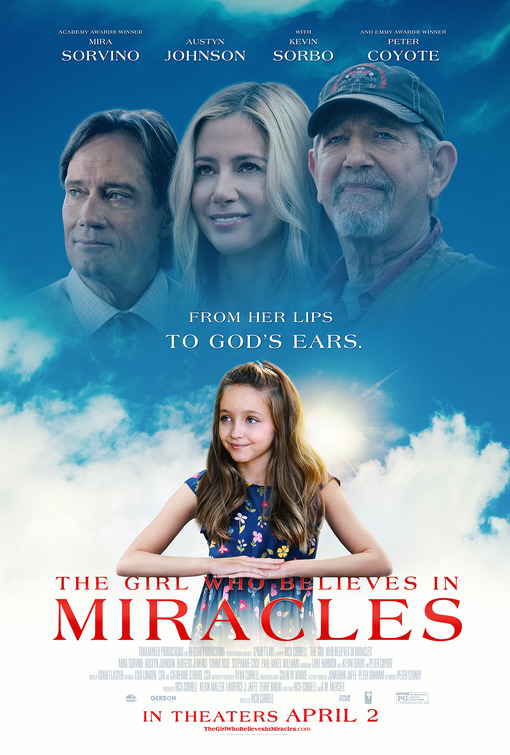 THE GIRL WHO BELIEVES IN MIRACLES introduces a girl named Sara who has a strong Christian faith. Sara finds out she can perform miracles after she prays to God to heal a dead bird. Throughout the movie, Sara heals injured animals, blind children and children who are paralyzed or gravely sick. Sara’s family becomes concerned when Sara falls ill and faints. They find out Sara has an inoperable brain tumor that could take her life. After performing many miracles in her community, Sara will need a miracle to survive.

(CCC, BBB, V, A, D, M):
Dominant Worldview and Other Worldview Content/Elements:
Very strong Christian, Biblical worldview stresses faith, prayer, family, miracles, morality, forgiveness, hope, and using the Bible, a man prays to God for forgiveness, girl recounts stories from the Bible like Lazarus, girl prays to God for thanks, girl’s family attends church, girl recites The Lord’s Prayer, boy wears a cross necklace, a nonbeliever is converted, young girl heals animals and heals people who are injured or blind, Jesus is seen on a lake, girl gives credit to God for her miracles, and resurrection through Jesus is supported
Foul Language:
No foul language
Violence:
Boy shoves another boy in a soccer game, a man throws a punch and breaks up a fight, three boys crash off bikes, a dog gets hit by a car, and a high-speed chase in a thunderstorm occurs
Sex:
No sex
Nudity:
No nudity
Alcohol Use:
Teenagers drink beer
Smoking and/or Drug Use and Abuse:
Teenager smokes a cigarette; and,
Miscellaneous Immorality:
Two boys steal food without paying, and a girl is taken from the hospital without her parents’ consent.

THE GIRL WHO BELIEVES IN MIRACLES follows the story of Sara Hopkins a young girl who has been granted the gift of performing miracles through her Christian faith. THE GIRL WHO BELIEVES IN MIRACLES is inspirational and moving and provides quality Christian content for families searching for a positive message. The movie highlights the importance of miracles and family during difficult times and reminds people that anything is possible through faith in God.

THE GIRL WHO BELIEVES IN MIRACLES introduces the main character, Sara, as she attends her brother’s high school soccer game. Sara’s brother Danny gets shoved to the ground by his opponent, and the other team scores a goal. Sara’s grandfather, Sam, suggests that Sara prays to God for Danny’s team to win. Sara follows through with his request but wonders why her prayer didn’t work after Danny’s team lost. Sam tells Sara that “sometimes the answers to our prayers are not revealed to us in the ways we think they will be.”

After the soccer game Sara, Danny and Danny’s girlfriend, Cindy, hike to the lake to catch fish. Sara spots a dead bird and prays over it for the entire time at the lake. Just when they are about to leave, the bird flies out of Sara’s hands. Danny and Cindy are skeptical that Sara brought the bird back to life and believe it was caused by the wind. Although no one believes Sara, she’s secure in her faith and tells her best friend Mark about the bird.

The next day, Sara and Mark are confronted by bullies who make fun of Sara for her bird story. One of the bullies is the opponent from the soccer team who pushed Danny. The opponent’s dog gets struck by a car and is perceived to be dead. Sara heals the dog and brings him back to life. Also, Sara heals her friend Mark who was paralyzed waist down after a car accident. Mark walks for the first time in a year since the accident.

Word starts traveling around town that Sara has the gift of healing the sick and injured. Many people from all over the community travel to Sara’s house for the chance to be healed. Sara heals a girl with cancer, a girl who is blind, and a boy who’s paralyzed. She gives credit for her abilities to God who is “standing by her side the entire time.” After she heals the three children, Sara suddenly faints and becomes ill.