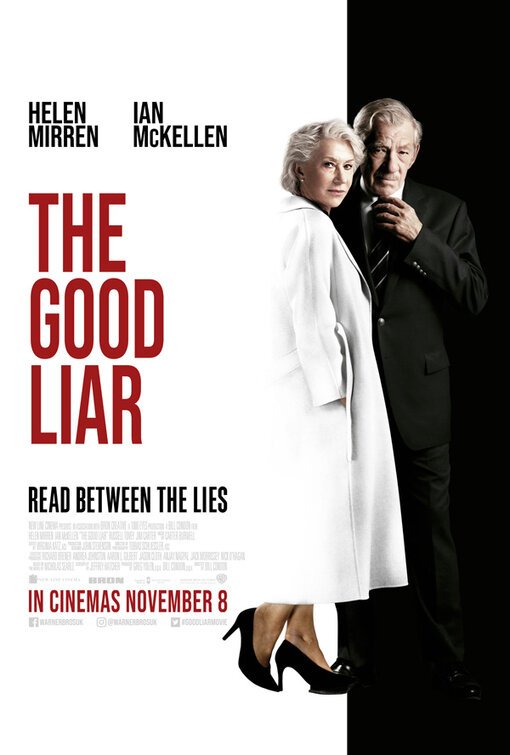 THE GOOD LIAR opens with two widowed elderly people, Roy and Betty, engaging in a conversation on the Internet, then going to dinner with each other. Roy seems charming. However, after Betty heads home, Roy goes to a London strip club, where he meets with three other men in a back room and is revealed to be a con artist. After an elaborate scheme succeeds, Roy must hide. So, he pretends to be frail to win Betty’s sympathy and be invited into her house in an exclusive suburban community. Betty’s adult grandson disapproves, and he turns out to be right. Roy’s trying to scam Betty of several million dollars. Will he succeed, or might Betty have some surprises of her own?

THE GOOD LIAR is extremely well-written. It also delivers two great performances by Helen Mirren and Ian McKellen. However, the final twists defy logic. Also, there are at least 15 “f” words and some disturbing violence involving murder and rape. That said, THE GOOD LIAR has a moral worldview where justice is achieved, but the justice is tinged with a revenge. So, MOVIEGUIDE® advises extreme caution.

(B, Pa, Ab, Ho, P, AC, LLL, VV, SS, NN, AA, D, MM):
Dominant Worldview and Other Worldview Content/Elements:
Light moral worldview where an evil man gets his comeuppance, but the justice is tinged with some revenge, plus light homosexual references in two scene, and some light patriotic and anti-socialist elements are shown in the Allied occupation of Berlin after the defeat of the National Socialists in World War II (two men are trying to track down a National Socialist war criminal)
Foul Language:
22 obscenities (mostly “f” words) and four light profanities
Violence:
Strong, sometimes intense violence is just under being extreme with a man seems to be stabbed in his eye and then is pushed in front of a subway car with it being implied that his head gets struck, three men wrestle violently for control of a gun, and one man eventually shoots the other two, dead man has a pool of blood under his head, one man has a blade scraped against his neck, and some blood is shown, and the wound leaves a scar, a man’s hand is struck with a meat tenderizing hammer once, and then he’s heard screaming as it’s implied that the attack keeps happening, a character has bloody palms after searching for something underneath some floorboards under a carpet, a woman seems to have a fainting spell of some kind and has fallen to the floor, a 15-year-old boy teenager rapes a teenage girl, a woman and man wrestle each other in a vicious fight, there are screams of another man being beaten, and it’s related that one man had a stroke after being beaten, and a scene shows the man in his wheelchair after his stroke with a lopsided mouth and anger in his eyes
Sex:
Partially depicted rape between a 15-year old boy and teenage girl, boy is seen earlier forcing a kiss on her older sister, one man gives his homosexual partner a peck on the cheek as he puts his arm around him, and an elderly man tries to sweet-talk his way into having sex with an elderly woman, who declines
Nudity:
Upper and rear female nudity when an elderly man walks through a strip club
Alcohol Use:
Alcohol use, and a man is seen getting drunk by himself by drinking an entire bottle of liquor
Smoking and/or Drug Use and Abuse:
Smoking but no drugs; and,
Miscellaneous Immorality:
Movie hinges on a con man trying to take advantage of a woman so there’s deception and thievery throughout, some revenge is mixed with the justice meted out in the movie’s plot, teenage boy in Nazi Germany makes a false accusation out of spite and revenge that ruins a family, and fraud succeeds once and is attempted another time, but the tables are turned ,and villain gets his just desserts in the end.

THE GOOD LIAR is a thriller pitting two of England’s greatest living actors, Helen Mirren and Ian McKellen, in the story of an elderly con man who tries to romance an elderly widow in the hopes of robbing her of her fortune. For the most part, THE GOOD LIAR is a riveting, nicely acted thriller with a light moral worldview about getting justice against an elderly con man and murderer, but the twist at the end seems to defy logic, and the movie contains about 15 “f” words, some disturbing violence and a brief positive portrayal of a homosexual relationship.

The movie opens with Roy Courtnay (Ian McKellen) and Betty McLeish (Helen Mirren) engaging in a conversation on a dating website and then going to dinner. Roy seems charming, and both are widowed, with Betty having been widowed just a year ago, and Roy having lost his wife three years ago.

However, after Betty heads home with her grandson, Steven (Russell Tovey), Roy zips off to a strip club, where he meets with three other men in a back room and is revealed to be a con artist. Roy has set up an elaborate fake business deal with three other men to take advantage of two Russian businessmen, and he is shown ruthlessly manipulating the situation even further.

After his elaborate scheme succeeds, Roy must go into hiding, so he delves into his relationship with Betty. He pretends to be extremely frail in order to win her sympathy and be invited into her home in an exclusive community far away from Roy’s bustling city existence. However, this arrangement meets with disapproval by her grandson, Steven.

Roy is all charm and seems like a gentleman, but it turns out Steven is right and Roy is out to scam Betty of her millions. As he insinuates himself ever further into her life, he also finds he has to dodge not only Steven’s suspicions but the risk of getting caught for a lifetime of schemes.

Will Roy manage to empty Betty’s bank accounts, or might she have some surprises of her own?

THE GOOD LIAR offers a tour de force showdown of two of England’s greatest living actors in Mirren and McKellen, on screen together for the first time. It also is directed by Bill Condon (DREAMGIRLS and the live action BEAUTY AND THE BEAST and), who has built a career upon an eclectic mix of genres. Condon sets a mood of disquieting suspense from the beginning. At first, it seems that the screenplay by Jeffrey Hatcher will provide these talents with a great setup for a classic thriller. The slowly revealed manipulations of Roy are parceled out for maximum tension, and the two acting icons deliver rich performances, with McKellen particularly strong as he often shifts from charming to ruthlessly evil on a moment’s notice.

Much of the movie is extremely well-written and keeps viewers on their toes. However, there are major twists before the final act that are a fun surprise at first, yet become so complicated they defy logic if viewers pay close attention. By the end, thought, the twists are likely satisfying enough to send most viewers home happy.

THE GOOD LIAR shows most of its violence in brief flashes, or in relatively discreet fashion. A man is seen briefly walking through a strip club past two women who are only wearing thongs, covering their genitals but barely nothing else. In addition, a man is seen getting his hand crushed with a meat tenderizing hammer before the scene cuts away while his screams from other hits continue to be heard. In another scene, a man is stabbed in or near his eye before being pushed in front of a subway car, but both of these are seen without blood. A three-man fight over a gun features two non-graphic shootings but a bloody head after. Also, one man has a blade run against his neck, leaving a scar. (SPOILER FOLLOWS) There is also a choking and wrestling fight between a man and a woman. In addition, the movie has elements of revenge mixed with justice Finally, add in about 15 or more uses of the “f” word, some other foul language and an implied rape scene between two teenagers, and THE GOOD LIAR that demands extreme caution. Also, the movie’s worldview is moral in that justice against a con man and murderer is finally achieved, but the justice is tinged with some revenge.